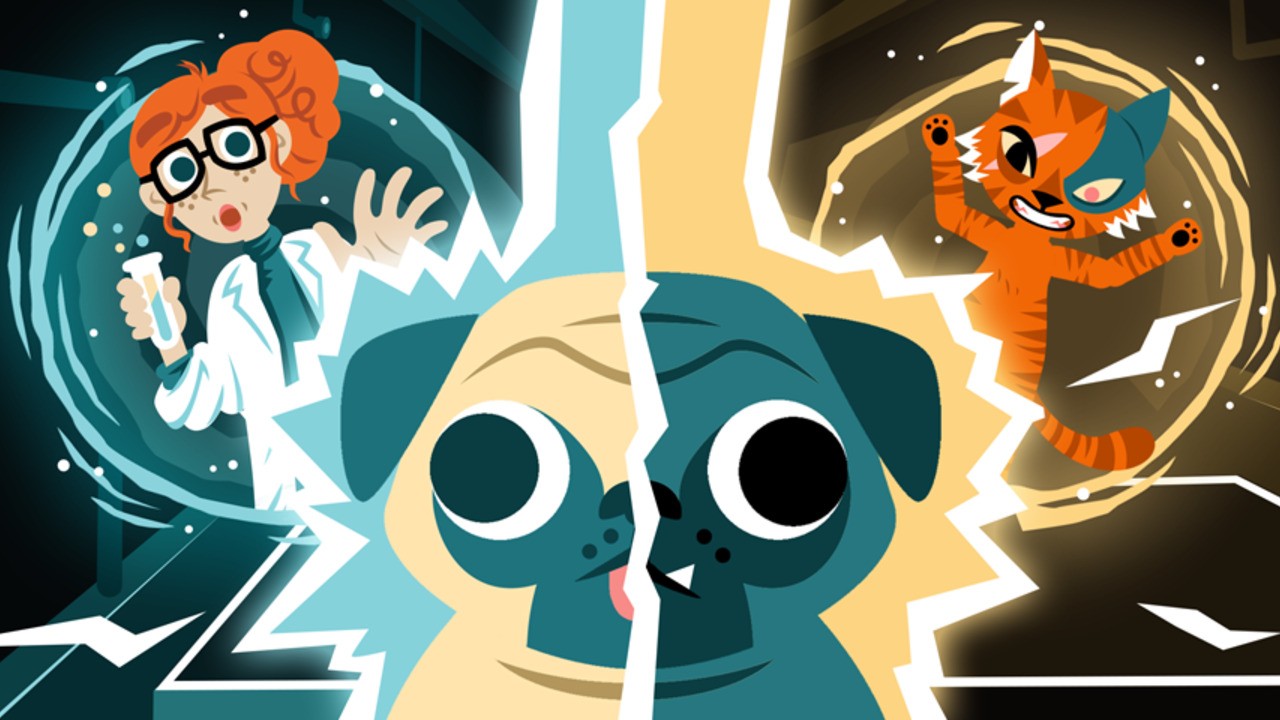 Switch might be a natural home to platformers but outside of 2018’s excellent Runner3, and the less-excellent Bubsy: Paws On Fire!, we’ve seen little of the runner sub-genre. Targeting the dog lovers, Double Pug Switch from The Polygon Loft seeks to fill that niche. Bringing us a challenging platformer, you play as Otis, adorable pug companion to the Professor. After a lab accident causes a portal to open, Otis gets sucked into an alternative dimension alongside Whiskers, the Professor’s cat. Finding himself empowered, Whiskers wishes to remove dogs from existence, seeking a cat-only dimension and renaming himself Lord Sker.

Only you can stop him and this campaign comes with 40 levels, evenly divided between five worlds that end (predictably) with a Lord Sker boss fight, which only involves dodging his attacks. As you’d expect from a runner, Otis runs automatically once the level begins and won’t stop until you reach the end. Your only input is to jump and shift dimension, allowing him to avoid traps or access certain platforms. It’s a basic concept but for a smaller game, it does the job. For added variety, some levels also offer powerups, like bounce pads to make larger jumps, or the ability to shrink Otis to fit through tiny gaps.

If you run through a level perfectly, they can be completed quickly, but chances are that you won’t succeed without dying several times. There’s a lot of trial and error here, so if you hit a wall, fall into a bottomless pit or touch a spike, that’s game over, sending you back to the last checkpoint. Platforming feels very precise, almost frustratingly so in some instances, so one misstep can reset your progress. Mistakes are easy to make and repeated deaths over a slight miscalculation does become grating.

That said, completing a tough section is undeniably satisfying and though dimension swapping isn’t particularly unique (Hello Dimension Drive), it proved compelling enough to stick with. Double Pug Switch isn’t the longest game but offers replayability through collectable coins in each level. Gold coins are generously scattered but purple coins can only be caught upon completing tricky sets of obstacles. Both currencies can be used to buy cosmetic headwears for Otis, ranging from VR headsets to cowboy hats, letting you dress him up as you please.

Double Pug Switch might be frustrating at times but there’s still an enjoyable experience here. Bringing us fun but basic gameplay, it introduces one of gaming’s more adorable protagonists in a light-hearted adventure, though it won’t offer platforming fans anything particularly ground-breaking. With its lower price point, there isn’t much risk here if you’re a fan of runners and, as such, it comes with a cautious recommendation.