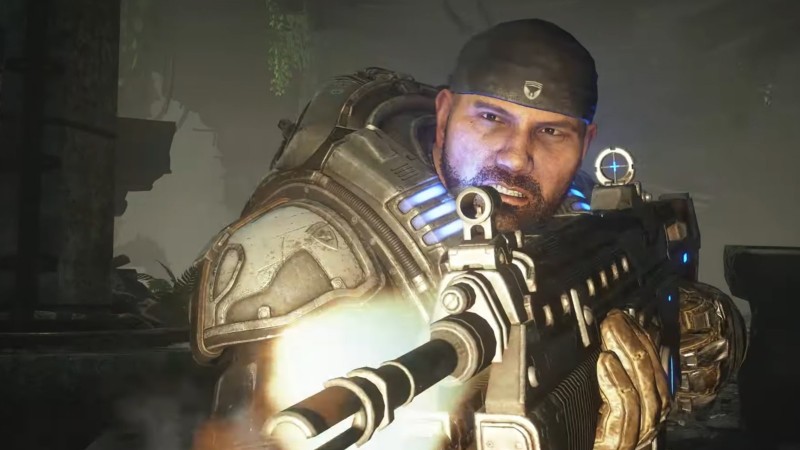 The Coalition announced a slew of big changes coming to Gears 5 when it arrives on Xbox Series X. On top of performance enhancements and new modes, the campaign gets a lot more animalistic with the inclusion of ex-WWE world champ and guardian of the galaxy, Dave Bautista.

After appearing as a multiplayer skin in the original version, players can now swap Marcus Fenix with Big Dave for the entire campaign. More than just a palette swap, Bautista even recorded new dialogue for the story. It should be stressed again that Bautista is not replacing Marcus Fenix in the campaign permanently. The switch is 100% optional.

The news should serve as a fun treat to Dave’s fanbase, as well as the big guy himself. The actor lobbied hard on social media last summer to portray Marcus Fenix in a Gears of War film, garnering a groundswell of support. That didn’t pan out (unfortunately) but this is arguably better. At least he gets to be Fenix in the medium the character originated from.

A new Game + brings new difficulty modes, character/weapon skins, additional achievements. For next-gen versions, look forward to 60 fps cutscenes and a 120 fps Versus mode. That’s on top of the 4K HDR, faster load times, and instant resume perks highlighted in earlier announcements. Combine all of this with an upcoming story expansion slated for fall, and Gears 5 has a busy holiday season ahead.

For more on Gears 5, check out Andrew Reiner’s positive review of the base game. Now that Xbox Series X is around the corner why not read our recent hands-on impressions to get ready?

Are you excited to replay Gears 5 as Drax the Destroyer himself? Tell us what you think in the comments!