One year, four free content updates, and over three million players later, Risk of Rain 2 has expanded significantly since it first arrived.

New characters brought new ways to fight through the hordes of frenzied monsters standing between you and your escape from a chaotic alien planet. New loot added new mechanics, stacking with abilities to create powerful (and surprising) new combinations.

The best part, though? The best part is how that’s all been preparation for the fifth content update — the 1.0 Update — coming for free to all Risk of Rain 2 owners on Xbox One right now! And if you don’t already own Risk of Rain 2, a new low price makes now the perfect time to jump into the critically acclaimed title.

There’s a lot of new stuff to discover within the 1.0 Update — either on your own in single player, or with your friends in co-op. For example…

The Captain is a unique survivor that can control the battlefield with utility and damage — with help from the orbiting UES Safe Travels. He wields a shotgun-rifle combo that narrows the spread as it charges and can stun targets. The Captain can also use his high-ranking authority to request probes and beacons from orbit to either provide armor or a healing zone for them and their allies.

The Captain marks the tenth playable character, each with their own unique gameplay style and character challenges. In Risk of Rain 2, brand-new survivors like the Artificer and MUL-T debut alongside classic survivors such as the Engineer, Huntress, and–of course–the Commando.

A new stage brings your run to its final conclusion: The Moon! Can you survive the new Lunar monsters – and face off against the final boss?

Add a chance to fire magma balls on hit with Molten Perforator, or drain your opponent’s life bars into yours with Super Massive Leech – just two of the latest additions in the game’s arsenal of more than 110 items. New challenges and unlockable skill variants add new strategic potential, while new lore entries flesh out the universe of Risk of Rain 2.

From those of us at Hopoo Games and from the team at Gearbox Publishing, thank you for joining us on this journey. We’ve been thrilled to see your reactions as you’ve enjoyed the game, and we’re excited for what the future holds! See you on the planet. 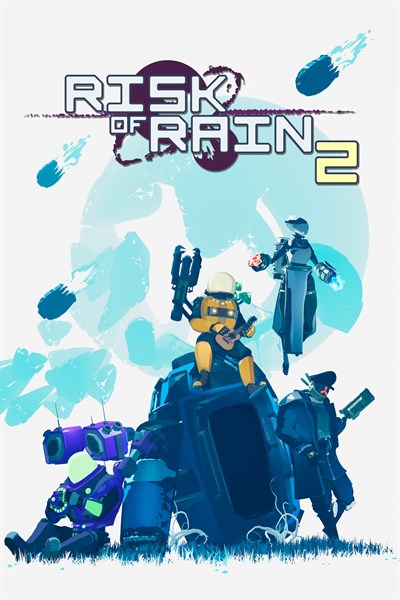 Escape a chaotic alien planet by fighting through hordes of frenzied monsters – with your friends, or on your own. Combine loot in surprising ways and master each character until you become the havoc you feared upon your first crash landing.

SURVIVE AN ALIEN PLANET
Over a dozen handcrafted locales await, each packed with challenging monsters and enormous bosses that oppose your continued existence. Fight your way to the final boss and escape or continue your run indefinitely to see just how long you can survive. A unique scaling system means both you and your foes limitlessly increase in power over the course of a game.

UNLOCK NEW WAYS TO PLAY
Unlock a crew of ten playable survivors, each with their own unique combat style and alternate skills to master. Learn the secrets of the Artifacts to toggle gameplay modifiers like friendly fire, random survivor spawns, item selection and more. With randomized stages, enemies, and items, no run will ever be the same.

PLAY SOLO OR CO-OP
Tackle the adventure solo or with up to three friends in online co-op, or compete in the rotating challenge of the Prismatic Trials. Brand new survivors like the Captain and MUL-T join classic survivors such as the Engineer, Huntress, and–of course–the Commando.