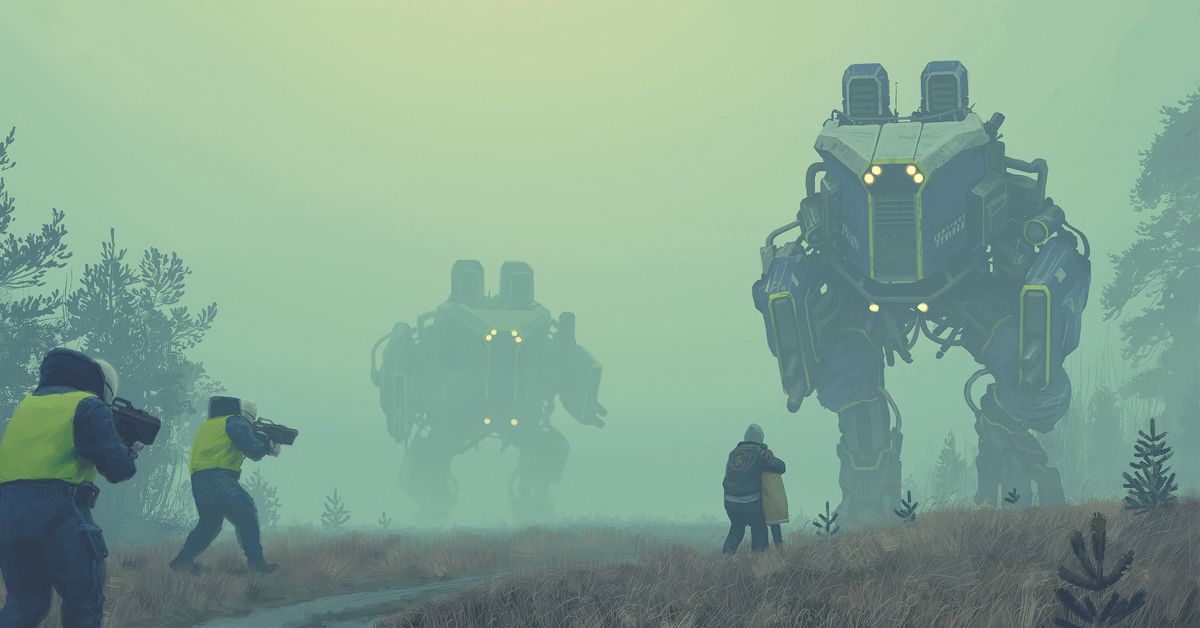 For an artist whose work has so far focused on alternate histories, Simon Stålenhag’s journey to notoriety has been a decidedly modern one. He credits our sister publication, The Verge, for bringing his art into the public eye way back in 2013. If you haven’t been part of the crowdfunding campaigns for his several art books, you may instead recognize his work from the Amazon Prime television series, Tales from the Loop.

Now Stålenhag is out with a new book project, titled The Labyrinth, which is also up for pre-order on Kickstarter. Polygon sat down to interview the musician, author, artist, and director to discuss that effort — and his next next book, working title Europa Mekano.

Tales from the Loop, Stålenhag’s first book, was a collection of vignettes featuring bizarre technologies set against rural Swedish landscapes. Accompanying each piece of art, plucked from an imagined version of the 1980s, was a bit of text that told a short story. That format continued in Things from the Flood, which is also based in Sweden.

With The Electric State, Stålenhag shifted his focus to America and, for the first time, attempted to create a complete and coherent narrative. The result was captivating story of survival, culminating in a fluid series of highly detailed storyboard-like sequences. The book earned him a nomination for the Arthur C. Clarke award in 2019.

With The Labyrinth, Stålenhag said he’s aiming to keep that linear format going. This time around, the setting and the subjects has changed dramatically.

“With Electric State it was like capturing the mid-’90s, consumer electronics, and all of like the X-Files aesthetic,” Stålenhag said. “It’s much more about that aesthetic that I’m into. And I turn it into a bit like steampunk. Steampunk is Victorian England, but you turn it into science fiction. So, for me, it was like the Bill Clinton-era and turning that into science fiction.”

“The same with Tales from the Loop,” he continued. “It was [taking] my childhood and turning that into science fiction, in terms of the science. Labyrinth is kind of different from that, in that it actually isn’t so much about aesthetics. It’s more about that kind of cosmic horror. So that’s why everything looks like they’re on the bottom of a deep sea trench, basically.”

In the world of The Labyrinth, the surface of the Earth has been covered with ash. Some of that is due to the destruction of the habitat itself by the human population, but most of it is the result of an invading force seeking the transform the planet to meet its own needs. In many frames you can see them — black orbs, leaking black goo into the air and over the land.

“We’re kind of being terraformed to some other kind of composition,” Stålenhag said. “Maybe one day they will come and colonize us, whoever they are. But the Earth is being changed radically. We cannot survive on the surface, and it’s going very rapidly as it has happened during that 15 years or so.”

Stålenhag said he was inspired by the sickening resurgence of populism following the 2016 U.S. presidential election. He likens it to a kind of cultural doomsday device.

“During the Cold War, Carl Sagan and people like that, they were like, ‘Okay, this might be why we don’t hear from the aliens — because they have exterminated themselves.’” Stålenhag said. “You have the power to destroy, and societies can’t survive past that technological limit. So they were kind of horrified by that, [with] the invention of that technology. I think also that populism has that quality. We see in humanity, this instinct to turn to fear and hate and the willingness to divide people. And, for me, that is a cosmic horror.”

All he could think about after 2016 was a world in ruins, which gives his landscapes a newfound sense of claustrophobia. In The Labyrinth, the environmental ruin of the planet is a fait accompli happening in the background. An entirely different, more active kind of destruction is active inside the faceless people in the frame. Stålenhag calls it “domestic horror.”

The Labyrinth has three main characters — Sigrid and Matt, who are siblings, and a young boy named Charlie. He says they are “a constellation of survivors.”

“Charlie is their kid in some way,” Stålenhag said. “They take care of him and, and, and when we meet them, he has just turned into a kind of troubled teenager. And he refuses to talk. […] That kind of causes all sorts of guilt to arise in Matt and Sigrid. Sigrid is retelling the story about what happened before they moved underground, and how they met Charlie, and what their relationship is. Because they’re all kind of refugees in a way.”

Stålenhag promises that Sigrid’s own recollections of the time before and during the alien invasion will help to focus the narrative.

“I wanted to create a character that had made those [populist] choices, that was separating people at the border, for instance,” he said. “Somebody makes that choice because they think it’s for the best and … I don’t think I mean, of course, there are evil people in the chain of command. But, most people who make it happen, they are not evil people. So somewhere they justify it. They justify it to themselves. And I and I wanted to get into the mind of somebody who had justified doing that the way I would have to do it.”

For his next project, Stålenhag says he’s heading in another direction entirely.

“It’s kind of a love story between two young men,” Stålenhag said. “It’s about how their masculinity is in the way of that. But, it’s also a story about this robot that has all these memories from a past life.”

The robot, he says, has a tiny shard of a human brain inside of it. An accident activates that shard in an unusual way, revealing the memories of its past life.

“In those memories is this love story,” he said. “So it’s kind of a cyberpunk-ish part to it. But it’s also a very romantic, sad, kind of love story.”

You can see early versions of the art that will become Europa Mekano at his website. Pre-orders for The Labyrinth extend until Oct. 30.