World Series Daily: Get ready for Clayton Kershaw vs. Tyler Glasnow in Game 1 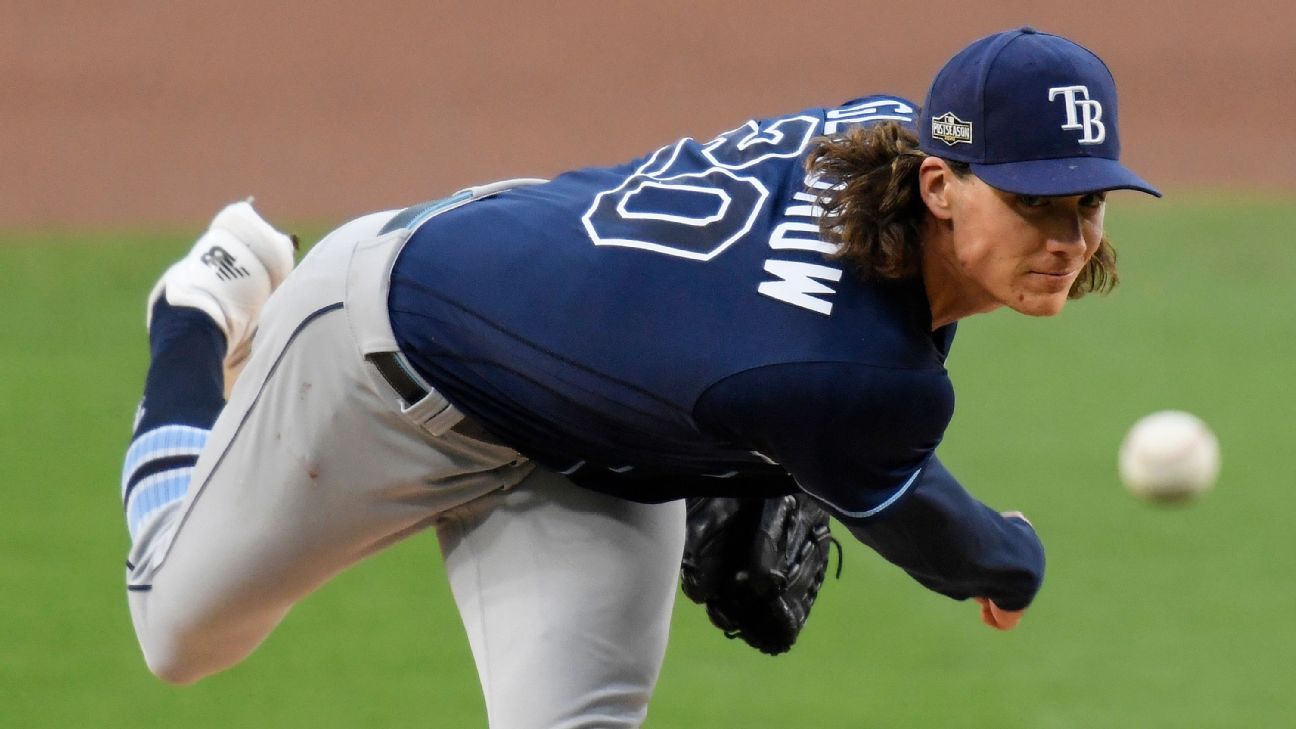 After all the oddities of the MLB regular season and postseason, the 2020 World Series pits baseball’s top two teams against each other, which is something that doesn’t happen every year. And while we’ve grown accustomed to seeing the Dodgers playing for the championship, this is the first Fall Classic for the Rays since 2008 and only the second in franchise history.

Here’s what you need to know for the World Series opener Tuesday night, including a look at the Game 1 pitching matchup, predictions, odds and other key numbers, and more.

For just the fourth time since the wild card was added in 1995, we get a World Series featuring the teams with the best record in each league. The others were Braves over Indians in 1995, Yankees over Braves in 1999 and Red Sox over Cardinals in 2013. For the third time in four years, we also get Kershaw starting Game 1. In 2017, he allowed one run with 11 strikeouts against the Astros, and in 2018, on a cold night in Boston, he allowed five runs. One thing that’s different this year: Kershaw isn’t the best player on his team; he might not even be the best pitcher. He just has to be a contributor.

“I think every year is different. Obviously, postseason you have that experience to draw on, so just trying to learn from that as best you can,” Kershaw said Monday. “But at the same time, every year is different, every team is different. The Rays are a different team than the Astros and the Red Sox. So I’m going to prepare like I always do and be as ready as I can be and excited about another opportunity to get it done.”

He doesn’t have to pitch great, but a solid effort of five or six innings would be a huge emotional lift — not just for him, but for the entire team. This isn’t the Kershaw of a few years ago, of course, but he did increase his fastball velocity this season, to 91.6 mph. Still, he continues to throw his fastball less often and his slider and curveball more often. In 2016, he threw his fastball 50% of the time; it was down to 41% this year.

It will be interesting to see how manager Dave Roberts deploys his Dodgers bullpen. The pen has a 3.40 ERA in the postseason, but that includes 11 innings with no earned runs from Julio Urias. Take him out and the ERA jumps to 4.23. Blake Treinen pitched in the final three games of the National League Championship Series, so even though he had an off day on Monday, he’s probably the reliever Roberts would like to avoid.

*If necessary
All games on Fox and ESPN Radio

For the Rays, hard-throwing Tyler Glasnow gets the start Tuesday. He’s basically a two-pitch guy with an upper-90s fastball and wipeout curve. Including the postseason, he has averaged 13.6 strikeouts per nine innings, so he can dominate when he’s locating the heater. He has had issues with the home run, however, allowing six in 19⅓ innings in the postseason. The Dodgers, of course, are very good at hitting home runs, leading the majors in the regular season and swatting 16 in the NLCS, tying the record for home runs in one series. Glasnow has allowed a much higher slugging percentage to right-handed batters (.497) than lefties (.328).

Rays manager Kevin Cash was fairly careful in not overextending his top relievers in the American League Championship Series, but with the traditional two off days back on the schedule, he will probably be short term in his thinking and go pedal to the metal with Nick Anderson, Diego Castillo and Peter Fairbanks.

Ultimately, the Rays will need somebody beside Randy Arozarena and Manuel Margot to step up. Willy Adames (.132 in the postseason) and Brandon Lowe (.115) combined for 22 home runs in the regular season, but have just one in 90 at-bats in the playoffs. They need more from those two, especially if Arozarena doesn’t stay on his incredible hot streak. — David Schoenfield

David Schoenfield: Kershaw goes six solid innings, taking advantage of the strikeout-prone Rays to rack up 10 K’s. The Dodgers hit a couple of home runs off Glasnow, then tack on a couple more runs against the second tier of the Tampa Bay relievers. Dodgers 5, Rays 1.

Jesse Rogers: Game 1 is where Kershaw (finally?) shines in the postseason. That could be for a shorter-than-desired outing if his back starts acting up, but all signs point to him being healthy. Or at least healthy enough to mow down the Rays. And remember, Tampa Bay was just a .500 team in the regular season against left-handed starters. Kershaw has had a whole postseason of games to watch Arozarena on video, so he won’t let the rookie beat him, and the Rays — at least against lefties — aren’t deep enough. At least on paper. Whatever advantage Tampa Bay had with an extra day off is mitigated by having to fly across two time zones and play in a new ballpark for the first time. Glasnow says it’s not the mound he’ll have to get used to but perhaps the sight line to the catcher or behind him. It probably won’t be a big deal, but the slightest edge can make the difference. L.A. wins a low-scoring game. Dodgers 3, Rays 1.

Alden Gonzalez: The Dodgers are still on a high from their intense Game 7 on Sunday night, their third consecutive win to eliminate Atlanta in the NLCS, and the guess here is that they’ll ride that momentum to a strong offensive showing in Game 1. Kershaw gets a lot of flak for his postseason shortcomings, but for one night, at least, he’ll pitch deep into the game and give a tired bullpen a needed break. Dodgers 7, Rays 2.

Based on their LCS rosters, the Dodgers come into the World Series with 700 games of playoff experience compared to just 284 for the Rays. According to research by the Elias Sports Bureau, that 416-game difference is the largest disparity between World Series opponents since the Yankees and Marlins had a 418-game gap in 2003. The 2001 Yankees’ 546-game difference against the Diamondbacks is the greatest.

The #WorldSeries AKA the battle for the 2020 City of Champions. pic.twitter.com/YNJlYILpwU

Cody Bellinger managed to one-up … Cody Bellinger. The Dodgers outfielder has held this crown since he robbed Fernando Tatis Jr. of a home run in a thrilling Padres-Dodgers NL Division Series Game 2, but his NLCS-deciding Game 7 home run to put Los Angeles in the 2020 World Series was just enough to take over the top spot.

Randy Arozarena has gone from an unknown outfielder to this October’s breakout star. Going into the playoffs, you might have been asking, “Who is this guy?” But the Rays’ trade for him has been a huge factor in their postseason run. And while his MLB-high seven long balls have made a big impression, Arozarena also leads all hitters in the postseason with 47 total bases (and is leading in hits and runs). Also, he has been flashing some leather in the outfield and some sweet celebration dance moves on the field.