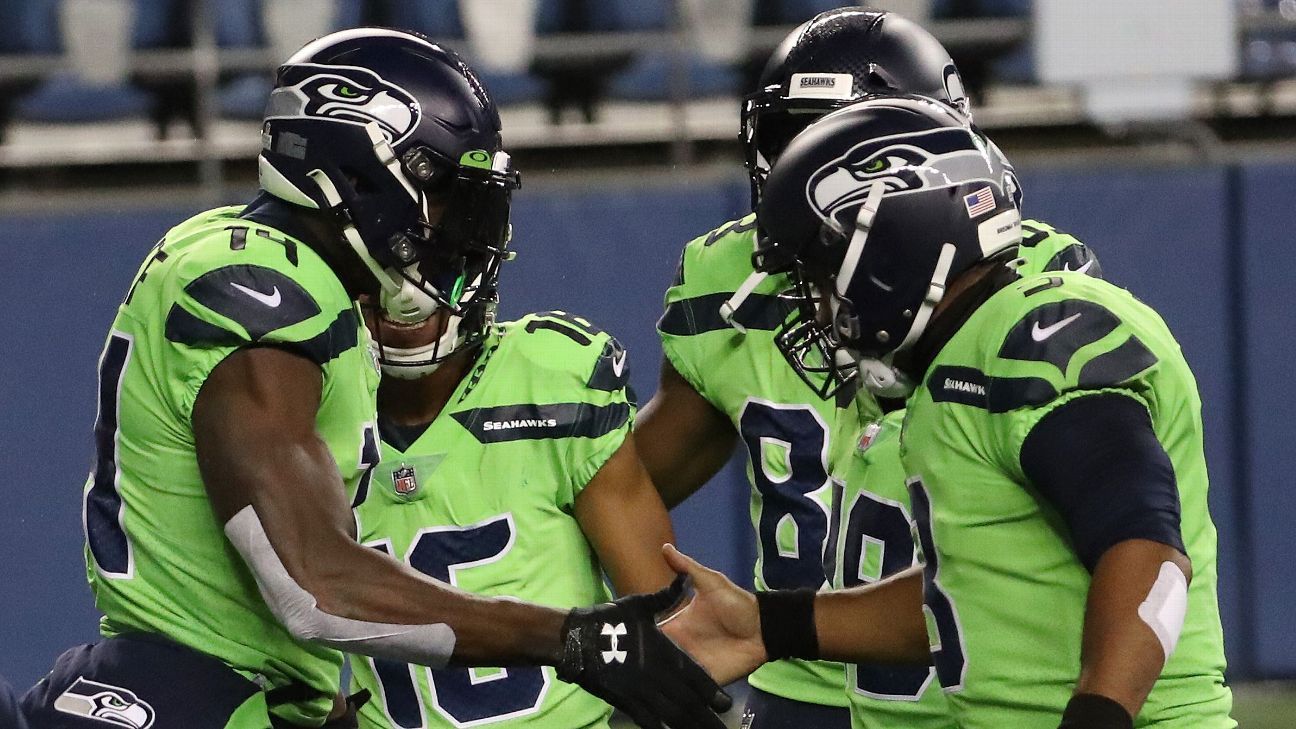 SEATTLE — Russell Wilson entered Sunday night’s game with 33 career game-winning drives in the fourth quarter or overtime, the most of any quarterback since Wilson entered the league in 2012.

Wilson took the Seattle Seahawks 94 yards in less than two minutes, unfazed by the rain that drenched CenturyLink Field all night or the two fourth-down plays he faced against the Minnesota Vikings’ defense. Wilson and DK Metcalf kept the final drive alive by connecting on fourth-and-10, then capped it off when Wilson found Metcalf in the end zone for a 6-yard touchdown with 20 seconds left.

That gave the Seahawks a 27-26 win and the first 5-0 start in franchise history.

“There is just so much character that goes into being able to have that much poise, to be that clear, to function like that so beautifully throughout those opportunities,” coach Pete Carroll said of Wilson. “He’s just as good as you can get. I don’t know how anybody could ever be better than what he continues to show us in those situations. He’s as good as you can get.”

Wilson threw another touchdown pass to Metcalf earlier in the game and three total Sunday, giving him 19 on the season. That’s one shy of Peyton Manning’s record for the most through a team’s first five games in NFL history. Wilson, the early-season MVP front-runner, set the record through three games (14) and tied Manning’s record through four games (16).

As hot as Wilson and the Seahawks’ offense were heading into Sunday, they came crashing back to earth early against Minnesota (1-4). Wilson was 7-of-7 in the first half but managed only 40 yards through the air and lost 27 yards via four sacks. His 35 rushing yards accounted for more than half of Seattle’s 66 total yards en route to a 13-0 halftime deficit. That marked only the sixth time in Wilson’s career that the Seahawks were held scoreless in a first half.

They rallied back in the third quarter, scoring 21 points in 1 minute, 53 seconds, thanks in part to takeaways on consecutive Minnesota possessions. Defensive end Damontre’ Moore got the first one with a strip-sack of Kirk Cousins that linebacker K.J. Wright recovered. Wright then made a leaping, one-handed interception, hanging on to the ball after dropping three would-be picks last week.

The first of Seattle’s three straight third-quarter touchdowns was a 19-yard pass from Wilson to tight end Will Dissly, who got his first score of the season almost exactly a year after he tore his Achilles tendon in an Oct. 13, 2019, game at Cleveland. The next two came on a 13-yard slant pass to Metcalf and a bulldozing, 29-yard run by Chris Carson.

Wilson finished 20-of-32 for 217 yards, three touchdowns and an interception. According to research by the Elias Sports Bureau, he is 28-7-1 in his career in night games (defined as 5 p.m. or later local time) for a .792 winning percentage, the best by any quarterback with 10 or more such starts since the 1970 merger.

Cousins finished 27-of-39 for 249 yards, two touchdowns and one interception.

Their defense, again playing without All-Pro safety Jamal Adams, had more problems. After getting gashed through the air earlier in the season, Seattle gave up 201 yards on the ground to Minnesota, even with Dalvin Cook — the league’s leading rusher through four games — missing much of the second half because of a groin injury.

The Seahawks have given up 2,356 total yards this season. According to Elias, that’s the most by any team through five games since the 1950 Colts (2,390). But that same group that saved wins over the New England Patriots and Dallas Cowboys in consecutive weeks came up with another big play late against Minnesota.

Ahead 26-21 at the two-minute warning, Vikings coach Mike Zimmer kept his offense on the field for a fourth-and-1 play from Seattle’s 6-yard line instead of kicking a chip-shot field goal. Seattle stopped Cook’s replacement, Alexander Mattison, for no gain to put the game in Wilson’s hands.

He started his game-winning drive with a 17-yard scramble, then missed on three straight throws, setting up the fourth-and-10 play that Metcalf converted with a 39-yard catch down the sideline. Metcalf had another reception for 15 yards on that drive, then had the would-be game winner knocked out of his hands by cornerback Mike Hughes. He hung on when Wilson found him two plays later.

According to Elias, it was the third-longest go-ahead touchdown drive that began in the final two minutes of a game over the past 40 seasons. The two that were longer were led by Jameis Winston in 2017 (95 yards) and Brian Griese in 2007 (97 yards).

“With the quarterback we have, there’s no doubt in our minds that we’re … going to go down here and score,” Metcalf said. “Any time we’re in that moment, it’s easy for us to just go out there and play our football because we know we’ve got a quarterback that can make anything possible. Anything can happen. He can deliver when the game is on the line.”

Metcalf led Seattle with six catches (on 11 targets) for 93 yards. He has five touchdown catches on the season.

“DK did a great job of running away from his guy, closing off the window,” Wilson said of the winning TD. “All those reps that we’ve practiced in the offseason, in the summer, all the time just together one-on-one, it really showed up tonight, for sure, in that special moment.”

Games that come down to the wire are nothing new for the Seahawks. They beat the New England Patriots and Dallas Cowboys in similar fashion in Weeks 2 and 3.

According to ESPN Stats & Information research, this was the 14th win by the Seahawks in a one-possession game since the start of last season. They’re 14-2 in such games. No other team has more than 10 wins in one-possession games in that span.