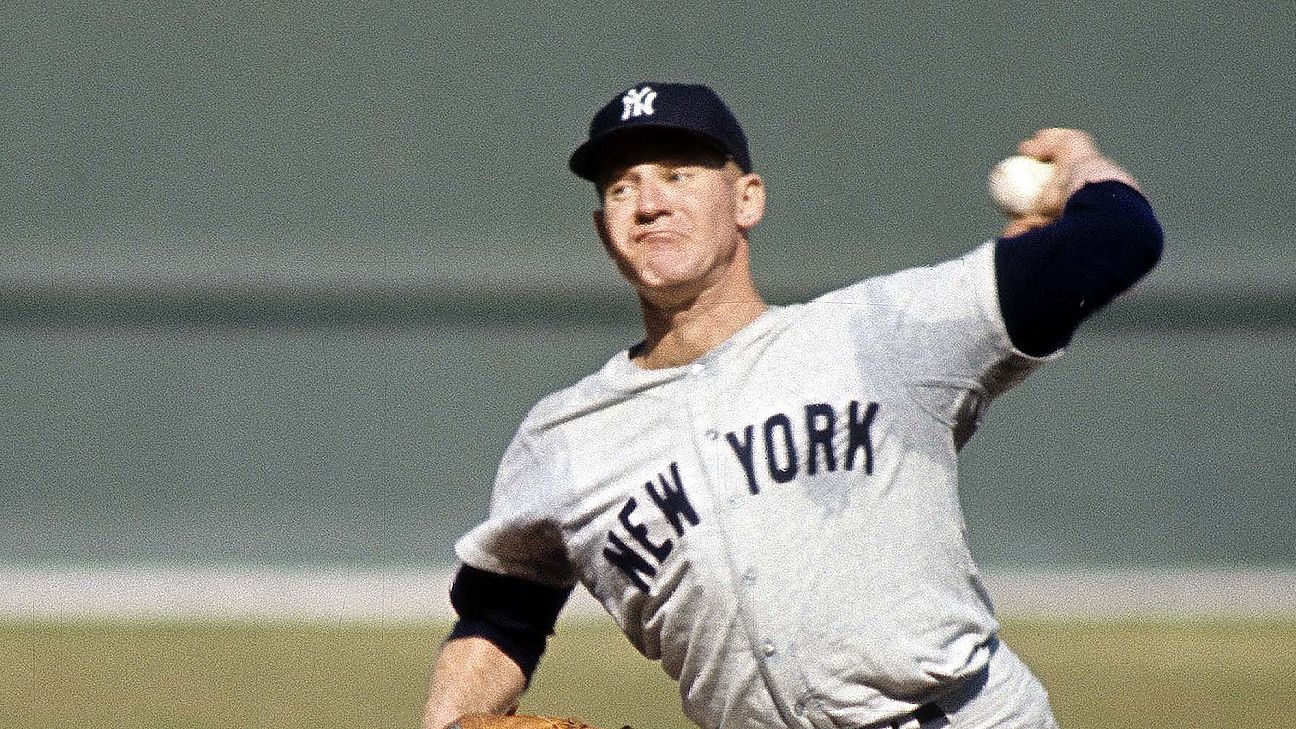 Whitey Ford, a Hall of Famer for the New York Yankees who won more World Series games than any other pitcher, died at the age of 91, the Yankees announced Friday.

A family member told The Associated Press on Friday that Ford died at his Long Island home Thursday night. The cause was not known.

Edward Charles “Whitey” Ford was born on Oct 21, 1928, and grew up in Queens. He made his major league debut for the Yankees in 1950 and spent his entire career with the Bronx Bombers.

In the 1950s, when Pulitzer Prize-winning sports columnist Jim Murray wrote that rooting for the Yankees was like rooting for General Motors or U.S. Steel, there was one man who was “Chairman of the Board.”

The Yankees are incredibly saddened to learn of the passing of Hall of Famer Whitey Ford. Whitey spent his entire 16-year career as a Yankee. A 6x WS Champion and 10x All-Star, The Chairman of the Board was one of the best lefties to ever toe the rubber. He will be deeply missed. pic.twitter.com/2KDi4V9SeA

“Whitey’s name and accomplishments are forever stitched into the fabric of baseball’s rich history,” Yankees owner Hal Steinbrenner said in a statement. “He was a treasure, and one of the greatest of Yankees to ever wear the pinstripes. Beyond the accolades that earned him his rightful spot within the wall of the Hall of Fame, in so many ways he encapsulated the spirit of the Yankees teams he played for and represented for nearly two decades.”

Ford helped the Yankees win six World Series titles and 11 American League pennants in his 16 seasons. Ford had a career record of 236-106, setting the Yankees’ record for victories. His career winning percentage of .690 is the best for any pitcher with at least 300 career decisions. Ford was the Cy Young Award winner in 1961, when he was 25-4, and was a 10-time All-Star.

“Today all of Major League Baseball mourns the loss of Whitey Ford, a New York City native who became a legend for his hometown team. Whitey earned his status as the ace of some of the most memorable teams in our sport’s rich history. Beyond the Chairman of the Board’s excellence on the mound, he was a distinguished ambassador for our National Pastime throughout his life. I extend my deepest condolences to Whitey’s family, his friends and admirers throughout our game, and all fans of the Yankees,” commissioner Rob Manfred said in a statement.

Ford’s status as the best pitcher on the best team was exemplified by his marks in the World Series, where he was chosen as a Game 1 starter eight times. His 10 World Series victories are the most for any pitcher, and he pitched 33⅔ consecutive scoreless innings in World Series play, breaking a record set by Babe Ruth. He also still holds records for World Series starts (22), innings pitched (146) and strikeouts (94).

Ford’s best seasons came in 1961 and 1963, in the midst of a stretch of five straight AL pennants for the Yankees, when manager Ralph Houk began using a four-man rotation instead of five. Ford led the league in victories with 25 in 1961, won the Cy Young Award and was the World Series MVP after winning two more games against Cincinnati. In 1963, he went 24-7, again leading the league in wins. Eight of his victories that season came in June. He also led the AL in earned run average in 1956 (2.47) and 1958 (2.01).

Ford and Mickey Mantle were the icons for their edition of the Yankees dynasty and, fittingly, they went into the Hall of Fame together in 1974. Ford’s No. 16 was retired by the Yankees that year.

Ford often called his Hall of Fame election the highlight of his career, made more meaningful because he was inducted with Mantle, who died in 1995.

“It never was anything I imagined was possible or anything I dared dream about when I was a kid growing up on the sidewalks of New York,” he wrote in his autobiography. “I never really thought I would make it as a kid because I always was too small.”

Ford’s death is the latest of a number of baseball greats in 2020. Al Kaline, Tom Seaver, Lou Brock and Bob Gibson also died this year.