Where did Rays rookie Randy Arozarena, ‘best player on earth,’ come from? 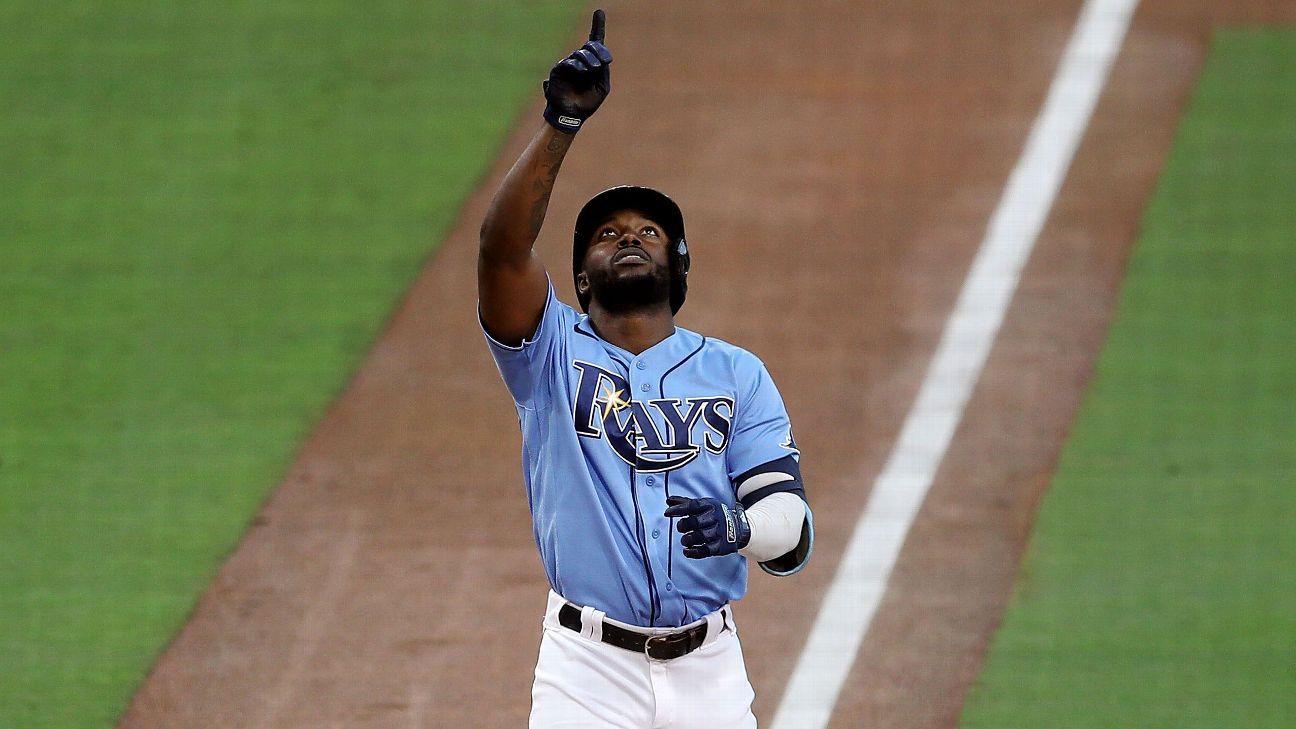 SAN DIEGO — It was a year ago that Randy Arozarena made news for all the wrong reasons. It was Arozarena who live-streamed Cardinals manager Mike Shildt’s profanity-laced postgame talk after St. Louis eliminated the Braves in the National League Division Series. It went viral, and Arozarena was ashamed.

Fast-forward to the present, and Arozarena is making MLB news this October with his bat instead of his phone. After a torrid stretch in which Arozarena was 12-for-20 in the Tampa Bay Rays’ first five postseason games — including home runs in each of the first three games against the Yankees in the ALDS — teammate Tyler Glasnow proclaimed him “the best player on earth” last week.

It’s difficult to argue that point after Arozarena again came through in Game 1 of the ALCS against the Houston Astros, blasting a laser-like solo shot to straightaway center field in the fourth inning to erase a one-run deficit. The Rays went on to win the opening game 2-1.

“I think everyone is just in awe when he steps into the box,” catcher Mike Zunino said. “The power surge really ignites our offense. The sky’s the limit with him. It’s truly amazing what he can do against the best arms in the game.”

Rays manager Kevin Cash knows a good thing when he sees one, and that’s why Arozarena has been in a key spot in the lineup since he was activated in early August after returning from the COVID-19 list.

“I don’t know if I can,” manager Kevin Cash said when asked after Sunday’s victory to describe what Arozarena is doing this postseason. “I don’t know if I want to get in the way right now. He doesn’t have any familiarity, doesn’t know these guys he’s facing. He’s timed up. For a guy who swings as aggressively as he does, Randy’s just been as bright as any spot or as any player in the postseason.”

Like so many on this Rays roster, Arozarena fits in perfectly as someone who came from another organization that believed it would be better off without him. His is a story not uncommon to many of the Cuban-born players now in Major League Baseball. It’s a tale that includes a covert and incredibly dangerous journey and the desire to play baseball at the highest level possible. Arozarena has said that he escaped Cuba under the cover of night on a boat, heading across the 120 or so miles from the westernmost point in Cuba to Mexico’s Yucatan peninsula.

Leonys Martin, 32, is from an earlier era than Arozarena, 25, and the two have much in common, though they have never met. Martin made almost the exact same journey five years earlier in 2010. He wound up playing nine seasons in the majors and has been playing in Japan the past two seasons. He knows firsthand the terrifying anxiety associated with the path Arozarena took.

“Knowing I have made $40 million in my career, if you put me in the same situation, I would of course leave Cuba again, but I would never again put myself in a nightmare situation like that again in my life,” Martin said from Japan, where he plays for Chiba Lotte. “The worst decision a human could ever make is to put their life in danger simply to realize their dream. From the time you start planning until the time you are comfortable in the United States and playing baseball, there are so many things that can happen, from losing your life to losing everything you have worked so hard to attain.

“If they catch you in Cuba, you are ruined, and you will never be anything ever again. You can die so easily on open seas. You can be killed once you arrive in Mexico or be kidnapped. And you really have no idea what you’re getting yourself into. Knowing everything I know now, I would never leave Cuba again in the manner I did. No chance.”

Sadly, that is the way many of the Cubans currently in American professional baseball arrived. The two countries have no formal relations. It was in Mexico that Arozarena established residency and began playing pro ball in the Mexican League.

From there, the St. Louis Cardinals scouted him and signed him for $1.25 million. He has hit at every level he has played, even flexing some power numbers. But that was nothing like what he has done since the calendar flipped to September this year. His 11 home runs since Sept. 1 are second only to Adam Duvall’s 12. His first game for Tampa Bay this season was more than a month after the season began in late July because he contracted COVID-19.

The MLB postseason is down to the final four. Here’s how they rank, each team’s strengths and weaknesses, and what they need to do to win it all. Power Rankings

As an aside, Arozarena wore No. 66 for his team in Tijuana because of his admiration for fellow Cuban Yasiel Puig, and he did so again last season in St. Louis. Upon arriving in Tampa Bay, Arozarena was given No. 56 after he was traded along with Jose Martinez in January, a deal that sent highly regarded pitching prospect Matthew Liberatore and another minor leaguer to the Cardinals. The Rays, an organization that always thinks pitching first, liked Arozarena so much that they dealt one of their top minor league arms.

Unlike Puig, Arozarena was mostly a silent player inside the clubhouse, shying away from most any interview requests while with the Cardinals last year. He has been on a couple of postseason zoom calls with reporters this month and is starting to show more of his personality, joining teammates in a celebratory dance-off on the field on Friday at Petco Park after the Rays sealed their five-game series victory over the Yankees.

Anyone who shines brightest under the intense lights of October could very well be MLB’s next Cuban star in the making.