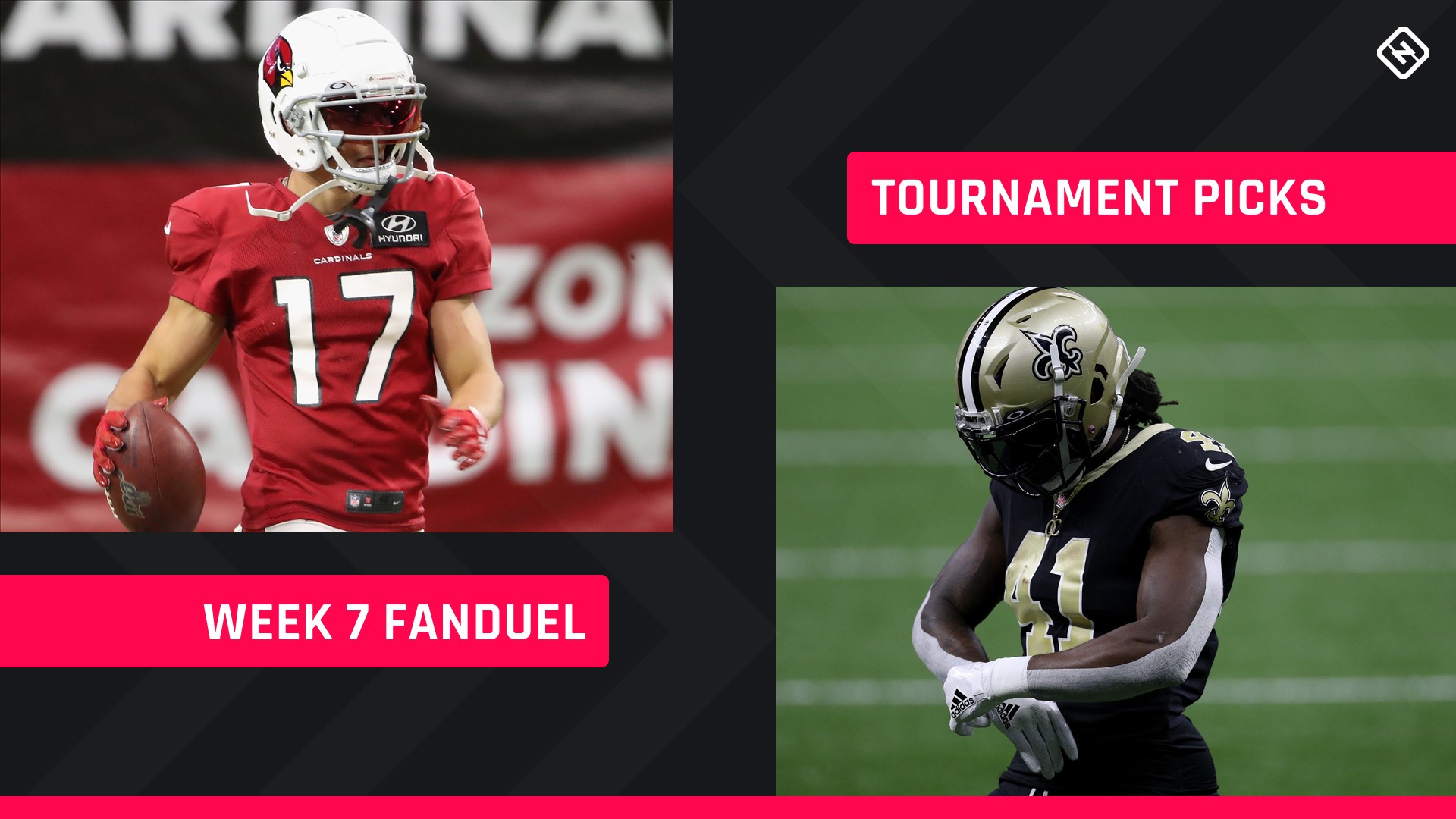 Our Week 7 FanDuel tournament lineup goes with the studs-and-scrubs approach to try and win a GPP contest. We’ve managed to jam Kyler Murray, DeAndre Hopkins, Derrick Henry and Alvin Kamara all into the same lineup in the hopes that a few huge days can combine with our value plays to approach the top of a NFL DFS leaderboard.

The big trio that needs to hit for this lineup to perform is Murray, Hopkins and Andy Isabella. The Cardinals should be in a shootout with the Seahawks, and we’ve chosen the Arizona stack over the Seattle stack in the hopes that Murray’s rushing makes the difference.

Murray completed nine passes in Week 6 and still had 28.9 FD points. That’s how explosive he is. An 80-yard passing TD and 74 rushing yards with a score add up into points in a hurry, and the Cardinals won’t be in a blowout this week. Murray’s numbers could be massive in a likely shootout.

Coming off a bye, the Saints should be fresh, healthy and ready to assert their divisional dominance over a surprisingly solid Panthers team. Kamara will remain at the center of it all as one of the highest-ceiling players on the slate and someone that you shouldn’t fade if you can help it.

Kamara and Henry? Yeah, we’re taking some risks further down, but it’s the type of approach you’ve got to take to win a tournament. Henry looks like he’s hitting his stride again as one of football’s most dominant players, and even a solid Steelers defense won’t be able to slow him down.

Hopkins was the biggest loser from Murray’s limited passing game in Week 6. They seemed to be off the same page on a couple of early, errant throws, and it didn’t really right itself. Expect things to get better in a hurry in a game Murray will need his top receiver to keep up with Russell Wilson.

Isabella got behind the Dallas defense twice in Week 6, and twice Murray and he couldn’t quite connect. One of the fastest players in football, Isabella is a worthwhile stab to try and hit a home run with this week.

The Bills don’t often have Tre’Davious White shadow players, so don’t be too concerned about that. Perriman had eight targets in his first game back from an ankle injury and could see a similar number as the Jets try to keep up with Buffalo. He also brings the deep speed in the Jets’ offense, which is something worth betting on at this low price.

Washington has allowed the fifth-most FD points to tight ends this season, and after seeing how much Andy Dalton looks likely to trust his intermediate pass-catchers, Schultz could see six-to-10 targets. If Dallas can actually get into the red zone, Schultz could score a touchdown, too.

Beasley keeps being one of the more unlikely red-zone studs in football, catching another touchdown in Week 6. The Jets aren’t going to be stopping anyone on this Buffalo offense, and Josh Allen has continued to trust Beasley when his accuracy is otherwise waning. So, while Beasley seems low upside, he has a good chance of delivering.

Gardner Minshew is slumping a bit, and the Chargers have one of the league’s more talented defensive units. We’re going to bet on some Minshews turnovers making this pick click.