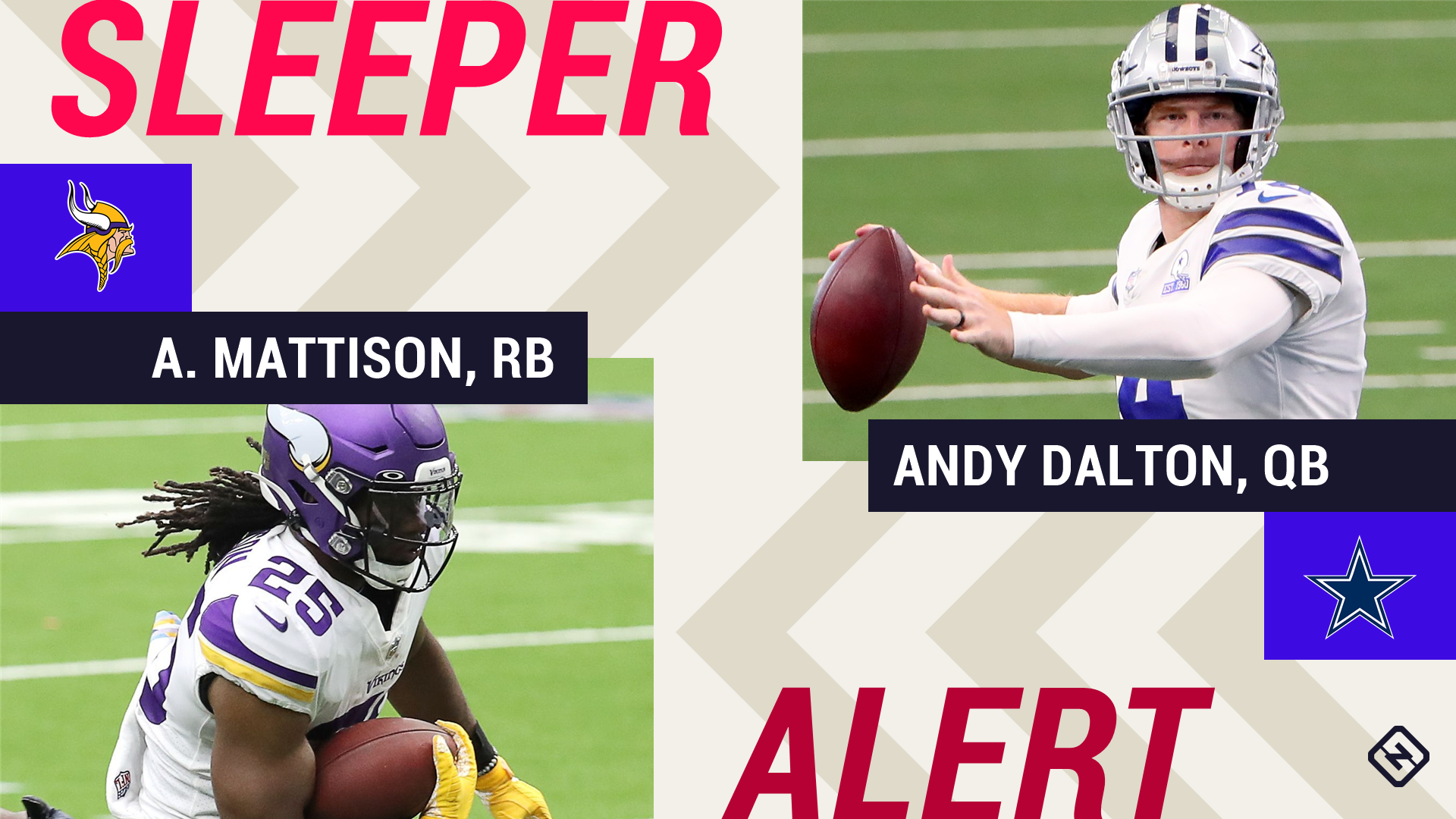 As the fantasy football season rolls on into Week 6, we have our first (official) four-team bye of the 2020 season. The cancellation of the Broncos-Patriots game made four teams take off last week, but this week, the Raiders, Seahawks, Saints, and Chargers, will all be off.

That will create some tough start ’em, sit ’em decisions for fantasy football owners that have some of the stud players from those teams. Luckily, there are always sleepers and streamers, like injury fill-ins Andy Dalton and Alexander Mattison, available for owners to target, and Week 6 is no different.

This week, Mattison is the most obvious sleeper. With Dalvin Cook (groin) hurt, Mattison should step into the lead-back role in a great matchup.

Elsewhere, Lions like Matthew Stafford and D’Andre Swift have a good matchup to exploit (@ Jaguars) while some speedy receivers (Mecole Hardman and Christian Kirk) should work their way into flex territory and could replace the likes of DK Metcalf, Keenan Allen, Michael Thomas, and Tyler Lockett.

Our sleepers were solid once again last week. Chase Edmonds, our top RB recommendation, scored on a 29-yard TD and totaled 56 yards through the air. Quarterbacks Kirk Cousins and Teddy Bridgewater each had solid games with two passing TDs each.

Even Darren Fells caught a TD. Defensively, the Browns (vs. Colts) and Cardinals (@ Jets) ended up being good calls, as the Browns forced Philip Rivers into turnovers while the Cardinals limited the Jets to just 10 points.

The only position that was a little bit troublesome last week was receiver. N’Keal Harry’s game was canceled, but Curtis Samuel and Deebo Samuel weren’t able to do quite enough to carry that position. We’ll try to do a bit better there this week with many critical receiving weapons now on bye.

Alexander Mattison, Vikings vs. Falcons (Jacob Camenker). It sounds like Dalvin Cook (groin) is going to miss the Vikings’ game against the Falcons in Week 6. If he does, Mattison will have a legitimate chance to be an RB1 in his place.

Mattison had 136 scrimmage yards on 23 touches against the Seahawks and took over the game after Cook exited with the injury. He should feast once again against an Atlanta defense that has allowed 20.7 fantasy points per game (FPPG) to RBs this season.

Chase Edmonds, Cardinals at Cowboys (Vinnie Iyer). He’s been paying off with his scoring and receiving much to the chagrin of Kenyan Drake owners, and game script says he should be busy in Dallas on Monday night

D’Andre Swift, Lions @ Jaguars (Matt Lutovsky). Swift has been on the field as much as any Lions RB if you take away his surprising no-show in Week 3. We expect him to gradually start getting more carries, but either way, he’ll remain Detroit’s top receiving back.

Against Jacksonville, who have struggled against pass-catching backs all year (average of seven receptions, 50.3 receiving yards/game to RBs), Swift has flex upside, especially in PPR leagues.

Matthew Stafford, Lions @ Jaguars (Camenker). Stafford has logged at least two passing TDs in three consecutive games, and he is averaging 254 passing yards per game so far this season. The Jaguars allow the fourth-most FPPG to QBs this season at a mark of 22.1. Stafford is one of the best streamers on the market this week, so feel free to trust him in this spot.

Kirk Cousins, Vikings vs. Falcons (Iyer). Cousins is mostly getting it done, and the Falcons really cannot cover any of his key receivers. Expect a big-play day playing off the run.

Andy Dalton, Cowboys vs. Cardinals (Lutovsky). Dalton looked good in relief of Dak Prescott last week, and this week he’ll face a Cardinals team that allowed at least 259 yards and two TDs to similar QBs Jimmy Garoppolo, Matthew Stafford, and Teddy Bridgewater. The only difference is Dalton has even better weapons around him than those three.

Mecole Hardman, Chiefs @ Bills (Camenker). With Sammy Watkins (hamstring) expected to miss a couple of weeks, there is now an opening at the No. 2 receiver spot for the Chiefs. Tyreek Hill and Travis Kelce will still be the top targets for the team, but Hardman could end up being a solid WR3 with Watkins out.

Hardman is a deep threat and has logged 10 catches for 158 yards and two TDs in his past three games. He can be trusted against a Bills defense that is dealing with injuries at cornerback including Tre’Davious White (back) and Levi Wallace (ankle).

Laviska Shenault Jr., Jaguars at Lions (Iyer). The dynamic rookie is coming on for Gardner Minshew and may need to see a larger role along with Keelan Cole in a smash matchup with DJ Chark (ankle) hurting.

Christian Kirk, Cardinals @ Cowboys (Lutovsky). Kirk has gotten going in recent weeks, catching a touchdown in Week 4 and recording season highs in catches (5), targets (7), and yards (78) in Week 5. Even after holding Giants receivers out of the end zone last week, Dallas remains one of the most fantasy-friendly defenses for WRs, so Kirk is in a good spot here.

Trey Burton, Colts vs. Bengals (Camenker). First, it was Jack Doyle. Then, it was Mo Alie-Cox. Now, it seems that Trey Burton has emerged as Philip Rivers’ favorite TE target for the Colts.

Burton has 11 targets over his first two games of the season and is taking on a Bengals defense that has allowed the seventh-most receiving yards to TEs so far this year (317). He’s a guy to look for as a streamer, especially in PPR formats.

Eric Ebron, Steelers vs. Browns (Iyer). The beat goes on for the first-year Steeler, as the Browns have had all kinds of trouble covering big athletic dudes like him.

Irv Smith Jr., Vikings vs. Falcons (Lutovsky). Smith finally looked like he was living up to his preseason hype last week when he caught four-of-five targets for 64 yards. In an even more favorable matchup this week, he could finally dent the end zone. Atlanta has allowed seven TE touchdowns already this year.

Carolina Panthers vs. Bears (Camenker). During their three-game winning streak, the Panthers have quietly allowed just 17.7 points per game. This included the Chargers’ offense led by Justin Herbert and Matt Ryan’s Falcons crew. The Panthers shouldn’t have trouble slowing down the Nick Foles-led attack of the Bears, as the team is only averaging 21 points per game this season.

Miami Dolphins vs. Jets (Iyer). The Dolphins’ defense is starting to get after it, and New York has been easy green for D/ST scoring.

Washington Football Team @ Giants (Lutovsky). Daniel Jones is a turnover machine, as shown by his eight giveaways already this season. Washington averages three sacks per game and should be able to pressure Jones into a few mistakes while keeping the score relatively low.