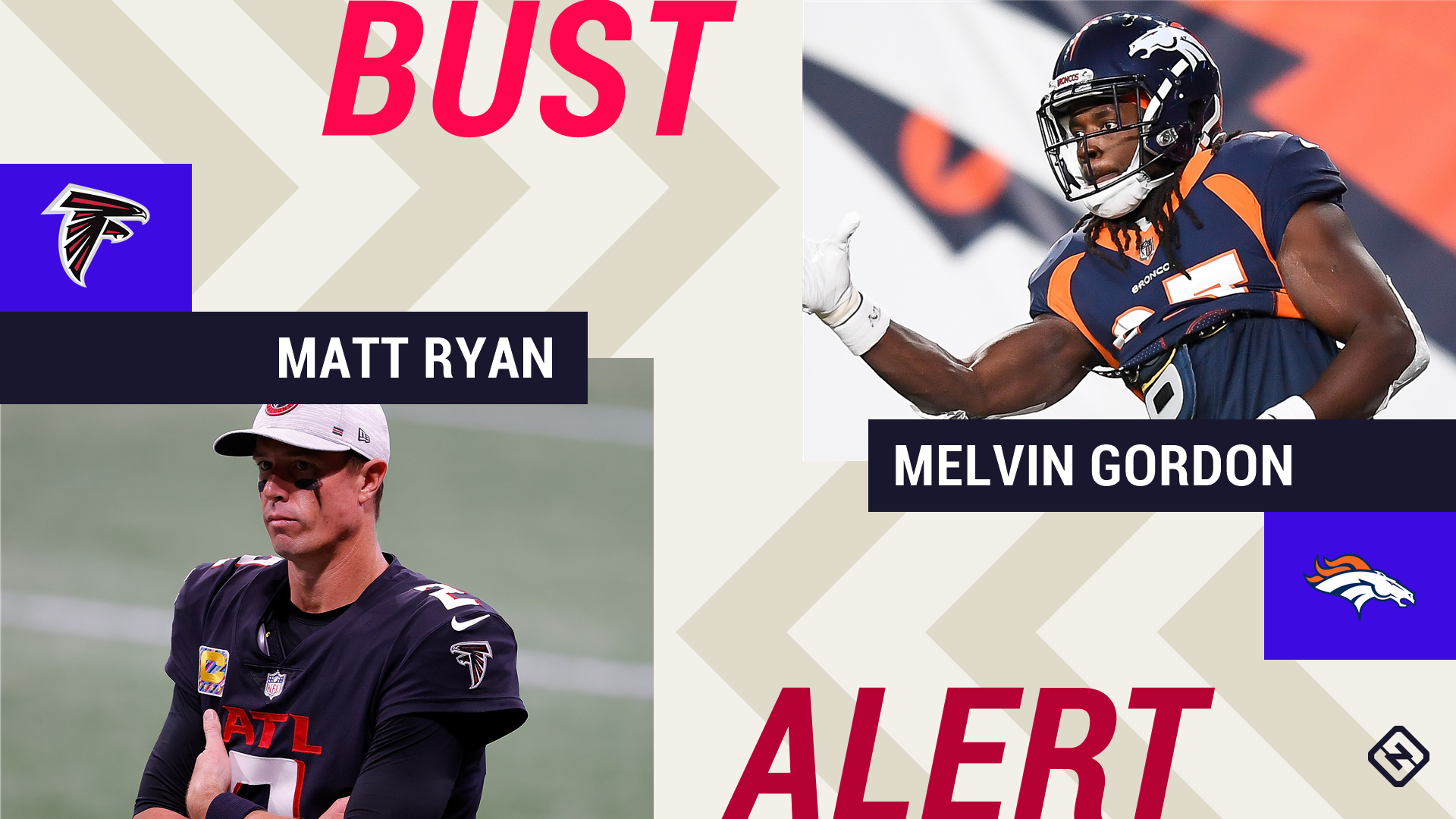 Melvin Gordon is coming off his best game of the season, but after a surprise bye, he now has to contend with a tough matchup (@ Patriots), the return of Phillip Lindsay, and a DUI charge that might see him face discipline from his team. It’s no surprise we have Gordon prominently featured in our Week 6 fantasy bust picks (assuming he plays, of course). Joining Gordon on the list are fantasy mainstays Matt Ryan, Devonta Freeman, D.J. Moore, Zach Ertz, and Tyler Higbee, among others, as all have unfavorable matchups or are trending in the wrong direction in terms of workload.

As always, our bust predictions are just educated guesses based on tough matchups, lacking opportunities, and injury issues. If you don’t have a comparable replacement for a potential bust, feel free to start them. Even if you have a gut feeling that someone will pan out, you can follow that. Just note that their ceilings may be lower then you expect because of the previously acknowledged factors.

Our busts last week didn’t pan out so well, as the likes of Justin Jackson, Jarvis Landry, Mike Gesicki, and even the Cowboys D/ST went on to have good games. That said, we were mostly spot-on at QB last week, as Matt Ryan and Joe Burrow both had dud performances without a TD. We’ll try to improve in the other areas moving forward, but at least the quarterback position was a strength in a down week.

Devonta Freeman, Giants vs. Washington (Jacob Camenker). Washington has been hit or miss against RBs so far this year, but this spot seems like a difficult one for Freeman. Washington does have a strong defensive line and is only allowing 4.03 yards per carry this season. Its only poor performances against the run have come against Nick Chubb and the three-headed committee of the Rams in a rainstorm blowout last Sunday. Freeman is a solid back, but given that he is averaging just 3.1 yards per carry, it might be difficult for him to find room to run this week, especially with his offensive line struggling.

Darrell Henderson, Rams at 49ers (Vinnie Iyer). He’s been hot, but now Cam Akers and Malcolm Brown are back in the mix taking away key touches. It’s easier to exploit a depleted San Francisco defense through the air. anyway

Melvin Gordon, Broncos @ Patriots (Matt Lutovsky). We picked Gordon as our RB bust last week before the game was canceled, and it makes even more sense to pick him as a bust this week. Gordon is facing a Patriots defense allowing the sixth-fewest fantasy points per game (FPPG) to RBs, and he’ll likely have to split carries with a healthy Phillip Lindsay (toe). Gordon is averaging just 4.3 yards per carry and fewer than three receptions per game, and he won’t see an uptick in production with Lindsay back. Assuming Gordon plays after getting charged with a DUI on Tuesday night, you might be forced to use him at flex given how thinned out the rankings are, but he shouldn’t be considered a “must-start.” Gordon likely won’t face league discipline for his DUI charge for a while, but he could face a team suspension, so watch for updates.

Matt Ryan, Falcons @ Vikings (Camenker). As strange as this sounds to say, Ryan has only logged a single TD since Week 3, and he hasn’t scored in either of his past two outings. With Ryan struggling and Julio Jones (hamstring) hurting, the Falcons have found more success running the ball with Todd Gurley. They’ll likely continue to ride Gurley in the red zone, which limits Ryan’s ceiling.

Joe Burrow, Bengals at Colts (Iyer). The rookie is in for another rough afternoon against a tough overall defense to keep cooling him off.

Jared Goff, Rams @ 49ers (Lutovsky). Goff is matchup-proof in a way, as he can do well or struggle against anyone. Last year, Goff’s extremes were on full display in two games against San Francisco: 78 yards, no TDs, one turnover in the first game and 323 yards, two TDs, one turnover in the second game. San Francisco just got shredded for 350 yards and three TDs by Ryan Fitzpatrick, so this isn’t necessarily a complete stayaway, but Goff has a lower floor and ceiling than usual.

Jerry Jeudy, Broncos @ Patriots (Camenker). Jeudy was one of our bust picks last week, and nothing has changed to make us remove him here. Literally, nothing. Jeudy has talent and opportunity with Noah Fant (ankle) and KJ Hamler (hamstring) sidelined along with Courtland Sutton (torn ACL), but he’s facing a Patriots defense that’s strength is in the secondary. Stephon Gilmore may return from the COVID list if all goes well, and either he, the McCourty twins, or J.C. Jackson will have a chance to limit him. Besides, Jeudy’s career high in receiving right now is just 62 yards. He could be a WR3, but if Bill Belichick schemes to eliminate him, which seems likely, Jeudy could easily put up a dud game.

D.J. Moore, Panthers vs. Bears (Lutovsky). Moore had his best game of the season last week, but he saw just five targets and most of his production came on a 57-yard TD. You can’t count on those types of big plays every week, especially when Moore goes from playing the league’s 31st-ranked pass defense to the No. 10 unit. He’s a tough guy to bench, but Robby Anderson is the No. 1 in this offense, and the Bears don’t allow much to secondary receivers.

Dalton Schultz, Cowboys vs. Cardinals (Camenker). As much as we might like to see a Dalton-Dalton punch for the Cowboys, they figure to shift to a more ground-heavy attack. Schultz could still get some targets, but Andy Dalton may focus more on targeting Dallas’ talented trio of receivers: Amari Cooper, CeeDee Lamb, and Michael Gallup. Schultz only had one catch for six yards against the Giants anyway, so he may be an afterthought in this offense.

Zach Ertz, Eagles vs. Ravens (Iyer). The matchup is decent, but Ertz looks broken down and Carson Wentz isn’t trusting him as much, going more to his young journeyman wideouts.

Tyler Higbee, Rams @ 49ers (Lutovsky). Higbee had a three-TD game in Week 2, but other than that, he’s done next to nothing this year. Last week, he saw just two targets while Gerald Everett saw four. Higbee always has upside, but he’s tough to start in any matchup right now.

Buffalo Bills vs. Chiefs (Camenker). This isn’t rocket science. The Bills are playing the Chiefs and Patrick Mahomes, who are averaging 29.8 points per game this season. The Bills are banged up in the secondary as Tre’Davious White (back) and Levi Wallace (ankle) are both dealing with injuries. Mahomes should take advantage of that, so fade the Bills in this matchup and perhaps longer if key members of their back-seven continue to be injured.

Kansas City Chiefs at Bills (Iyer). Josh Allen won’t be having another total meltdown game at home, and there should be plenty of points being scored on both sides.

Tampa Bay Buccaneers vs. Packers (Lutovsky). Green Bay has allowed three sacks and no turnovers while averaging 36 offensive points per game. There’s no reason to trust Tampa this week.