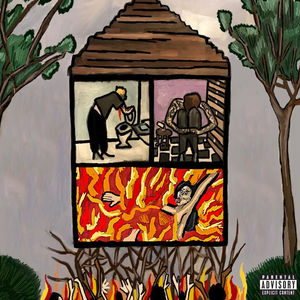 [Intro: Northside Shorty]
Once you’ve found the right doctor
And have told him or her about your pain
Don’t, don’t be afraid to take what they give you
Often, it will be an opioid medication
Some patients may be afraid of taking opioids

[Verse 1: Northside Shorty]
Ayy, death addict, my mathematics you can’t add up
So tragic, my baggage comes with no back-up
Breakin’ patterns; like splittin’ atoms, it ain’t happenin’
Cycles spin, psychosis wins, the world spins
On my motherfuckin’ dick likе a whirlwind
Devilish sins, devilish grins, got motherfuckеrs like
“Here we go again, this motherfucker Scrim

Can never stop for nada (No), too toxic
Send his ass off to the doctor
Between a Xanny and Suboxone, lost cause, lost hope
He a throw-away-way
Way too deep in this hole where he lay-lay-lay”
Lay me down to sleep
Northside Shorty ride curb on creep

Blowin’ dope, remindin’ myself I’m the boss of the Grey, ayy
Bored on the plane, what the fuck is a holiday?
Dreamin’ through the day, what were you saying? My mistake
Fleeting attention, screenshots and mentions
Wish I still had an away message, forever stressing
Live a life in the day, this a day in the life
I’m still the fuckin’ same, covered in spots, not stripes
From broke to fuckin’ paid, this the Grey*59
$uicide for life, rep it ’til I fuckin’ die