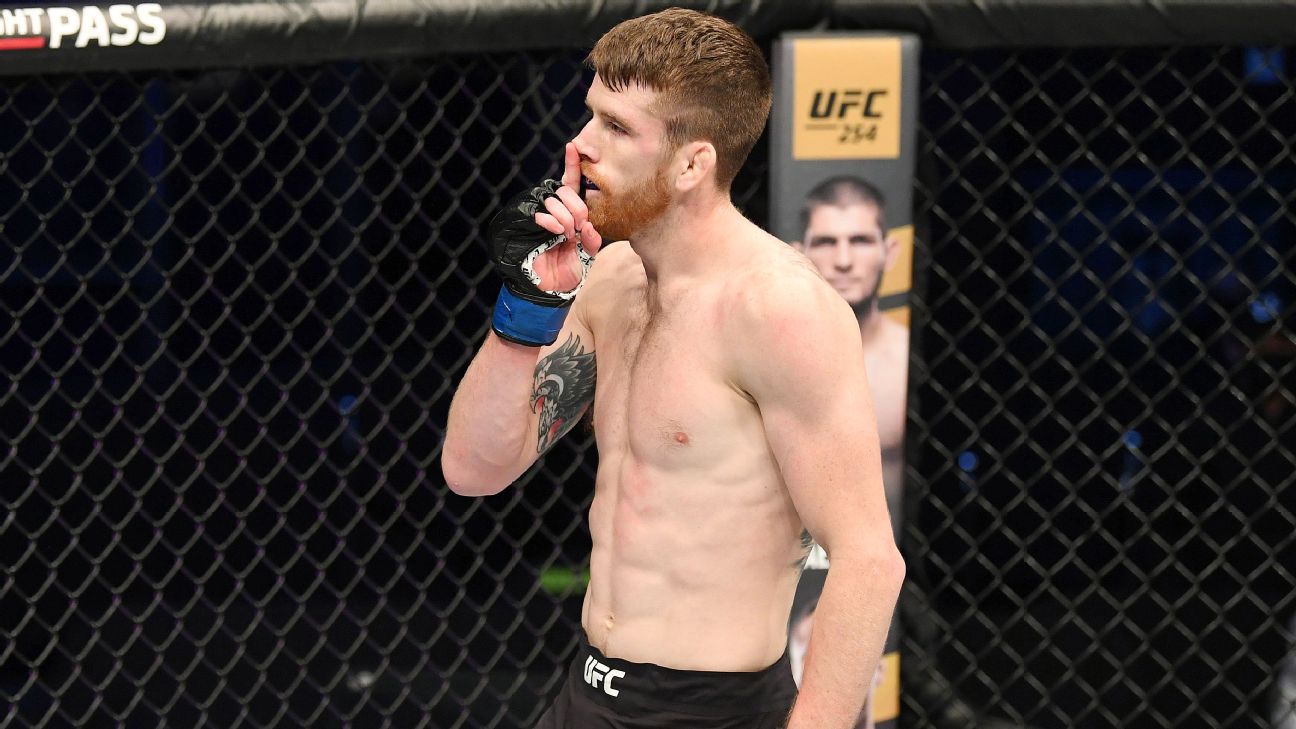 It seemed as if Cory Sandhagen could sense that a finish was coming.

The ESPN+ broadcast picked up Sandhagen shouting to his corner, “His orbital’s broke,” in the second round of his fight with Marlon Moraes on Saturday.

Moments later, wham! A spinning wheel kick from Sandhagen landed on the top of Moraes’ head, dropping the Brazilian. Sandhagen pounced with ground-and-pound, forcing a stoppage at 1 minute, 3 seconds left in Round 2 of the UFC Fight Night main event.

The win was crucial for Sandhagen, who had won seven straight before falling to Aljamain Sterling in June. Now Sandhagen, ranked sixth in ESPN’s bantamweight rankings, is back in title contention after finishing the second-ranked Moraes.

But Sandhagen wasn’t the only fighter to wow fans on “Fight Island” in Abu Dhabi, United Arab Emirates.

During the prelims, Joaquin Buckley set the tone for a night full of knockouts with a memorable spinning-back-kick KO of Impa Kasanganay. And veteran Edson Barboza snapped a three-fight skid with a convincing win over Makwan Amirkhani.

What was your takeaway from the main event?

Helwani: Imagine for a moment that you are a UFC fighter.

You’re in your late 20s and on the cusp of fighting for the title. You’re undefeated in the UFC, too.

Then imagine suffering the worst loss of not only your UFC career but your pro career, as well. Submitted in seconds. Devastated. Back to the drawing board.

And then imagine your next fight — the bounce-back fight — is against the guy who knocked out the guy who beat you. This fight also happens to be your first UFC main event ever.

That’s the situation Cory Sandhagen found himself in Saturday night.

This sort of thing hardly happens in the UFC, by the way. Rarely, if ever, do you lose convincingly only to be rewarded with a higher-profile bout.

On Wednesday, Sandhagen told me he was embarrassed by his loss to Aljamain Sterling in June. He called his performance pathetic.

Well, he made up for it in a big way against the guy who knocked out Sterling almost three years ago, former UFC title contender Marlon Moraes.

Sandhagen showed no ill effects of the Sterling fight early on. He was calm and relaxed. He took some big shots and kept on coming.

And then he nailed one of the best finishes of 2020 — a spinning heel kick — to finish off Moraes in the second. This after he pointed out midfight that Moraes apparently broke his orbital bone. Not sure we would have heard that had this one taken place in a packed arena.

All fights from UFC Fight Night: Moraes vs. Sandhagen will be available to watch on ESPN+.

Watch the complete card on ESPN+

Unfortunately for Sandhagen, and as crazy this sounds, this wasn’t even close to the best finish of the night. That distinction obviously goes to Joaquin Buckley.

But if I know Sandhagen like I do he couldn’t care less. He only wanted to prove that he is better than the guy who showed up against Sterling four months ago, and that he did in a very big way.

After the fight, Sandhagen said the only two fights that make sense for him next are former champions Frankie Edgar or TJ Dillashaw. Remember, Dillashaw’s two-year suspension is up in January. I love that particular idea. That’s a big-time fight for both men.

And even though he didn’t fight tonight, the biggest winner has to be Sterling, who has been left in some weird state of limbo since his win over Sandhagen. For some reason, the UFC has been reluctant to book Sterling in a title fight against the champion, Petr Yan, and Yan even insinuated this week on social media that they aren’t sold on Sterling either.

Well, there can be no denying Sterling now. Sandhagen’s performance only made his win look better.

You know, I reached out to Sandhagen after the Sterling loss. I didn’t ask for an interview, just wanted to see how he was doing. He’s one of the nicest people I have ever met covering this sport, and I felt bad for him.

He replied, “All good. No bad nights in the office at this level. Some lessons only get learned by hurting.”

Well, I think it’s now fair to say Cory Sandhagen learned a big lesson (or two) in June and is now a better fighter because of it.

What’s next for Cory Sandhagen and Marlon Moraes?

Raimondi: Excellent victory for Sandhagen and a statement that he is absolutely one of the best bantamweights in the world. With that being said, it’s probably too soon for Sandhagen to get a title shot, even though that’s what he asked for following his fantastic spinning-wheel-kick TKO of Moraes. Aljamain Sterling is rightfully next up for Petr Yan, though the lack of chatter about that fight is concerning for Sterling. Sandhagen has lost to Sterling, so he has won only one fight in a row after the victory over Moraes on Saturday. There are some interesting names out there at bantamweight, which is one of the deepest divisions in the UFC. Frankie Edgar or Jimmie Rivera would each be an intriguing matchup for Sandhagen.

But how about this idea: Sandhagen is the first fight back for former bantamweight champion TJ Dillashaw. After his two-year EPO suspension is complete in mid-January, Dillashaw should definitely jump back into the contender conversation. It would probably be inappropriate to give someone coming off a doping ban an immediate title shot. But Sandhagen is the next best thing. Dillashaw vs. Sandhagen in a bantamweight title eliminator would be a banger — and hopefully a five-round fight. It would bring back memories of Dillashaw and former champ Dominick Cruz, who has been an inspiration for Sandhagen’s striking style.

And for Moraes, this is a weird spot for him. He was coming in off a win over Jose Aldo that most people thought he lost. In fact, Aldo was granted a title shot off that fight, even though technically Moraes won. This one, Moraes takes the L outright — a highlight-reel finish for Sandhagen — which leaves him losing some ground in the bantamweight contender race. Now, that doesn’t mean he’s done. Moraes is still one of the most dangerous men at 135 pounds in the world, no doubt.

Next up for him should be a litmus-test type of fight. Should Moraes remain in that top-five conversation at bantamweight? Or does he need a step back in competition? We’d find that out by pitting him against Pedro Munhoz, who is coming off a very, very close August loss to Frankie Edgar. In some ways, Moraes and Munhoz are in a similar place at bantamweight — coming off close losses and now oddly on the outside looking in at the upper crust of the division, but only one win away from being there.

What was your first thought when you saw Joaquin Buckley’s KO?

Joaquin Buckley might have just secured the best knockout of 2020 as he drops Impa Kasanganay with a spinning kick at UFC Fight Night.

Wagenheim: Confession: At the moment when Buckley connected with his kick, I was looking at my phone. An incoming text had distracted me. (Damn, I hate fight-night texts.) And yet I’m going to still declare that I saw the knockout, because in my book a knockout is not complete until the fighter who gets dropped lands on the floor. And when I heard the broadcasters go “Whoa!” in three-part harmony, I looked back at the TV. And … Kasangaway … was … still … falling. I’ve never seen someone collapse to the canvas so slooooowly.

My first thought? I hope Kasangaway gets up. (He did, with some assistance, and seemed able to sit upright on his stool.)

My second thought? Let’s see that again, so I can relive all of it — the kick that Kasangaway caught, the spinning leap by Buckley, the full facial connect, the dazed, open eyes of the one who took the brunt of that connection, the slow-motion descent in real time, the head bouncing off the canvas, the winner’s walk-off at the same moment that the referee was pouncing forward, just in case.

On a night when six fighters authored knockouts, a few of them pretty spectacular, the other five had to settle for second best.

What was the best finish of the night … other than the best one you’ve ever seen?

Raimondi: The first four fights Saturday had zero finishes. And then the floodgates opened with three KO/TKOs in a row, beginning with Buckley’s truly absurd knockout of Kansanganay. Obviously, that one was the best of the night. Actually, it was the best of the year and one of the greatest in the history of the sport. It will live on in UFC highlights until the end of time. But there were other strong finishes, too.

The one that stands out most — other than Buckley’s — was, of course, the main event. Sandhagen styled on Moraes with a gorgeous spinning-wheel-kick finish. It was almost like he watched Buckley earlier and got an idea in his head. Had Sandhagen’s knockout been on any other card, it would probably be getting love as a Knockout of the Year contender. But Buckley’s kick was so dang absurd, Sandhagen is almost overshadowed. He shouldn’t be. Sandhagen finished one of the top guys in the world at bantamweight in Moraes with an absolutely epic technique, one he apparently honed kicking an inanimate Body Opponent Bag at home during quarantine. Beautiful finish and coming-out party Saturday for Sandhagen.

What were your thoughts on Edson Barboza’s win?

Wagenheim: Boy, did Barboza need this victory. And now that he has it in his back pocket, watch out.

Barboza seemed a bit tentative at the start of his fight with Makwan Amirkhani, and who could blame him? He had lost three in a row, five of his past six, and at 34 years old, there’s not a lot more room for error. So the Brazilian did not unleash the full fury of his striking, but what he did deliver was enough to serve as a warning to the featherweight division.

The longtime lightweight contender moved down to 145 pounds in May and dropped a split decision to Dan Ige. It was Barboza’s second straight split-decision loss, evidence that even in the midst of a losing streak he was not exactly getting overmatched. And consider the other opponents he faced during his skid: 155-pound champion Khabib Nurmagomedov, interim champ Justin Gaethje and contenders Kevin Lee and Paul Felder. A lot of fighters would not fare so well in running that gantlet.

But now that Barboza is back in the win column, expect his go-for-it mentality to return as well. That will please UFC matchmakers. Will they book Barboza next against a top-five featherweight, as he requested in his postfight interview inside the cage? It’s certainly possible, considering how the UFC loves to give big opportunities to fighters who entertain.