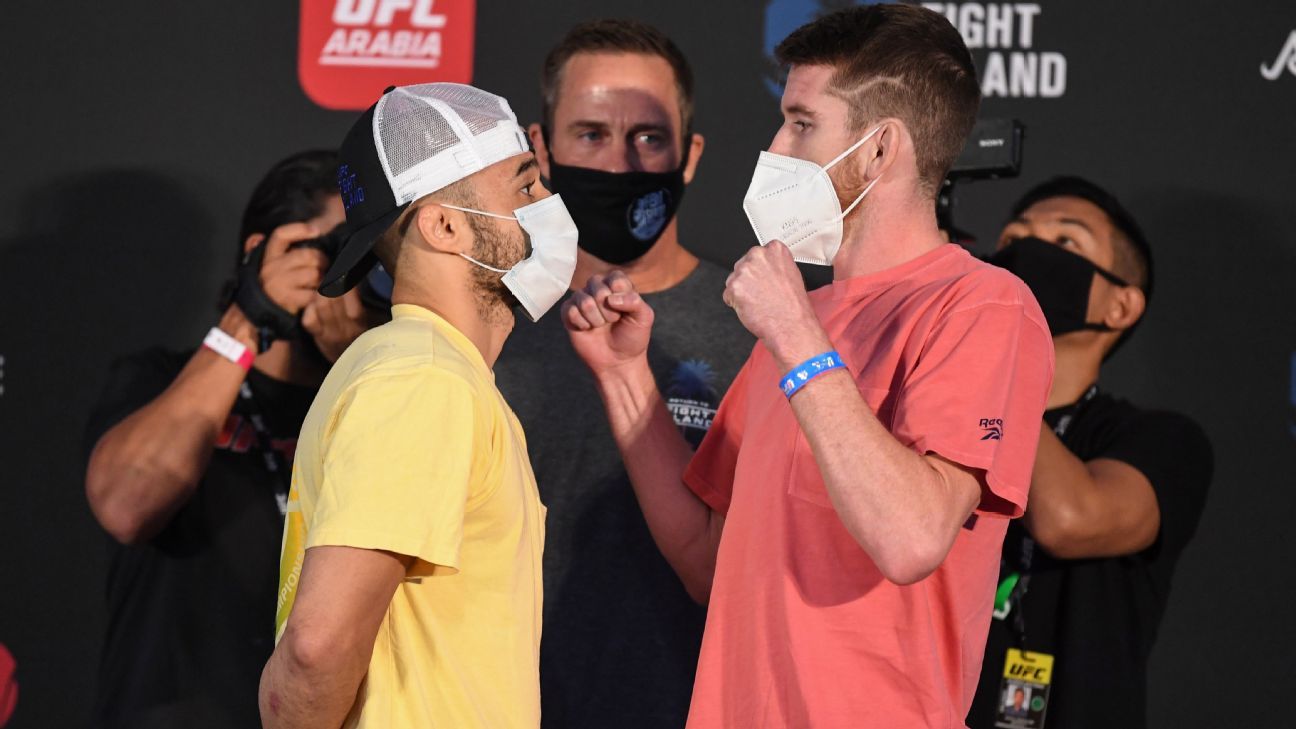 Marlon Moraes meets Cory Sandhagen in the main event of UFC Fight Night in Abu Dhabi, United Arab Emirates. The card will take place at the Flash Forum on Yas Island, which the UFC has dubbed “Fight Island,” the promotion’s international home during the coronavirus pandemic.

Coming in, ESPN has Moraes ranked No. 2 in the world at bantamweight and Sandhagen at No. 6. The winner could be a future title contender.

Moraes (23-6-1) has won five of his past six fights, with the only loss in that time coming to Henry Cejudo in a bout for the then-vacant bantamweight title. Moraes, a 32-year-old Brazilian, is coming off a split-decision win over former featherweight champ Jose Aldo at UFC 245 last December. Moraes is the former World Series of Fighting bantamweight champion, and he already owns wins over UFC bantamweight contenders Aljamain Sterling and Jimmie Rivera.

All fights from UFC Fight Night: Moraes vs. Sandhagen will be available to watch on ESPN+.

Sandhagen (12-2) lost for the first time during his UFC run at UFC 250 in June, a submission defeat to Sterling. Sandhagen, a Colorado resident, was on a seven-fight winning streak prior to that. The 28-year-old is thought to be a future star in the division, with precision striking and unorthodox footwork somewhat reminiscent of former bantamweight champion Dominick Cruz.

In the co-main event Saturday, Edson Barboza and Makwan Amirkhani meet in a clash of featherweights. Barboza (20-9), a 34-year-old Brazilian, has lost five of six. Amirkhani (16-4), a 31-year-old from Finland, has won three of four.

Cortez continued her roll in her second UFC bout. She won her eighth straight with a strong performance over Egger, beating her to the punch in the fight’s rare striking exchanges and controlling her on the canvas for nearly the entire time.

The 26-year-old from Scottsdale, Arizona, had nearly 10 minutes of control time on the canvas during her 15 minutes in the cage with Eggers, who was making her UFC debut.

All three judges scored the bout 30-27 for Cortez.

Egger, who is 32 and from Switzerland, had won three fights in a row.

Cortez doing great at winning the chess match on the ground. #ufcfightisland5

Silva, the significantly shorter man, had to make it a brawl. He succeeded in doing so, but it still wasn’t enough.

Ulanbekov kept Silva at bay in a unanimous-decision win (30-27, 29-28, 29-28) to open UFC Fight Night: Moraes vs. Sandhagen. Silva made things ugly. He closed the distance, created scrambles and roped Ulanbekov into wild exchanges.

But Ulanbekov still did more damage, opening up a cut to the side of Silva’s right eye in the second round. Ulanbekov was also able to outwrestle Silva in spots, though Silva refused to go away. The fight finished with Silva pushing ahead throwing haphazard hooks. He landed two hard left ones and Ulanbekov landed a hard right. It was a fun way to end an entertaining, back-and-forth battle.

Ulanbekov, 29, has now won four straight. This was the Russia native’s UFC debut. Silva, a 30-year-old Brazil native, has dropped all three of his UFC fights since debuting in 2019.

Flyweights setting the pace for the night! Lesgo!🔥#UFCfightisland5

How does new featherweight titlist Emanuel Navarrete stack up against the best in the division?

Tory Lanez Pens A Heartfelt Message To His Son, Kai