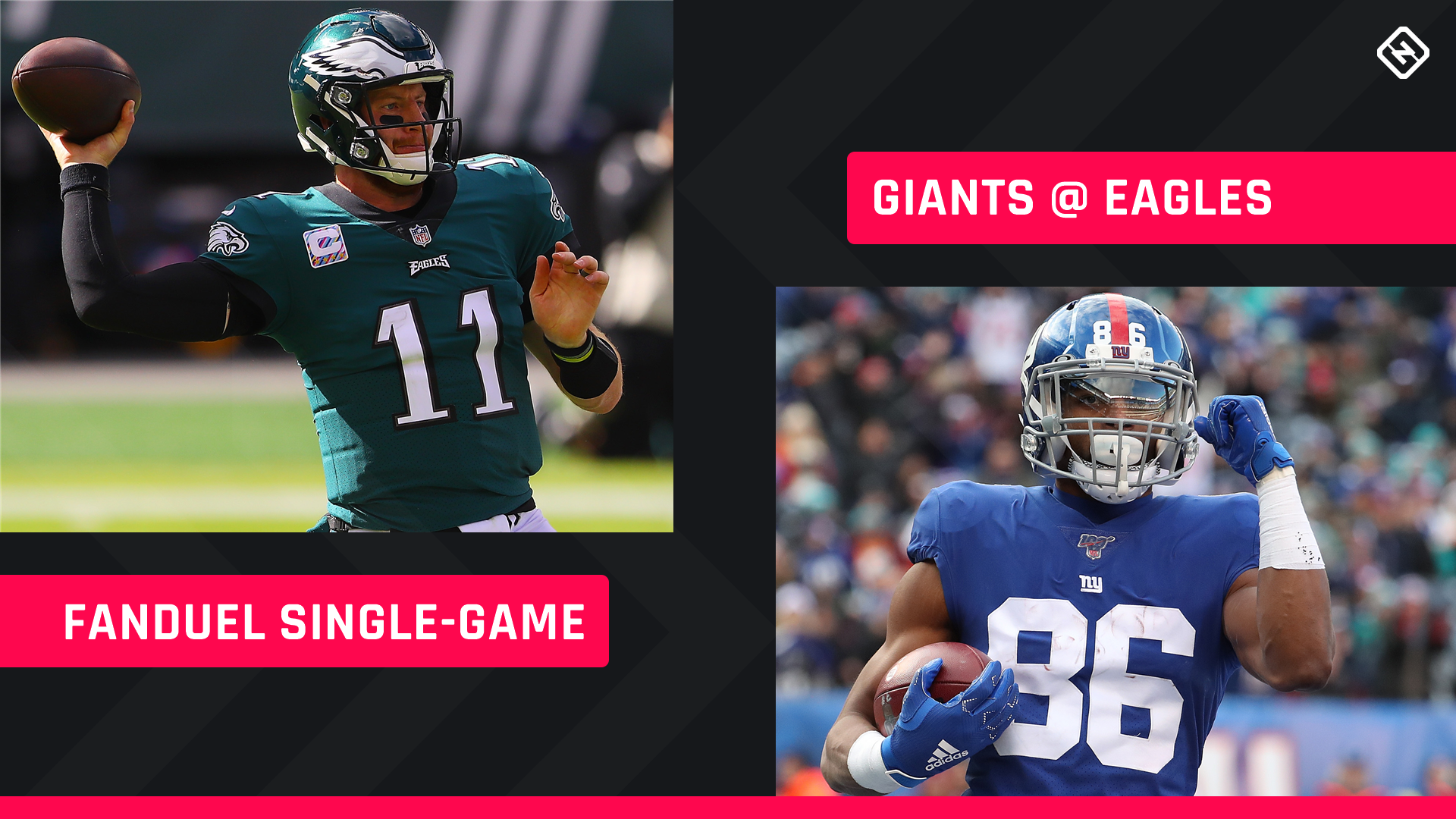 This week’s Thursday Night Football game will be a showcase of two teams from the NFC East.

The Eagles and the Giants have a combined record of 2-9-1, but one of them could be sitting in first place at the end of this game. Yes, that’s just how bad the NFC East is this year.

Because of the poor play of each team so far, this slate is a tough one to project for NFL DFS players, and injuries have thinned the ranks of this contest even more.

Our FanDuel single-game lineup picks will try to identify sleepers and craft a lineup with the highest floor and a decent ceiling.

That will be easier said than done. Because of injuries to top players Miles Sanders (knee) and Zach Ertz (ankle), the MVP options are extremely limited on this slate.

We’re going with the safest option there, which means we’ll probably have the highest-owned MVP. That means we need some differentiation with the rest of our lineup.

As a result, our strategy was to spend down on some injury replacements and leave a whopping $7,000 on the table.

That gave us room to pivot off these picks if you don’t like them, but spending down so much also makes this lineup a bit risky.

Wentz will almost certainly be the highest-owned MVP on the slate. He has produced at least 19.42 FanDuel points in his past four outings and provides a higher floor than any other player in this contest as well as a pretty high ceiling.

Wentz averaged over 300 yards and 1.5 TDs per game against the Giants last year, and he should continue to find success against the defense this year after he just carved up the Ravens late and generated 10.9 FD points with his legs.

Wentz almost has to be the MVP unless you want to trust Daniel Jones or a non-quarterback despite the relative inconsistencies of those players this year. None have the same floor as Wentz, so we’ll lock him in at this price.

In back-to-back weeks, Slayton has logged double-digit FD points. He had an eight-catch, 129-yard game against the Cowboys in Week 5 before catching two passes for 41 yards and a TD against Washington last week.

Slayton’s production relies on Daniel Jones’ ability to find him downfield and avoid turnovers, so he’s a bit of a risk, but Slayton could also be the highest scorer on this slate of all goes well.

Speaking of players that could be big-time scorers, Fulgham would qualify. He finished a distant second as my MVP choice, but he’s a must-have in all single-game lineups.

Fulgham has caught a TD in three consecutive games and has racked up 23 targets in his past two outings.

Wentz is developing a real connection with him, and even if Alshon Jeffery (foot) or DeSean Jackson (hamstring) return on a short week, Fulgham should stick get a crack at being the team’s No. 1 receiver.

He averages 18.47 FD points per game, and unless James Bradberry is able to slow him down, he should crack double digits once again.

This is the point where things start getting a bit weird. With Miles Sanders (knee) likely out in this game, Scott will be the top back for the Eagles.

Scott was the top back for the Eagles when Sanders was out Week 1 against Washington and he generated just 6.4 FD points.

The Giants have a solid defensive line, but if the Eagles can get Scott the ball in space or dump some passes off to him, that will give him a chance to be a top play.

He will have a high floor thanks to his touches, and he should easily pay off this price tag.

This is where things continue to get weird. With $13,500 left, there aren’t a lot of spend-up options available that we like. So, we’re spending down and grabbing a player who may be returning from IR this week.

If Shepard (Toe) plays, he could see quite a few targets over the middle of the field, an area where the Eagles are weak.

The Eagles have allowed the 10th-most FD points per game to WRs this year (40.1) so going after another Giants pass-catcher is ideal.

Taking Shepard here will give us some key lineup differentiation by leaving so much money on the table, but there are a lot of potential pivots if you aren’t big on Shepard.

The best among them are Evan Engram, Golden Tate, and Richard Rodgers.