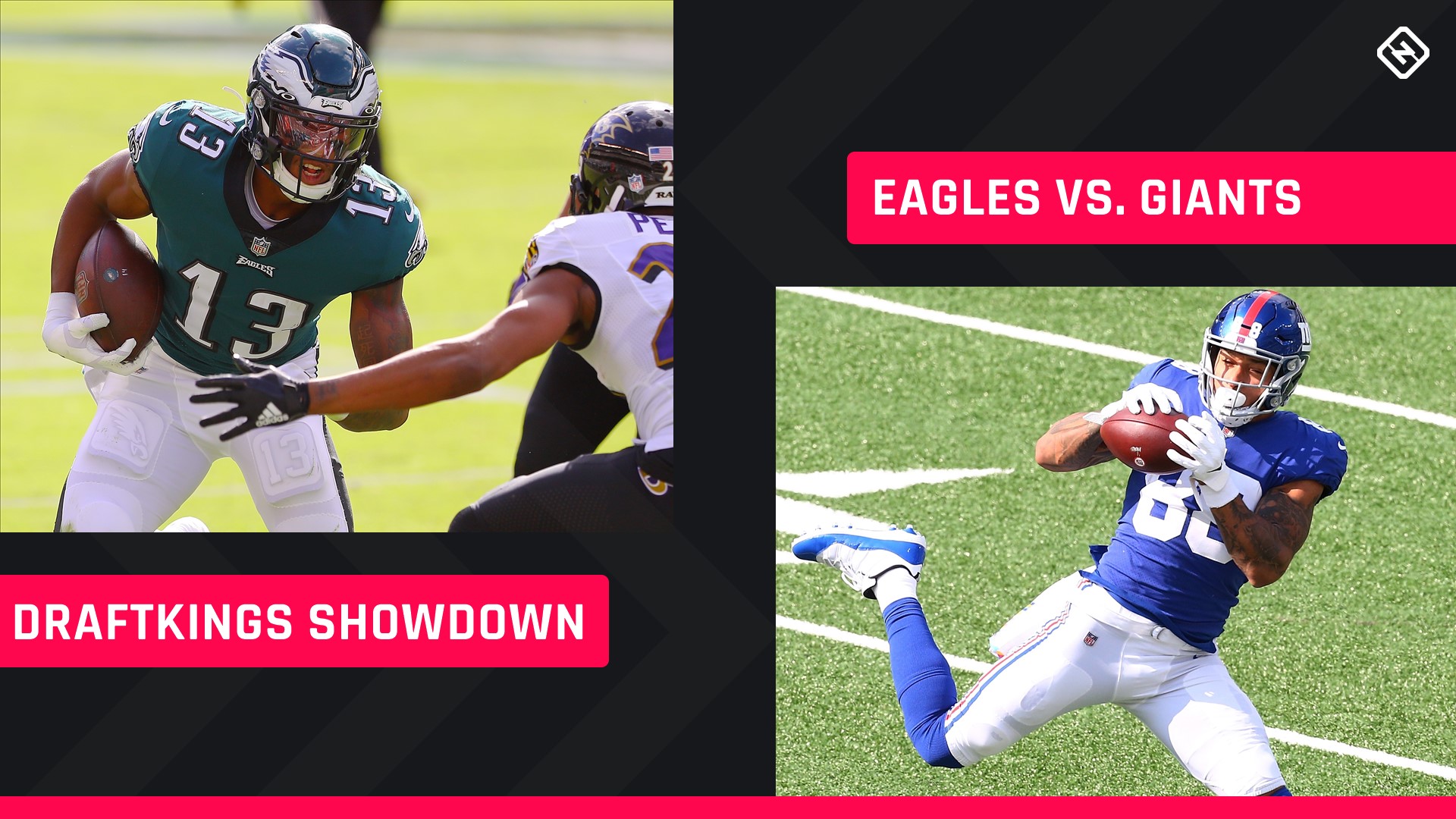 Eagles vs. Giants provides a national television audience the opportunity to officially get on the Travis Fulgham hype train.

We’re already on it, and that’s why he’s our DraftKings Showdown captain for this Week 7 Thursday Night Football matchup.

Philadelphia is dealing with a ton of injurie, and New York just isn’t very good, so it could be a crazy, unpredictable game for DFS purposes.

We’ve tried to account for that uncertainty by using one supreme value play in Hakeem Butler to pad the rest of our lineup with the proven guys available in this game.

We’ve also chosen to fade Daniel Jones and Devonta Freeman in favor of more Eagles, so that’s the one potential weak point here.

Fulgham has been a revelation for the Eagles, and with their absurdly long injury list, he should continue to be flooded with targets.

That’s a fun proposition against a bottom-10 Giants pass defense against wide receivers.

We’re not crazy about either QB in this game, but if one is likely to find his way to multiple touchdowns, it’s certainly not Daniel Jones.

Wentz has added intrigue in recent weeks with his increased willingness to run, too, which helps pad his floor.

Slayton is Jones’ top TD target, and since we’re fading Jones, it makes sense to try and find our way to whatever scores he might throw.

The Eagles are right next to the Giants in fantasy points allowed to WRs, so Slayton should be licking his chops for this matchup.

As long as Miles Sanders (knee) is officially out, Scott is a great play even with DK correctly adjusting his price.

He’s a shifty pass-catcher who can also put together explosive plays in the running game. Assuming the Eagles get out to a big lead, Scott should reach 20 touches in this one.

The Eagles have allowed the fourth-most DK points to tight ends in 2020.

With Engram being possibly New York’s most-talented offensive player at this point, we’ll rely on those bad numbers against TEs to make him more worth playing than another Giants wide receiver.

Butler is a total shot in the dark that allows us to have a solid first five guys. He was active for the first time last week but didn’t see the field.

Now with Zach Ertz (ankle) out and Dallas Goedert (ankle) a longshot to play, the Eagles need an athletic tight end to run some of their down-field routes.

No offense to Richard Rodgers or Jason Croom, but Butler is the converted receiver in the room and could get an opportunity against the Giants.