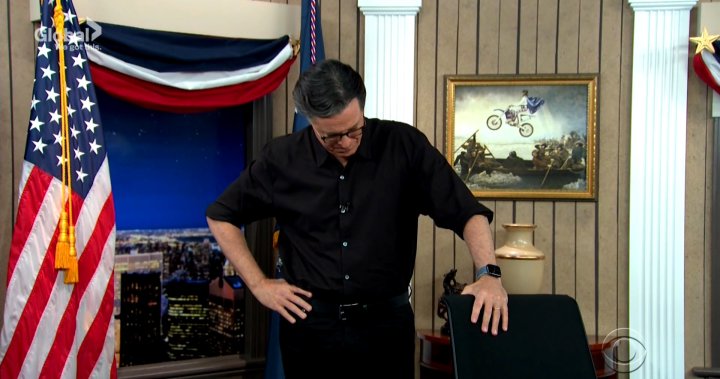 Stephen Colbert appeared to hit his limit last night on The Late Show.

Following a Thursday evening White House speech by Donald Trump — in which he said the 2020 presidential election was rigged and there were fraudulent votes counted for his opponent Joe Biden — Colbert called Trump a “fascist” and was overwhelmed by emotion.

Colbert didn’t mince words in responding to Trump’s remarks; he wore black because he was “dressed for a funeral.” He also stated that he was standing instead of sitting as he usually does for his opening monologues, as he was so riled up.

“The president came out into the White House briefing room and lied for 15 minutes,” Colbert said. “Just nonsensical stuff about illegal vote dumps and corrupt election officials and secret Democratic counting cabals, and, I don’t know, long-form birth certificates, probably. It’s all the same. And if you did not know that Joe Biden was getting close to 270, Donald Trump just provided all the proof you will ever need.”

In order to be elected president of the United States, a candidate must reach 270 Electoral College votes.

“So we all knew he would do this,” he continued, before tearing up and standing silent, head down, for approximately 15 seconds. “What I didn’t know is that it would hurt so much. I didn’t expect this to break my heart. For him to cast a dark shadow on our most sacred right from the briefing room in the White House — our house, not his — that is devastating.”

“He is the president of the United States,” he said. “That office means something, and that office should have some shred of decency.”

He then called on Republicans in power and asked them to denounce Trump and his actions.

“Republicans have to speak up. All of them,” he said. “Because for evil to succeed, all that is necessary is for good men to do nothing. You only survived this up until now because a lot of voters didn’t want to believe everything that was obvious to so many of us, that Donald Trump is a fascist.”