Source: Dolphins to go with Tua as starting QB 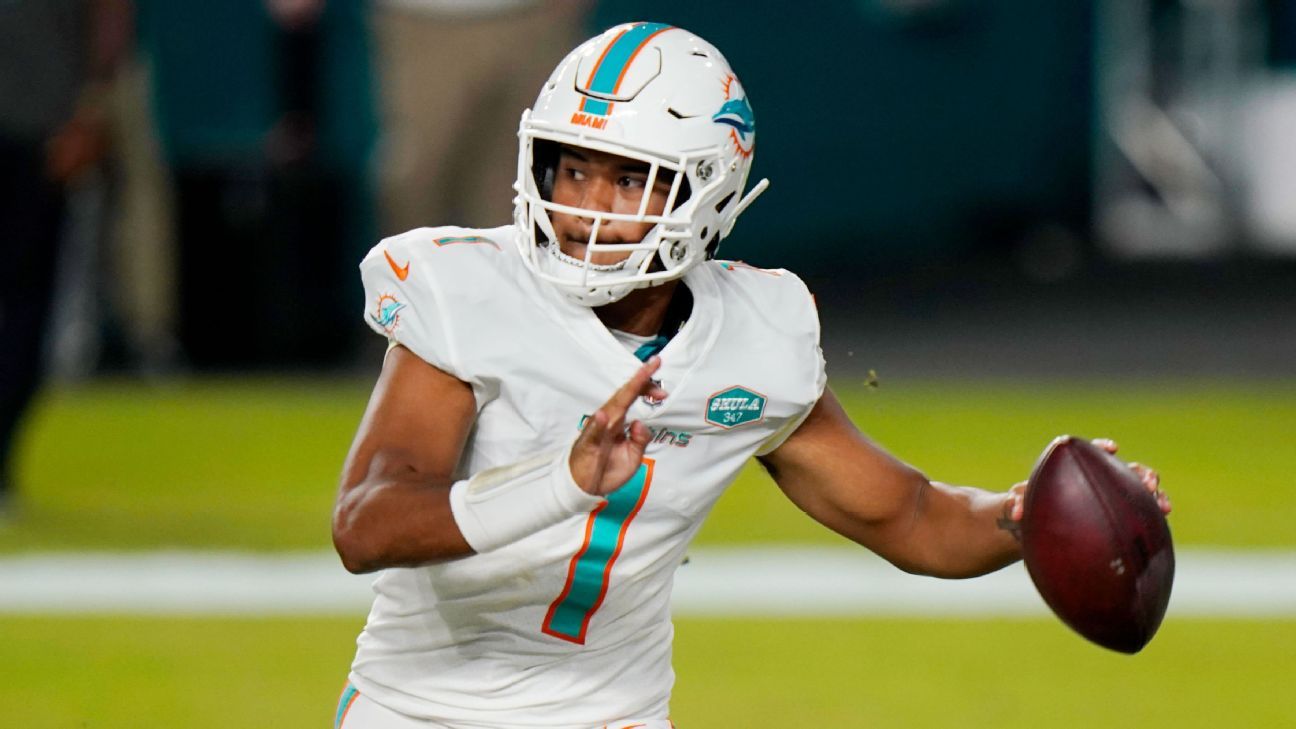 With the Dolphins currently on their bye week, it will give Tagovailoa two weeks to prepare for the transition.

Tagovailoa’s first NFL start will come 351 days after he suffered a dislocated right hip and posterior wall fracture. It has been a remarkable recovery from an injury that some thought could derail his ability to play high-level football again.

The move comes as a bit of a surprise because of the timing. Veteran Ryan Fitzpatrick had been playing well, leading the Dolphins to two consecutive wins by a combined score of 67-17. He also has the seventh-best QBR (79.6) in the NFL.

For the Dolphins, this is the beginning of a new era. They believe Tagovailoa is their franchise quarterback — the one to lead them to being a consistent championship contender. That’s a standard the Dolphins haven’t had since Dan Marino was their starting quarterback.

Tagovailoa saw his first NFL action Sunday in a blowout win over the New York Jets. He went 2-for-2 for 9 yards while playing just five snaps, but he showed his mobility while rolling out on a pass to the left and gave the Dolphins coaching staff a small glimpse of how he can lead an offense.

The Dolphins’ fan base erupted in cheers and chanted “Tua” at the first glimpse of their potential new franchise quarterback.

“I definitely could hear it. There’s nothing else playing in the stadium, so I could hear that,” Tagovailoa said of the reception. “And that was awesome. But to just be out there with my teammates, being my first time, and getting the support and love from them, I think that was super awesome.

“And then you have a 16-year vet like Fitz, who has no animosity toward it as well, who’s just been supportive that entire time. Good drive, bad drive, he comes to the sideline and just talks through his process with why he did some things. I’m very fortunate to have a mentor like him who is just very encouraging on the field and then this guy is, like, he’s just very personable off the field as well.”

Dolphins coach Brian Flores has handled the situation by allowing Fitzpatrick to lead the early portion of the season while Tagovailoa learned from him and got prepared for his opportunity.

Tagovailoa will be the 22nd quarterback to start for the Dolphins since Marino retired in 2000. None of the previous 21 made a Pro Bowl appearance; none led the team to a playoff win in nearly 20 years.

In his three seasons at Alabama, Tagovailoa was the most efficient passer in college football history. He won the Walter Camp and Maxwell awards and was the Heisman Trophy runner-up in 2018.

Miami selected him with the No. 5 overall pick in April’s draft despite all the uncertainty about his hip injury.

But now, it’s about what he can do on the field in NFL games.

Tagovailoa was deemed healthy at the start of training camp and quickly showed his mobility during practices. The team’s comfort in his health progress came at the start of Week 2, when he was removed from the team’s injury report.

Next Sunday will likely be the first time Tagovailoa gets tackled since suffering that November 2019 hip injury, and that’s the last hurdle he will need to clear to feel back to normal.

During the offseason, Fitzpatrick said he knew he was the “placeholder” for Tagovailoa and would be the young quarterback’s mentor and biggest cheerleader whenever the time came for him to pass the keys to the offense.

The six-game wait was important for Tagovailoa, who asked plenty of questions and soaked up insight from Fitzpatrick and Gailey as he tried to catch up on what he missed during a shortened offseason. Coaches have raved about his growth from the start of training camp to where he is now six weeks into the regular season.

Fitzpatrick was named the Week 1 starter without any set timeline on how long he would stay in this role, and he certainly had some peaks, including a 350-yard, three-touchdown performance in a Week 5 blowout win over the San Francisco 49ers. In six games, Fitzpatrick completed 70.1% of his passes for 1,535 yards, 10 touchdowns and seven interceptions.

At 3-3, the Dolphins still have hopes of making a playoff push. Tagovailoa provides more mobility, accuracy and playmaking ability to the offense, even if he doesn’t have as strong of a grasp on it as Fitzpatrick does.

Tagovailoa becomes the third rookie quarterback to start a game this season, after the Cincinnati Bengals’ Joe Burrow and Los Angeles Chargers’ Justin Herbert. He also becomes the first left-handed NFL quarterback since Kellen Moore retired in 2017 and the first to play in a game since Michael Vick in 2015.

For Tagovailoa — a player with the prestige to already have a documentary on national TV, a high-selling NFL jersey and support from some of the biggest stars in Miami sports history — expectations couldn’t be higher. He could be the Dolphins’ biggest star since Marino. Tagovailoa believes he was destined for this moment, and he says he’s ready to take advantage of it.

“He’s a hell of a player. Miami, especially at the QB position, really needs that. They need a leader. They need a player,” former Miami Heat star Dwyane Wade told ESPN this summer. “To come in as a young player and win a game in the second half of a national championship game — that shows some grit, that shows some balls. People have to really believe in you. Miami needs that. The Dolphins need that. Even though I’m a [Chicago] Bears fan, I was rooting for them to get him because Miami needs to get back to where the basketball program is.”