Ron Rivera draws on lifetime of lessons to face cancer, chaos in Washington 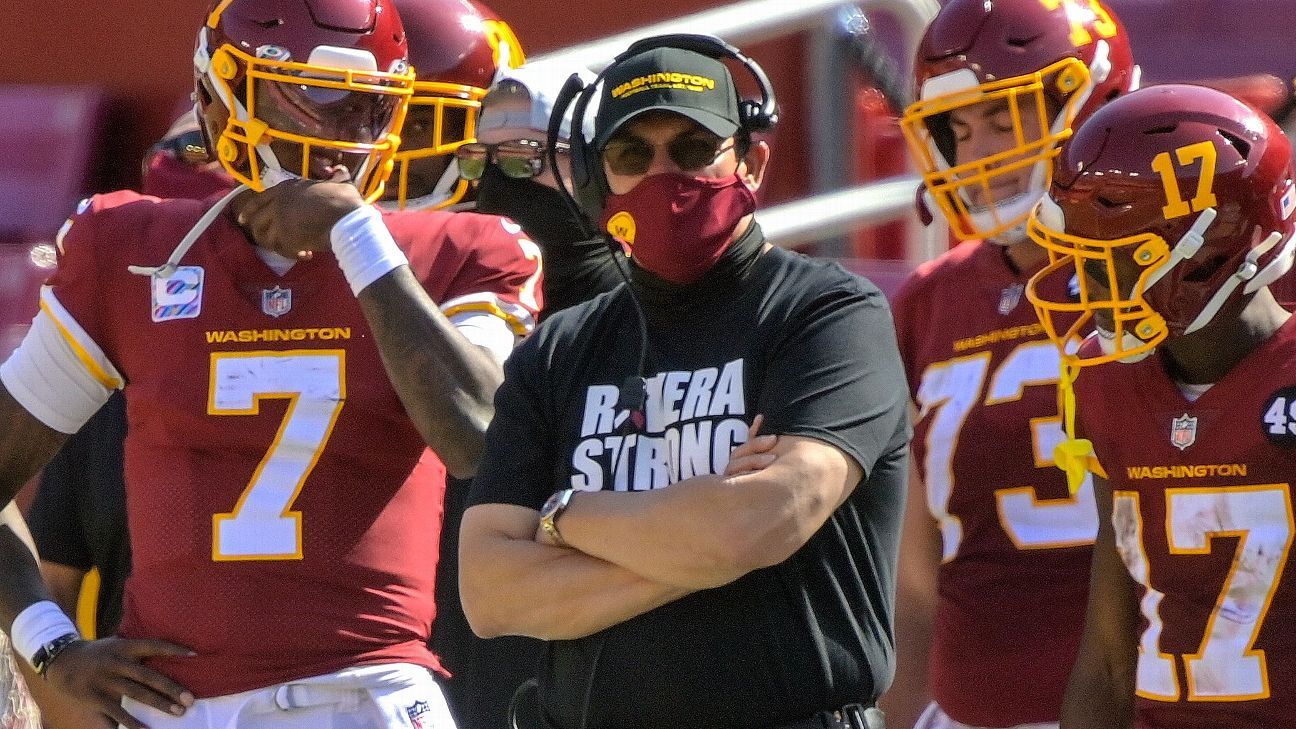 ASHBURN, Va. — The signs of support were as evident Sunday as the signs of reality.

On a day when the Washington Football Team sent multiple messages to coach Ron Rivera — coaches and players wearing black “Rivera Strong” T-shirts during warm-ups and a section of FedEx Field dubbed “Coach’s Corner” with about 400 cardboard cutouts purchased by friends and family — the effects of his cancer continued to mount a challenge.

During Washington’s 31-17 loss in Week 4 to the Baltimore Ravens, Rivera walked to the locker room at halftime with a hand placed on the shoulder of a team employee. During the game he would retreat to the bench during a break, taking a seat to rehydrate. But, as has been his habit since arriving in Washington, where he has faced one challenge after another, Rivera pushed through.

This followed a week in which chemotherapy caused him to miss practice Wednesday and leave early Thursday. During an interview Monday with Robin Roberts on “Good Morning America,” he said he has three more weeks of treatment and one more round of chemo remaining.

“It’s a struggle. It’s a battle,” said Rivera, who has squamous cell carcinoma, the second-most-common form of skin cancer.

That quote encapsulates Rivera’s short time with the organization. He was hired New Year’s Day, given more power than any previous coach under Washington owner Dan Snyder (including Super Bowl winners Joe Gibbs and Mike Shanahan) and tasked with building something Snyder hasn’t fostered in his two decades of ownership: a consistent winner.

Though cancer is a personal battle — and the most important one — Rivera had his hands full with numerous issues before he coached a game for Washington, including:

He has approached each situation in the same manner, drawing on a lifetime of lessons.

Then in early August, Rivera, 58, learned he had cancer. Doctors caught it early and the prognosis is good, but trying to win NFL games while battling cancer is not easy.

“He can’t control the fact he has cancer,” Ron’s wife, Stephanie, said. “But he can control his attitude, how he prepares and the effort that plays into it. It’s all about how you manage your time and focus your energy. At this point, his focus has to be on positivity.”

Indeed. Washington is 1-3 and in the early stages of a rebuild with a quarterback, Dwayne Haskins, who has made 11 NFL starts. For an organization that has experienced chaos over the years, a calming, steady hand is needed.

“They have the perfect coach for that job,” former Washington head coach Norv Turner said.

Rivera understands the ravages of cancer: His brother Mickey died in 2015 at age 57 after a two-year battle with pancreatic cancer. Rivera choked up after Sunday’s game when discussing his brother, whose face adorned one of the 400 cardboard cutouts in the stands.

But Rivera also knows his situation is different.

“For me, it’s another challenge,” he said. “It’s a challenge I accept. I’m realistic about it. I’ve got to continue to be the person that I am and be disciplined about it, go about my business, do things that I need to do.”

And fall back on the lessons he has learned throughout his life, especially from his father, Eugenio, who served in the military for 32 years, setting the tone for the family. However, Steven Rivera, the oldest of four boys (followed by Mickey, Ron and John), said his mother, Dolores, not Eugenio, was the general at home.

“We were under some stringent rules to make sure our house was always kept in order,” Steven said. “If my dad brought a commanding officer over or any friends and the house was in disorder, we’d be disciplined real quick. … What Mom said went.”

That meant chores every weekend — whether they were mowing the lawn or washing clothes or cleaning the garage — and Sunday was for church.

“Family rules came first,” Steven said. “Growing up in a military family, you just know. It was just expected.”

Ron has applied the military style he learned from his parents to his own life, be it coaching or fighting cancer. Especially his father’s way of handling situations.

As Steven said, their father “was in charge of a lot of people.” When he made decisions, he would do so deliberately. And he’d tell his kids: If it makes sense, do it, if it doesn’t, then don’t.

When social justice protests began in the spring, Washington took its time releasing a statement about the movement. Rivera, who was among those leading the organization’s response, was busy consulting police officers, psychologists, players and more. Days passed before Washington made a statement and unveiled a plan.

“He’s very measured in how he does things,” Stephanie said. “That’s why he didn’t respond right away to [Black Lives Matter], because he had to make sure he understood everything going on. Everyone’s in a rush. He’s very much about getting the facts and making smart decisions based on those facts.”

Said Steven: “He looks at the entire picture. He’s always been like that. If you make rash decisions, you get unfavorable answers.”

Eugenio Rivera taught his sons to be accountable.

“Don’t make excuses; it comes back and bites you twice,” Steven said. “If you made a mistake, admit it. But if you lie, oh my God, you’ll have hell to pay.”

Steven, a retired police officer who lives in California, said he and his brothers still believe in that thinking.

“People’s words don’t mean anything anymore,” Steven said. “Ron and I talk about that on a daily basis. … If you ever want to get on his bad side, it comes down to your integrity. If you lie to his face, that will be the end. Ron believes your word is your bond. Our parents taught us that.”

Rivera’s reliance on a disciplined structure has helped him handle his cancer treatments.

It starts with making his bed every morning, another nod to his upbringing. In fact, one of his favorite books is General William McRaven’s “Make Your Bed: Little Things That Can Change Your Life … and Maybe the World.”

He also routinely reminds assistants that if they’re working around the clock, they need to be more efficient.

“If he makes it to the news, it’s a big deal,” said Stephanie, a former coach in the WNBA. “We’ve seen tons of evidence and sleep studies. The whole myth of coaches working until 3 a.m. and getting there at 5 a.m. is ridiculous. There’s so much research as to how sleep is important. He’s like, ‘I need to be sharp.’ He knows he needs sleep.”

‘As stable and steady as they come’

There are concessions to the cancer: He is not driving as he goes through treatments, so his daughter Courtney, who works for the Washington franchise, and Stephanie (who gets tested for COVID-19 every day, just like other members of the organization) alternate driving him to and from work. By 11 a.m. Monday, when Rivera met with reporters on Zoom, he said he had already napped twice.

His overall plan allows him to handle stress better. During vacation this summer, the franchise’s name change was a dominant topic. At one point, following a team announcement, Rivera was on the phone with ESPN during a round of golf.

Rivera paused to take a shot, which didn’t go well, and the frustration was evident. Despite his frustration, he stayed even-keeled. Then on his next ball, he hit an approach iron near the cup, resumed the interview for another minute and hung up. The emotions of the moment changed; the way he handled them did not.

“Coach is as stable and steady as they come. It’s the same guy every day,” said Washington offensive coordinator Scott Turner, Norv’s son. “He doesn’t panic. If an issue comes up: this is the plan, this is how we attack it, and he expects everyone to be on board.”

That’s one of the lessons he picked up through reading, a hobby he has enjoyed since childhood. He likes reading about generals and other leaders such as Dwight D. Eisenhower, Franklin D. Roosevelt and Abraham Lincoln. He recently said he’s reading a book about Winston Churchill (another favorite) called “The Splendid and the Vile.”

Are you ready for some football? Play for FREE and answer questions on the Monday night game every week. Make Your Picks

“It’s really about hunkering down for the long haul,” Rivera said. “There’s a lot of good messages in it about preparation … understanding that things aren’t going to be easy, they’re going to be hard, but getting everybody to rally. I found some solace in reading a book like that.”

He leans on other people’s experiences, such as coaches who were fired from their first jobs and are succeeding in their second stops (such as Kansas City’s Andy Reid). Or those who have had cancer, such as former Indianapolis Colts coach Chuck Pagano. Rivera also talked with Gibbs about how he handled the 1987 strike season, when the franchise won its second Super Bowl.

He can also call upon his own past. During the NFL’s lockout season of 2011, he was a first-time head coach with Carolina and he had a rookie quarterback in Cam Newton. Then, in 2017, Carolina owner Jerry Richardson faced a sexual harassment scandal. Rivera was, as he is now, the face of the franchise.

“[Rivera] didn’t shy away from it,” said Washington linebacker Thomas Davis Sr., who was with the Panthers at the time.

Rivera has said multiple times he is committed to Washington for the long haul. Those who know Snyder well — and who have worked for him — wonder how long that actually means for Rivera. Some say Snyder will be patient for two years, but would need to see real progress by the end of that second season. Time will tell on how long Rivera will last; in the meantime, he must push forward.

That’s what he has done to reach this point. When Rivera prepared for the NFL draft as a player in 1984, Stephanie said he was told by San Francisco coach Bill Walsh that he would draft him if he was available. Rivera was available; Walsh didn’t draft him. It taught him another lesson: This is a business, and you must approach it like a job and expect others to do the same.

When Rivera told his players about his cancer diagnosis, they were comforted by his matter-of-fact tone. Stephanie said he had developed a plan. He told his players the same thing as his family. But with his family, it was tougher because of their experience with Mickey.

Rivera won’t sugarcoat his health situation or the challenges he faces in Washington. He said it might take a year for the offense to mesh. He knows it’s a rebuilding job.

His brother and his wife say the coaching change energized him. All of these obstacles — from internal situations to his health — become measures of his ability to achieve.

“I just think about what I have to do,” Rivera said, “and I keep going forward.”