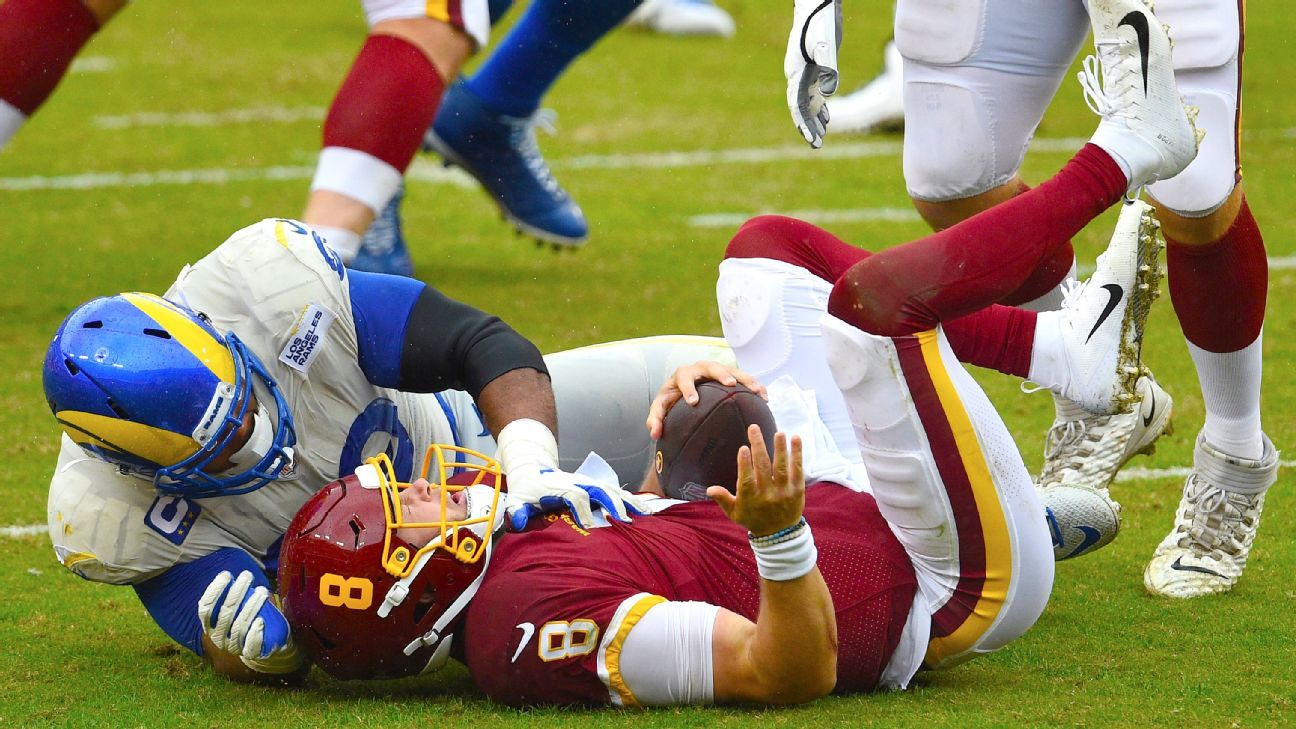 A steady rain and a third trip to the East Coast in the past four weeks could not slow the Los Angeles Rams on Sunday as they defeated the Washington Football Team 30-10 at FedEx Field.

The Rams improve to 4-1 and completed a sweep of the NFC East. They’re primed to begin division play next Sunday against the San Francisco 49ers (2-2) in prime time. The Rams are in second place in the NFC West behind the Seattle Seahawks (4-0), as they attempt to reclaim the division title after winning it two consecutive seasons before the 49ers won the division and conference last season.

QB Breakdown: Goff continues to roll this season and played catalyst to another fast start Sunday. Goff completed 21 of 30 passes for 209 yards and two touchdowns, with an interception. He also rushed for a 2-yard score. He went 7-of-7 on the Rams’ opening touchdown drive and has now completed 20 of 21 (95%) of his opening-drive passes this season. Goff kept the defense on its heels on that opening drive, utilizing two tight ends, two receivers and two running backs in the passing game.

Promising Trend: The Rams’ defense dominated at every level. Washington gained only 108 total yards behind quarterbacks Kyle Allen, who was knocked out of the game in the first half, and Alex Smith. Donald had four sacks, which tied a career best set in Week 7 of 2018. Linebacker Troy Reeder started in place of Micah Kiser who was inactive because of a groin injury, had three sacks.

The Rams had eight sacks as a team, with outside linebacker Jachai Polite getting the other one, the most in the McVay era. The Rams previously had seven sacks in 2018 against the 49ers and twice in 2017 versus the Seahawks and Arizona Cardinals. In the secondary, safety Jordan Fuller returned after missing two games because of a shoulder injury and had two pass deflections. Safeties John Johnson III and Taylor Rapp and cornerback Darious Williams also had pass deflections.

Eye-popping Next Gen Stat: Goff’s 56-yard touchdown pass to Woods in the second quarter was his first passing touchdown of 30-plus air yards since Week 4 of 2018.

Sources: WR Thomas out of MNF after altercation