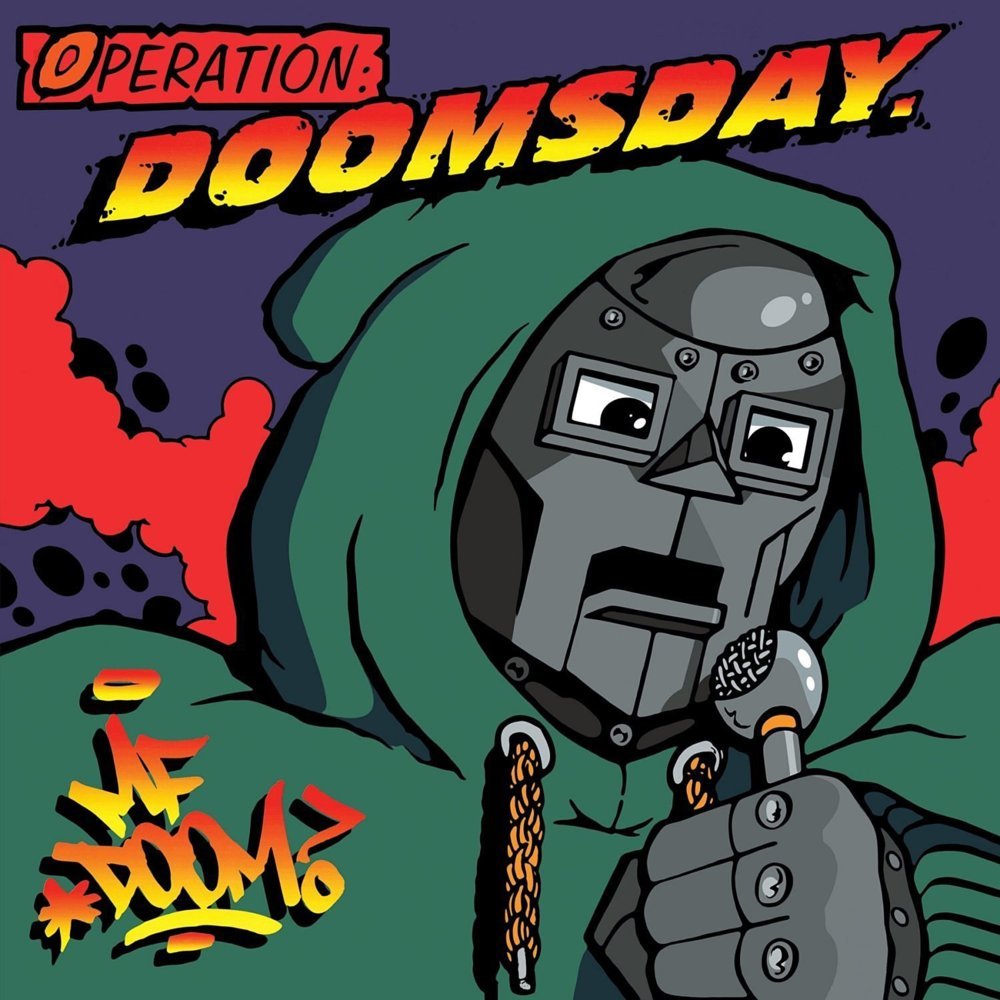 [Intro: Sade, MF DOOM]
Mic Check
When I was led to you
I knew you were the one for me
Come through, dig the sound
I swear the whole world could feel you MC
Crowd around

[Verse 1: MF DOOM]
I used to cop a lot, but never copped no drop
Hold mics like pony tails tight and bob a lot
Stop and stick around, come through and dig the sound
Of the fly brown 6-0 sicko psycho who throws his dick around
Bound to go three-plat, came to destroy rap
It’s a intricate plot of a b-boy strap
Femstat cats get kidnapped
Then release a statement to the press, let the rest know who did that
Metal Fist terrorists claim responsibility
Broken household name usually said in hostility
Um… what is MF? You silly
I’d like to take “Means to the End” for two milli’
“Doo-doo-doo-doo-doo!” That’s a audio daily double
Rappers need to fall off just to save me the trouble, yo
Watch your own back came in and go out alone, black
Stay in the zone—turn H2O to Cognac

[Hook: MF DOOM]
On Doomsday!, ever since the womb ‘til I’m back where my brother went, that’s what my tomb will say
Right above my government; Dumile
Either unmarked or engraved, hey, who’s to say?

[Verse 2: MF DOOM]
I wrote this one in B.C. D.C. O-section
If you don’t believe me, go get bagged and check then
Cell number 17, up under the top bunk
I say this not to be mean, wish bad luck or pop junk
Pop the trunk on Cee Cipher Punk, leave him left scraped
God forbid, if there ain’t no escape, blame MF tape
Definition “super-villain”: a killer who love children
One who is well-skilled in destruction, as well as building
While Sidney Sheldon teaches the trife to be trifer
I’m trading science fiction with my man the live lifer
A pied piper holler a rhyme, a dollar and a dime
Do his thing, ring around the white collar crime
Get out my face, askin’ ‘bout my case, need toothpaste
Fresher mint, monkey-style nigga get dentadent
And dope fiends still in they teens, shook niggas turn witness
Real mens mind their own business
That’s the difference between sissy-pissy rappers that’s double-dutch
How come I hold the microphone double-clutch
C.O.’s make rounds, never have ‘ox found
On shakedown, lock-down, wet dreams of Fox’ Brown

[Hook: MF DOOM]
On Doomsday!
Ever since the womb ‘til I’m back where my brother went
That’s what my tomb will say
Right above my government; Dumile
Either unmarked or engraved, hey, who’s to say?

[Bridge: MF DOOM]
Doomsday
Ever since the womb ‘til I’m back to the essence
Read it off the tomb
Either engraved or unmarked grave, who’s to say?

[Verse 3: MF DOOM]
Pass the mic like “Pass the peas like they used to say”
Some M-er F-ers don’t like how Sally walk
I’ll tell y’all fools it’s hella cool how ladies from Cali talk
Never let her interfere with the Yeti ghetto slang
Nicknames off nipplin’ tip of nipples metal fang. metal fang
Known amongst hoes for the bang-bang
Known amongst foes for flow without no talking orangutans
Only gin and Tang
Guzzled out a rusty tin can, me and this mic is like yin and yang
Clang! Crime don’t pay, listen, youth
It’s like me holding up the line at the kissing booth
I took her back to the truck, she was uncouth
Spittin’ all out the sunroof, through her missing tooth
But then she has a sexy voice, sound like Jazzy Joyce
So I turned it up faster than a speeding knife
Strong enough to please a wife
Able to drop today’s math in the 48 keys of life
Cut the crap far as rap
Touch the mic, get the same thing a Arab will do to you for stealing
What the Devil? He’s on another level
It’s a word! No, a name! MF – the Super-Villain!

[Outro: Pebbles the Invisible Girl & MF Doom]
When I
Doomsday
Check the sound
Right around was led to you
I knew you were the one for me
I swear the whole world could feel you MC