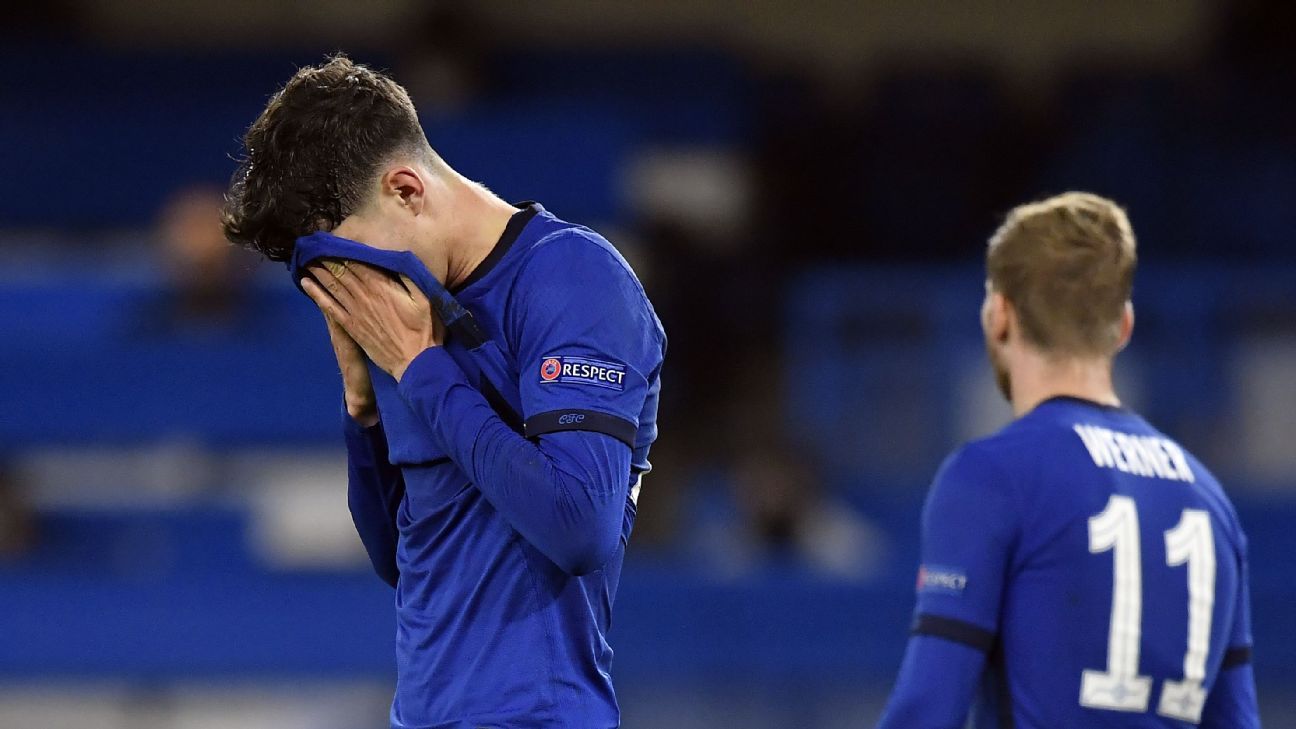 It took until 62 minutes into Chelsea‘s eighth game of the season but Frank Lampard finally got what he wanted.

Once Hakim Ziyech replaced Mason Mount just after the hour mark, the Blues had all six major summer signings together on the pitch for the first time. The concern will be, however, that despite the presence of Ziyech, Kai Havertz, Timo Werner, Ben Chilwell, Thiago Silva and Edouard Mendy, a group that combined cost £220million, Chelsea were unable to muster anything more than a 0-0 draw against Sevilla to kick off their Champions League campaign.

It would be ludicrously premature to judge the club’s investment based on their first, belated outing, especially given the truncated preparation and convoluted path to fitness many of that sextet have encountered. Lampard is right to assert this new group needs time to gel but how much damage will be done by the time they can be expected to hit full stride?

Sevilla are streetwise in European football, winning the Europa League four times in the past seven seasons, but Chelsea have conceded the initiative in Group E by dropping two points at home. Money alone cannot buy you savviness.

The Spaniards controlled this match at the beginning and the end without ever sustaining enough pressure to suggest they would score, something which ranks an achievement in itself given Chelsea’s recent defensive frailties. A rare clean sheet may constitute progress in that context but not in a wider sense for a team so lavishly assembled.

Lampard, of course, welcomed the calm after the calamity of recent matches — indeed, his first 0-0 as Chelsea manager — and it was at least a step forward from last year, when they lost the opening group stage match at home to Valencia and put themselves firmly on the back foot in the group.

“I think it is a positive result,” said Lampard. “We felt the feeling of losing the first game last season and the pressure it put us under to get through the group, which we did. So I understand the importance of the first game against quality opposition. It is a tough one and a clean sheet was a big deal for us.

“They have a really distinct way of playing which makes them hard to press and we matched them in many ways. Both teams worked each other out. It was one where I can be pleased with the side for getting a clean sheet. It was a big deal for us tonight.”

There were positive signs from the new recruits. Mendy marked his Champions League debut for Chelsea with an assured performance, clawing away Nemanja Gudelj‘s deflected header in the 18th-minute with a clarity of thought and sharpness of execution which Kepa Arrizabalaga has consistently lacked. Afterward, Lampard confirmed Mendy has shown enough in his three performances to establish himself as Chelsea’s number one.

“At the minute, yes [he is],” said Lampard. “I said when he came in he would be great for competition. We knew his qualities and he is showing them already so as it stands he is but that always remains something that is up for grabs.”

Ben Chilwell continues to look thoroughly at home on Chelsea’s left flank, bringing an assuredness in defence and a threat going forward. The England defender’s 48th-minute corner gave Kurt Zouma an excellent chance to break the deadlock and just over 10 minutes later, Chilwell almost managed the feat himself when meeting Reece James‘ cross with a firm header straight at Sevilla goalkeeper Bono.

Thiago Silva helped keep the Blues organised during lengthy spells of Sevilla possession while Havertz showed flashes of his quality, one marauding run which transitioned Chelsea into attack at lightning speed caught the eye.

But Werner was once again the most persistent threat, his movement of near-constant concern to an alarmed Sevilla rearguard. No doubt buoyed by scoring his first Premier League goals against Southampton last weekend, the 24-year-old was itching to add to his tally but in truth failed to receive sufficient service to do so.

And therein lies the rub. Werner had the longest preseason of any Chelsea signing given his decision to turn down the chance to play in the latter stages of this competition with Red Bull Leipzig to maximise his preparation time in west London, and it is showing.

The supporting cast need to step up. Christian Pulisic looked infinitely better operating off the left when afforded the opportunity and will soon get up to speed following his injury issues. But more will soon be required from Havertz and Ziyech to create the combinations to win games of fine margins like this. On a day when Chelsea recalled Petr Cech to their Premier League squad as emergency cover, Lampard won’t quite be reaching for Didier Drogba’s number just yet.

But expectations of any team that spends £220m increase significantly and while a night off from defensive woes feels a step forward, the combination with more attacking zeal exhibited by a team with a better balance than this must come before too long.

“For us, I’m not jumping down the line,” added Lampard. “I keep saying it: we are early in our season, we are a few games in and we are going to get better. It doesn’t matter what anyone else says, we are going step by step at the moment.”