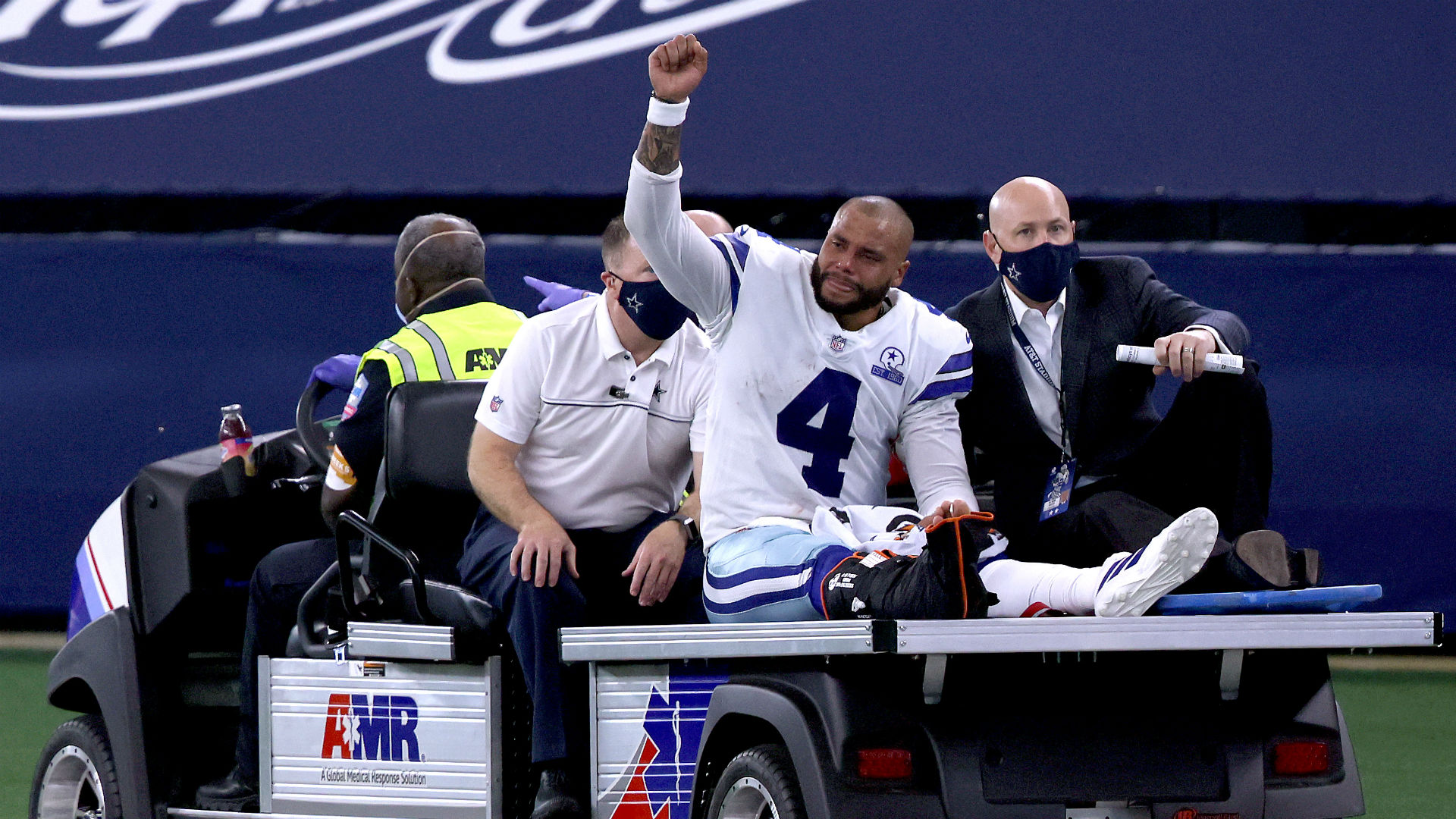 Dak Prescott’s season is expected to be over after he suffered a compound right ankle fracture and dislocation during the Cowboys’ Week 5 game against the Giants.

As Prescott scrambled in the third quarter, his right ankle was caught awkwardly underneath him, shifting his lower leg/ankle area at an unnatural angle. Andy Dalton took over as the Dallas quarterback after Prescott was carted off the field in an air cast with tears on his face. The Cowboys announced Prescott’s injury diagnosis Sunday evening.

How long will Dak Prescott be out?

The official diagnosis is a compound right ankle fracture and dislocation, according to the Cowboys. The nature of Prescott’s injury brings to mind recent injuries to quarterback Alex Smith or basketball player Gordon Hayward. Those were both season-ending injuries. Cowboys’ head coach Mike McCarthy confirmed to media that Prescott’s injury is expected to be season-ending.

Prescott’s chances of returning this season would likely depend on his injury not being a fracture, which is what it appeared to be. Even an ankle dislocation can take half a year to fully recover from. Prescott is playing under the franchise tag, meaning a season-ending injury where Prescott can’t show a return to health could impact his future contract negotiations. That won’t impact his return timetable, though.

What is Dak Prescott’s injury?

Prescott’s injury looked most visually similar to Hayward’s Oct. 2017 injury while playing for the Boston Celtics. That Hayward injury was eventually diagnosed as a dislocated ankle and fractured tibia. Hayward sustained that injury while landing awkwardly on his left leg, rather than Prescott’s leg being tucked underneath him during a tackle.

WARNING: The video below is graphic.

Prescott’s brother, Tad, posted a photo with Dak at the hospital. Tad’s caption read, in part, “God is good, and he’ll be back STRONGER than ever.”

Oct. 11 – Prescott leaves Week 5 against the Giants in the third quarter with an apparently serious right leg injury.

Oct. 11 (cont.) – Prescott has surgery on his right ankle to wash out the wound of the compound fracture and dislocation. Mike McCarthy says it’s expected to be a season-ending injury. The surgery went very well, per Schefter.

Oct. 11 – Prescott is taken to a Dallas-area hospital after being carted off the field against the Giants, per ESPN’s Adam Schefter. Schefter added that Prescott would have right-ankle surgery on this Sunday night.

Oct. 11 (cont.) – The Cowboys announced Prescott suffered a compound right ankle fracture and dislocation, and will undergo surgery to wash out the wound. Prescott is expected to miss the remainder of the season, head coach Mike McCarthy told media. Prescott’s surgery went very well, per Schefter.

Oct. 12 – Prescott has been told the recovery window is 4-6 months, according to NFL Network’s Jane Slater.