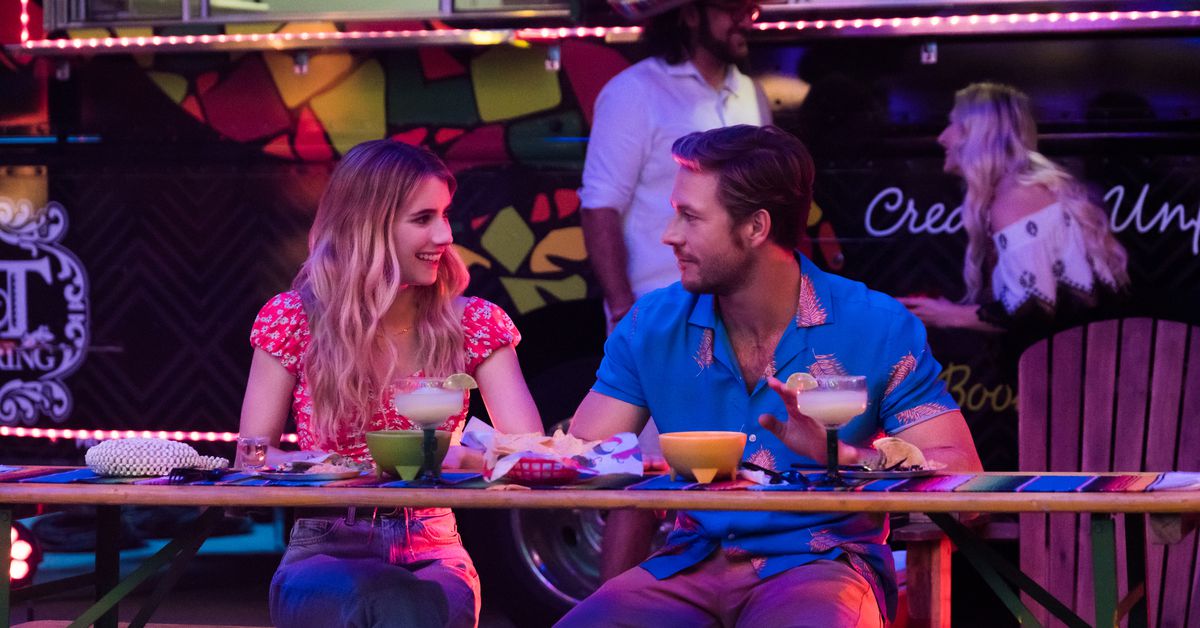 The new Netflix movie Holidate establishes some all-important vocabulary: A “holidate” is someone to spend any given holiday with, explicitly for the purpose of not being alone and preventing your family members from trying to set you up with someone else. To be clear, it’s not a friends-with-benefits situation. If anything, it’s closer to a rental-family service, except it’s a mutually beneficial arrangement rather than something that’s paid for. But while having a “holidate” is a fun idea, John Whitesell’s Holidate isn’t the kind of movie to bring home for the holidays.

Sloane (Emma Roberts) and Jackson (Luke Bracey) both hate the holidays. Sloane’s family won’t stop trying to introduce her to new men. Jackson, meanwhile, doesn’t have any family in the States, and finds meeting new people over the holidays stressful. When the two of them meet while trying to return gifts at the same store, they immediately bond over their mutual distaste for holidays, and land upon the solution of “holidates,” inspired by Sloane’s aunt Susan (Kristin Chenoweth), who always brings flings to family events. They plan to see each other at every holiday — Easter, Valentine’s Day, St. Patrick’s Day, etc. — and that will be that.

Or so they think. Holidate is a romantic comedy, and there are signs plastered everywhere indicating just where this platonic arrangement will lead. Early on in the film, Sloane even bemoans rom-coms that pretend that the leads won’t eventually get together. The scene is self-aware enough to be funny, but quickly undercut by how unaware the rest of the film seems.

The mindset that it’s particularly important to have a love interest on the holidays feels outdated in 2020, especially as the term “Friendsgiving,” referring to spending Thanksgiving with a group of friends rather than blood relations, has become so prevalent that it got its own movie. The characters’ views on romance are painfully outdated as well; even as Jackson and Sloane grow closer together, Jackson continues to argue the casually sexist view that all women become crazy during the holidays, and that it’s always the woman in any given heterosexual relationship who will demand commitment.

On top of that regressive attitude, Holidate falls in the bland no-man’s land between being sharp enough to appeal to adults (à la Bridesmaids) and tame enough to watch with the whole family. There are a few jokes that hinge on bodily functions (even a Bridesmaids-esque scene involving involuntary bowel movements), and a relatively high level of raunchiness that skews toward just being explicit rather than explicit and funny. The film never quite settles on a tone as it tries to mix its protagonists’ cynicism with its genre’s inherent cheer, and only Chenoweth, playing her character as kookily and dramatically as possible, seems to be having any fun.

By contrast, the predictability of the trajectory Sloane and Jackson are set on might be forgivable if Roberts and Bracey had palpable chemistry, but they never really mesh. Their snarky banter is fun — at a New Year’s party, they spend the night people-watching and making snide comments — but when it comes to romance, Tiffany Paulsen’s script veers into clunky territory. The mugging and overacting ramp up as the film progresses, and never gets any less tiresome. The environs never feel lived in, either, as exemplified by a video call that, while at least accurate in terms of looking like someone is actually holding the phone, slaps the videos of the callers on top of a dull grey background that looks like it was pulled from a meme generator rather than a feature film.

Ultimately, Holidate just isn’t memorable, and it’s a little too blue to be safe as background noise for real-life family gatherings. Though the central idea is fun, everything that’s been built around it feels rote, if not totally outdated. By comparison with Netflix’s other upcoming holiday fare, which includes Kurt Russell’s return as Hot Santa and a movie with three Vanessa Hudgenses, Holidate fails to make a case for itself as a new Christmas classic.

Holidate is streaming on Netflix now.