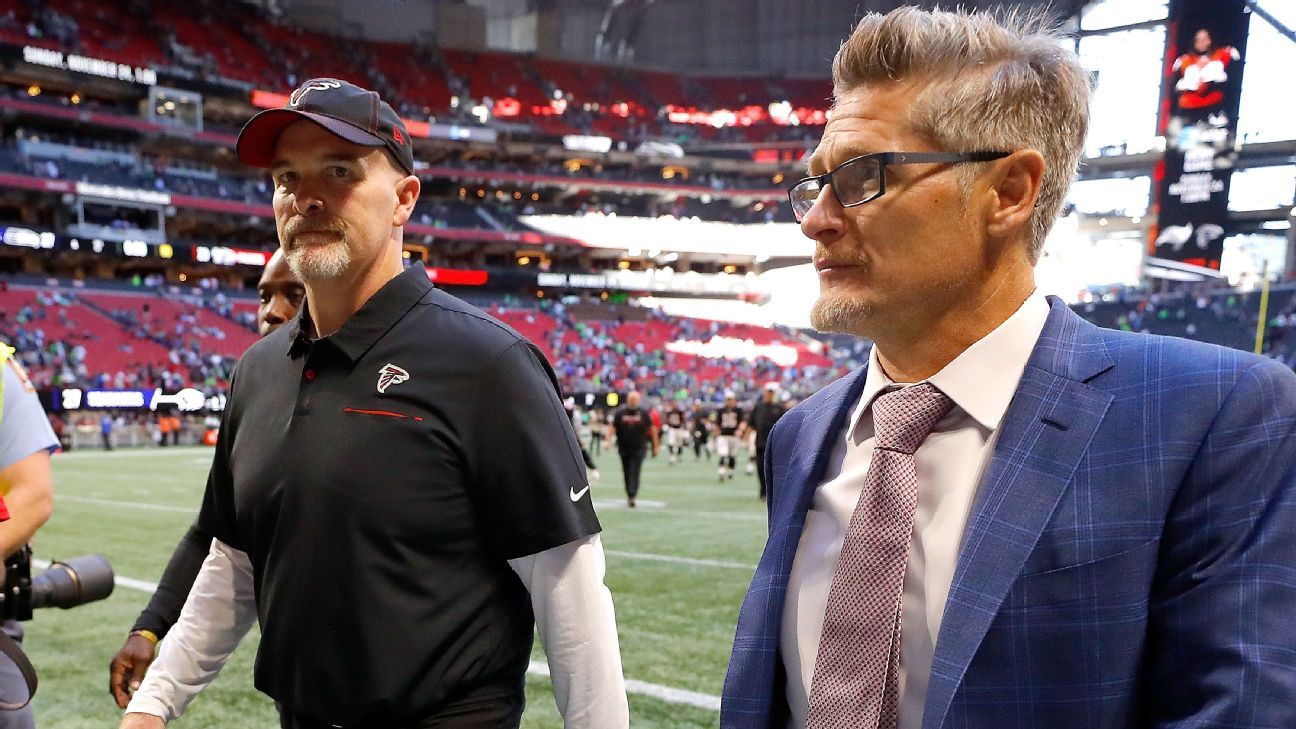 Atlanta Falcons coach Dan Quinn and general manager Thomas Dimitroff, who saw their team start 0-5 for the first time since 1997 after a Sunday loss to the Carolina Panthers, have been fired.

Team president Rich McKay will assume day-to-day oversight of football operations in the interim, according to a statement Sunday from the Falcons. An interim head coach is expected to be announced Monday.

“Decisions like these are very difficult, but the previous two seasons and start to this one have been especially hard for me because of the deep love, admiration and respect I and my family have for Dan, Thomas and their families,” Falcons owner Arthur Blank said in a statement. “For many years, they have represented me, our team, organization and Atlanta with class, commitment and all the passion you would want in the leaders of the team.

“But as everyone knows, this is a results business and I owe it to our fans to put the best product we can on the field. We have poured every resource possible into winning and will continue to do so, but the results of late do not meet our standard or what I’ve promised our fans. Therefore, we will install new coaching and personnel leadership of the Atlanta Falcons at the appropriate time.”

Quinn, 50, was in his sixth season and finished his time in Atlanta with a 43-42 record. He posted back-to-back 7-9 seasons heading into this year after taking his team to the Super Bowl during the 2016 campaign with Kyle Shanahan as offensive coordinator.

Quinn’s playoff record was 3-2, including a crushing 34-28 overtime loss to the New England Patriots in Super Bowl LI after holding a 28-3 third-quarter lead. He went 24-29 in the three seasons since the Super Bowl appearance.

Dimitroff joined the Falcons in 2008 and has played a key role in a period of success unmatched in Falcons history. Since his arrival the Falcons have won 109 games, been to the playoffs six times and won the NFC championship in 2016.

His drafts have landed franchise cornerstones Matt Ryan, Julio Jones, Jake Matthews, Grady Jarrett, Deion Jones and numerous others who have helped the Falcons become one of the winningest teams in the NFL over the past 10 seasons. Since 2008, the Falcons are eighth in the NFL and fourth in the NFC in wins.

But Dimitroff had draft failures as well. He and Quinn selected pass-rusher Vic Beasley eighth overall in 2015, and Beasley was a one-hit wonder whom they let walk to Tennessee in free agency. Dimitroff’s first pick in 2012, offensive lineman Peter Konz, never panned out. Cornerbacks Desmond Trufant and Robert Alford, the first- and second-round picks in 2013, are no longer with the team. And the jury remains out on first-rounders Keanu Neal and Takk McKinley, both of whom are in the final year of their contracts and have dealt with injury issues.

When asked after Sunday’s loss if he would understand if Blank makes a change, Quinn said: “It’s the furthest thing from my mind.”

“It’s his job to evaluate; for me, it’s coaching. And I’ll work as hard as I can to align our team to play like we’re capable of playing.”

Quinn could not carry the momentum from the second half of 2019 into this season. The Falcons opened this season by dropping games to Seattle, Dallas and Chicago, the latter two involving blown fourth-quarter leads of 15-plus points. The Falcons became the first team in NFL history to lose twice in one season while holding a 15-plus-point lead in the fourth quarter, according to research by the Elias Sports Bureau.

“Our finish in 2019 earned an opportunity to show that momentum could be continued and built upon, but that has clearly not happened,” Blank said. “And overall, the last 3-plus seasons have fallen short of my commitment to Atlanta and to our fans everywhere. I want them all to know that my commitment to winning has not wavered and I will continue to provide every resource possible to that end.”

A big part of the Falcons’ Super Bowl run was the offensive genius of Shanahan, now coach of the San Francisco 49ers, and the Falcons couldn’t duplicate that offensive success under Steve Sarkisian, who was fired after two seasons, or Koetter. Both Sarkisian and Koetter were asked to maintain the same principles from Shanahan’s high-powered attack, which led the league at 33.8 points per game during the 2016 season.

Quinn and Dimitroff were awarded three-year extensions in July of 2018, extensions that were supposed to run through 2022. Quinn had a 29-19 record at the time of the extension.