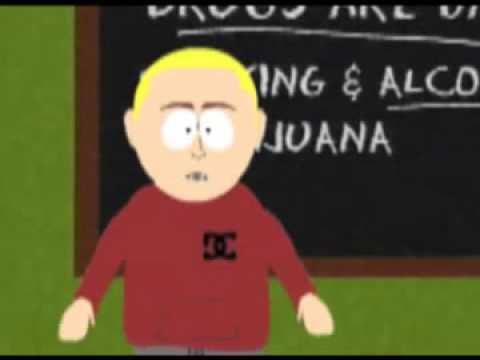 [Verse 1]
Hi there, little boys and girls! (Fuck you!)
Today we’re gonna learn how to poison squirrels
But first, I’d like you to meet my friend Bob (Huh?)
Say hi, Bob (“Hi, Bob!”)
Bob’s 30 and still lives with his mom
And he don’t got a job ’cause Bob sits at home and smokes pot
But his twelve-year-old brother looks up to him an awful lot
And Bob likes to hang out at the local waffle spot
And wait in the parking lot for waitresses off the clock
When it’s late and the lot gets dark and fake like he walks his dog
Drag ’em in the woods and go straight to the chopping blocks (Ahh!)
And even if they escaped and they got the cops
The ladies would all be so afraid, they would drop the charge
‘Til one night Mrs. Stacey went off the job
When she felt someone grab her whole face and said not to talk
But Stacey knew it was Bob and said, “Knock it off!”
But Bob wouldn’t knock it off, ’cause he’s crazy and off his rocker
Crazier than Slim Shady is off the vodka
You couldn’t even take him to Dre’s to get Bob a doctor
He grabbed Stace’ by the legs as he chopped it off her
And dropped her off in the lake for the cops to find her
But ever since the day Stacey went off to wander
They never found her, and Bob still hangs at the waffle diner
And that’s the story of Bob and his marijuana
And what it might do to you
So see if the squirrels want it—it’s bad for you

[Verse 2]
My penis is the size of a peanut, have you seen it?
Fuck, no! You ain’t seen it! It’s the size of a peanut (Huh?)
Speakin’ of peanuts, you know what else is bad for squirrels?
Ecstasy—it’s the worst drug in the world
If someone ever offers it to you, don’t do it
Kids, two hits’ll probably drain all your spinal fluid
And spinal fluid is final, you won’t get it back
So don’t get attached, or it’ll attack every bone in your back
Meet Zach: twenty-one years old
After hangin’ out with some friends at a frat party, he gets bold
And decides to try five when he’s bribed by five guys
And the peer pressure will win every time you try to fight it
Suddenly, he starts to convulse
And his pulse goes into hyperdrive
And his eyes roll back in his skull (Blblblblblb)
His back starts to look like the McDonald’s Arches
He’s on Donald’s carpet, layin’ horizontal, barfin’ (Bleh)
And everyone in the apartment starts laughin’ at him
“Hey Adam, Zach is a jackass, look at him!”
‘Cause they took it too, so they think it’s funny
So they’re laughing at basically nothing
Except maybe wasting their money
Meanwhile, Zach’s in a coma, the action is over
And his back and his shoulders hunched up like he’s practicin’ yoga
And that’s the story of Zach, the ecstasy maniac
So don’t even feed that to squirrels, class, ’cause it’s bad for you

[Verse 3]
And last but not least, one of the most humongous
Problems among young people today is fungus
It grows from cow manure; they pick it out, wipe it off, bag it up
And you put it right in your mouth and chew it
Yum-yum! Then you start to see some dumb stuff
And everything slows down when you eat some of ’em
And sometimes, you see things that aren’t there (Like what?)
Like fat women in G-strings with orange hair
(Mr. Shady, what’s a G-string?) It’s yarn, Claire
Women stick ’em up their behinds, go out and wear ’em (Huh?)
And if you swallow too much of the magic mushrooms
Whoops, did I say ‘magic mushrooms?’ I meant fungus
Your tongue gets all swoll up like a cow’s tongue
(How come?) ‘Cause it comes from a cow’s dung (Gross!)
See, drugs are bad, it’s a common fact
But your mom and dad know that’s all that I’m good at (Oh!)
But don’t be me, ’cause if you grow up and you go and OD
They’re gonna come for me, and I’ma have to grow a goatee
And get a disguise and hide, ’cause it’ll be my fault
So don’t do drugs, and do exactly as I don’t, ’cause I’m bad for you

[Chorus]
See, children, drugs are bad (Uh-huh)
And if you don’t believe me, ask your dad (Put that down!)
And if you don’t believe him, ask your mom (You can ask)
She’ll tell you how she does ’em all the time (And she will)
So kids, say no to drugs (Say no)
So you don’t act like everyone else does (Like I do)
And there’s really nothin’ else to say (That’s right)
Drugs are just bad, mmkay?

[Outro]
Come on, children, clap along! (Shut up!)
Sing along, children! (Suck my motherfuckin’ dick!)
Come on, clap along
Drugs are just bad, drugs are just bad (South Park is gonna sue me!)
So don’t do drugs! (Kiss my motherfuckin’ ass!)
So there’ll be more for me (Hippie! Goddamn it!)
(Mushrooms killed Kenny!)
(Uh, the fart button’s on) (*fart*) (Ew, ahh!)
La la la (So fucked up right now)