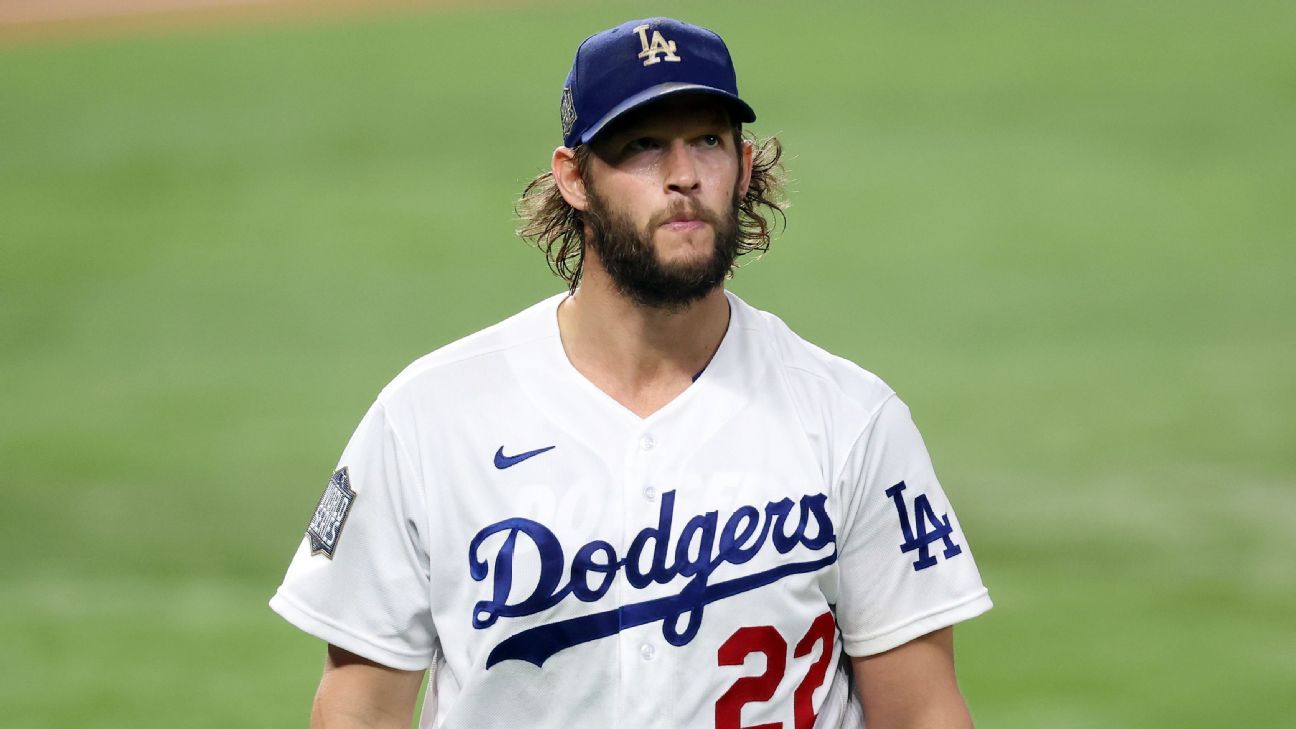 Clayton Kershaw can pitch just fine in October, thank you very much — and after his performance in Game 1 of the World Series on Tuesday, the Los Angeles Dodgers are within three wins of their first championship in 32 years.

Kershaw carved through the Tampa Bay Rays’ lineup, retiring 17 of the final 18 batters he faced and leading the Dodgers to an 8-3 victory in Game 1 of the 116th World Series.

Over six innings, Kershaw allowed two hits and one walk while striking out eight. His lone blemish was a Kevin Kiermaier home run that wound up being of little consequence, as the Dodgers’ offense spent the middle innings tagging Rays pitchers with a complement of long balls and small ball.

“Kershaw was dealing,” Rays manager Kevin Cash said. “You see why he’s going to the Hall of Fame one day.”

A crowd of 11,388 stuffed the concourses at Globe Life Field with Dodgers jerseys, cheered the Dodgers’ big moments and unleashed vociferous boos on a check-swing strike call. The prospect of a partisan crowd for the remainder of the neutral-site series gives the Rays another obstacle — as if beating the team that went 43-17 in the regular season weren’t enough.

When Kershaw is pitching as he did Tuesday, the task becomes even more Herculean.

“I mean, if we play at our best, no,” Kershaw said after the game when asked if the Dodgers are beatable. “I think we are the best team, and I think our clubhouse believes that. So there’s gonna be certain times where we get beat, and that happens. But as a collective group, if everybody’s doing what they’re supposed to be doing and playing the way they’re supposed to, I don’t see how that can happen.”

Rays batters swung at 38 of Kershaw’s 78 pitches and whiffed on 19. All eight of his punchouts were of the swinging variety, with the last seven on sliders, and they moved Kershaw into second place on the all-time postseason strikeout list, with 201. Should the series get to a fifth game, Kershaw is likely to pass the leader, the Houston Astros’ Justin Verlander.

Kershaw pitched into the seventh inning in 13 previous postseason games. He allowed opponents to score in more than half of them — 18 runs altogether.

Roberts’ decision was followed by the Rays’ scoring a pair of seventh-inning runs and chipping away at Los Angeles’ lead, but by that point, the Dodgers had flexed their offensive muscles in impressive fashion.

Cody Bellinger, who hit the go-ahead home run in the Dodgers’ Game 7 victory over the Atlanta Braves in the National League Championship Series, blasted a two-run homer off Tampa Bay starter Tyler Glasnow in the fourth inning to break a scoreless tie. Rather than perform a forearm-bash celebration that dislocated his shoulder in the NLCS win, Bellinger executed a light foot-tap with teammate Max Muncy.

“I think I’ll continue to do that,” Bellinger said with a laugh. “Maybe my whole career. Who knows?”

As much as the Dodgers love the home run, their ability to play small ball gave them their biggest inning.

Back-to-back walks by Glasnow to begin the fifth inning were followed by Mookie Betts and Corey Seager executing a double steal. Betts scored on a Muncy fielder’s choice, Seager scored on a Will Smith single, Muncy on a Chris Taylor single and Smith on a Kike Hernandez single. Just like that, the Dodgers were ahead 6-1.

“That’s just another element that Mookie brings,” Roberts said. “He does a lot of studying to be able to create stress. And whether it’s stealing a base or just being on base to make the pitcher speed up or not execute a pitch, he creates tension, and he’s just a heckuva ballplayer.”

The Dodgers piled on the next inning, with a Betts leadoff home run and back-to-back doubles from Justin Turner and Muncy. The favorites since the beginning of the original season — as well as the shortened one — are a quarter of the way to their first World Series title since 1988.

“Tonight, they outplayed us,” Kiermaier said. “They had big bats in crucial times. We had a tough task of getting momentum going for us. Kershaw threw the ball great, very deceptive up there, threw us off balance and not a whole lot of cold, hard contact. And he did a great job limiting the damage and keeping the bats very quiet.”

For months, as the coronavirus pandemic changed the world, the prospect of Major League Baseball’s staging a season, let alone the World Series, looked grim. The league and players fought over salaries. MLB commissioner Rob Manfred threatened to cancel the season. The league imposed on the players a 60-game slate, and within the first two weeks, a pair of teams suffered COVID-19 outbreaks.

Since then, apart from the odd case, MLB has operated with remarkable efficacy. Playoff teams spent the last week of the season staying in hotels and, aside from travel to and from the stadium and from city to city if they advanced, they haven’t left. No player on an active roster has tested positive for COVID-19 since Aug. 28, according to the league.

Game 2 is scheduled for Wednesday, with the Rays’ Blake Snell facing Los Angeles’ Tony Gonsolin. After an off day Thursday, Tampa Bay’s Charlie Morton will start against Dodgers ace Walker Buehler in Game 3.