Dolphins’ decision to start Tua Tagovailoa over Ryan Fitzpatrick is right, but timing is wrong 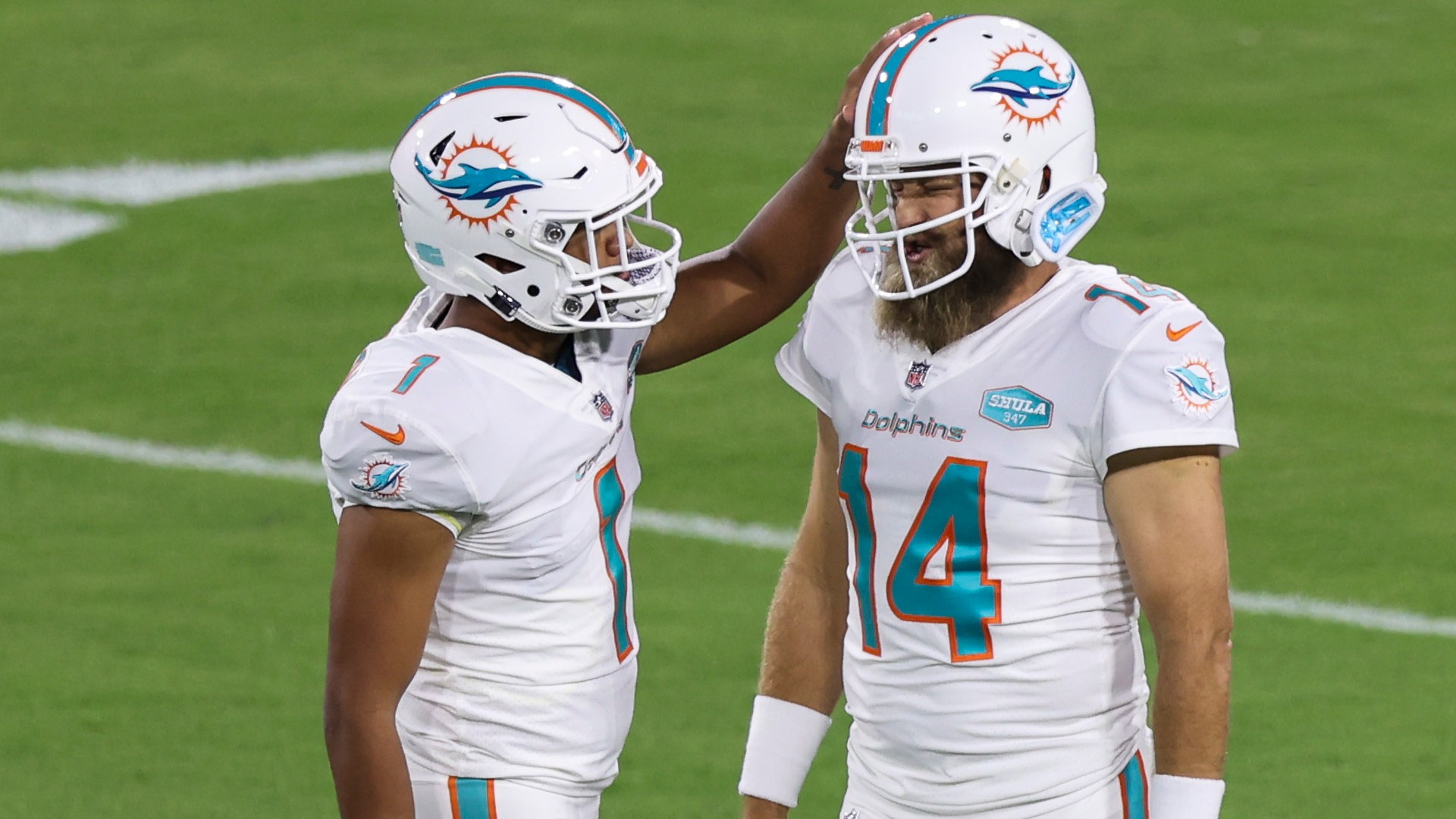 The Dolphins are 3-3 going into a bye week, having won three of their past four games after an 0-2 start, thanks much to the play of 37-year-old bridge starting quarterback Ryan Fitzpatrick. That didn’t keep them from making the sudden decision to start rookie first-round pick Tua Tagovailoa for the rest of the 2020 NFL season.

With that record, a half-game better than the Patriots for second place in the AFC East, they are in surprise contention for a playoff spot. With seven postseason slots now available in the AFC, the Dolphins current stand as the No. 9 seed, a little behind the Browns and the Raiders.

Miami is winning because of Fitzpatrick, not despite of him, even though the running game and defense have provided big boosts of late. He’s executing Chan Gailey’s familiar offense at a high level, using all his wide receivers, tight ends and backs well. He’s rating 95.0, 17th in the league, and his ESPN total QBR at 79.6, which also includes his underrated running, has him at No. 7.

The Dolphins probably didn’t realistically expect to be in reasonable playoff contention through six weeks. When Fitzpatrick got off to a slow start and the team lost the first two, the writing seemed to be on the wall.

But with starting Tagovailoa, it appears that Miami was scripted with its midseason plan. It is clear that the team meant to turn from Fitzpatrick to the rookie during its bye week no matter what, assuming Tagovailoa was fully recovered from his hip injury at Alabama about a year later.

Who knew that Tagovailoa making his debut in mopup duty late in Week 6’s 24-0 home shutout of the Jets would lead immediately to this? Even though Tagovailoa seeing an NFL field for the first time was a emotional moment, the Dolphins made the call more with their heads than their hearts.

Really, their heart would say stick with Fitzpatrick. He can be a roller coaster with his production and efficiency, which has been proved in his stints, starter or backup, with eight teams over 16 seasons. But there’s no doubt that he’s been an important fiery leader for the team, rejuvenated in his reunion with Gailey.

The Dolphins may be a playoff long-shot at .500 based on the 0-2 start, but mathematics say they were alive and well with Fitzmagic. No matter whether you don’t think a team is truly postseason-caliber, it is the job of Brian Flores, like every coach, to put his team and players in position to win as many games as possible.

With Tagovailoa’s health being a concern yet not wanting to totally redshirt him to lose a valuable season of development, the Dolphins’ coaching staff was put in a tough spot. Really, if this was the plan after only six weeks, they should have just rolled with Tagovailoa, lumps and all, from the get-go.

Instead of waiting until things went truly south with Fitzpatrick, the Dolphins put their season in limbo. Sure, from the outside it’s easy to say that they are rebuilding and they weren’t going to win much of anything, anyway. But then Fitzpatrick gave them juice and some hope, stamped by his winning performance against the reigning NFC champions in San Francisco in Week 5.

Look, the Dolphins would be significant underdogs against the Rams in Week 8 with Fitzpatrick, too. Now you’re throwing Tagovailoa into a starting debut that could rattle a young QB, facing Aaron Donald, Jalen Ramsey and a dangerous pass defense. Then come the Cardinals on the road, not long after Arizona finally raised its defensive playmaking against Dallas on Monday night. Then come the Chargers to Miami, with Joey Bosa and their strong secondary.

From another perspective, why not wait until Fitzpatrick goes back into a slump against those three defenses and start Tagoavoila when the Dolphins are back under .500? The Dolphins’ opponents in Weeks 11 to 13 are the Broncos, Jets again and Bengals, opposite No. 1 overall pick Joe Burrow. If not starting Tagovailoa in Week 1, that would have seemed to align as the best stretch to officially hand over the keys.

Knowing how to handle a talented rookie first-round QB is critical and delicate. The teams that do it right and build up and support that QB’s confidence with early success set themselves up well for his second year. The Chiefs, Ravens and Texans played it right in waiting just enough. The Bengals and Chargers nailed down the timing with when to play Burrow and Justin Herbert, sooner rather than later.

In relation to all those recent situations, with a veteran QB playing well ahead of the rookie, the Dolphins had a tough call to make on Fitzpatrick vs. Tagovailoa. Despite better judgment, let’s hope they decided to wait in the right way.