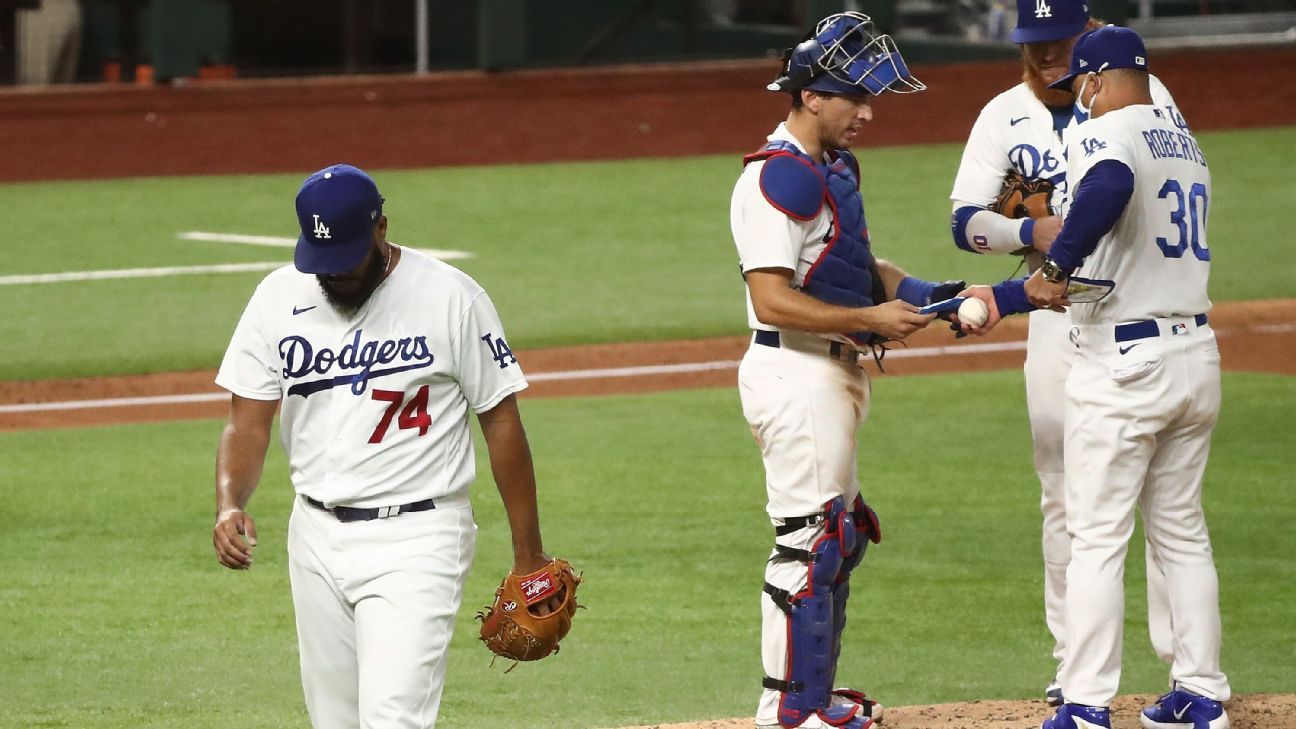 For years, the Los Angeles Dodgers knew that if they could just get a lead to the ninth inning, Kenley Jansen was waiting to jog in from the bullpen to finish things off. After Jansen struggled through yet another appearance on Wednesday, the formula for manager Dave Roberts is no longer so simple.

Jansen entered Game 2 of the National League Division Series to get the last three outs against the San Diego Padres with the Dodgers leading 6-3. Los Angeles managed to hang on for a 6-5 win, but it was Joe Kelly, not Jansen, who earned the save.

Jansen started by striking out San Diego outfielder Wil Myers with a fastball, but then he gave up a sharp single to Jake Cronenworth and an RBI double to Mitch Moreland, which trimmed the Dodgers’ lead to two runs. Austin Nola then fouled out, but a Trent Grisham single plated Moreland and brought Roberts to the mound to pull his longtime closer.

When asked if Jansen would continue to close games, Roberts said, “I’m gonna keep thinking through it. I thought there were some good throws in there.”

“There wasn’t a conversation,” Roberts said. “I chose at that point and time to go to Joe. My love and respect for [Jansen] certainly hasn’t changed, and he feels terrible. He wants to be the guy, and he’s proven it time and time again. But I know he’s thrilled we won a ball game, a big ball game. And that was kind of it.”

Kelly proceeded to walk Fernando Tatis Jr. and Manny Machado, just missing on several close pitches, before getting Eric Hosmer on a game-ending groundout to second base. With the win, the Dodgers grabbed a 2-0 lead in the best-of-five series, with Game 3 set for Thursday.

“Came up in a big situation, and Joe made some great pitches,” Hosmer said. “You’ve got to tip your cap sometimes. Stinks you’ve got to do that.”

Clayton Kershaw, who got the win Wednesday night after allowing three earned runs in six innings, said there was “never a doubt” in the ninth.

“That’s how Joe Kelly rolls,” Kershaw said. “Joe likes to make it interesting for us.”

Jansen has been the Dodgers’ primary closer since 2012 but has shown signs of decline the past couple of seasons. In 2019, he saved 33 games but posted a career-worst 3.71 ERA. This season, Jansen started strong but gave up seven runs in back-to-back outings in September, casting his reliability for the playoffs into doubt even while he finished the season with six straight scoreless outings.

Jansen was averaging 93-94 mph earlier this season, but rarely got above 90 mph on his 30 pitches (seven fastballs and 23 cutters) Wednesday night. There were 11 pitches of at least 90 mph, and only three above 92 mph.

His performance Wednesday did not help his case — or at the very least, it gave Roberts much to think about.

“It was a lot for him: 30 pitches to get two outs,” Robert said. “I know that he’s disappointed as well.”

Star Wars: Squadrons Dev Has No Plans for More Content