Djokovic vs. Nadal is the French Open men’s final we need 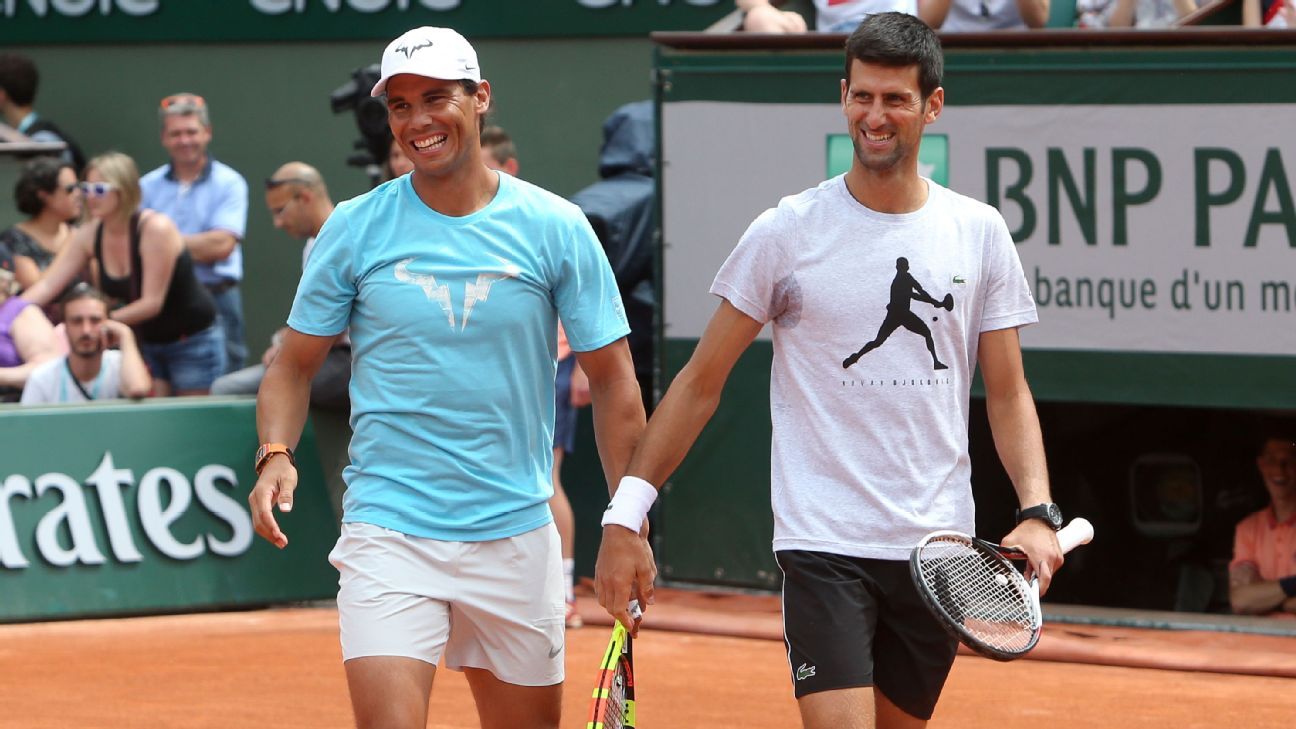 Another day, another record for Rafael Nadal.

On Sunday, the 34-year-old three-time defending French Open champion will compete in his 13th final at Roland Garros, taking sole possession of the record for most appearances in a final at one major. Nadal, ranked and seeded No. 2 in Paris, had been tied with Roger Federer, who has played in 12 Wimbledon finals. But where Federer is 8-4 in those finals, Nadal is a perfect 12-0 at Roland Garros.

Across the net: Novak Djokovic, 33, ranked No. 1 and playing in his fifth final on the red dirt in Paris. He has won only once, thanks mostly to Nadal’s proficiency, but Djokovic has been the most successful male player for almost a decade. He enters this match with a 36-1 record in 2020, the lone loss a mid-match default issued at the US Open.

Nadal leads the series at Roland Garros 6-1. Djokovic crafted that lone win the last time they met in Court Philippe Chatrier in the 2015 quarterfinals. Here are five key questions about the upcoming match.

What does Nadal need to do to win?

Nadal could start by remembering what he did against Diego Schwartzman in a semifinal match that appeared to be a land mine in his path only to turn into a triumph — and a handy blueprint for the final.

Like Djokovic, Schwartzman is a superb defender playing some of the best tennis of his career — as demonstrated by his stunning win over Nadal in the quarterfinals of the Italian Open. That win brought Nadal’s inadequate, post-COVID-19 lockdown preparation for the French Open to a grinding halt after just three matches.

But Nadal got a great infusion of confidence from his bounce-back straight-sets win over Schwartzman. The overpowering win, coupled with Nadal’s five previous matches in Paris — all straight-sets wins — flipped the script on the “seasoning” issue.

Nadal is not rusty; he’s fresh.

Against Schwartzman, Nadal put 69% of his first serves into play, a critical component in taking control of the rallies. He will need to do that against Djokovic.

Nadal also returned aggressively and won an excellent 62% of Schwartzman’s second-serve points — far better than the 48% he logged in their Rome match. Djokovic has a bigger serve than Schwartzman, but the slow conditions suggest that Nadal might be able to return it with intent.

Nadal made one significant adjustment due to the lower bounce of the ball in Paris these weeks. He played from much closer to the baseline than usual on the clay and compensated for the territory he gave up by taking angles away.

What does Djokovic need to do to win?

“He [Djokovic] goes through these periods when he looks totally out of it,” ESPN analyst Patrick McEnroe said. “I don’t know if it’s real or just in his head. Then he needs to get himself going again ”

One of those lapses enabled Stefanos Tsitsipas to fend off a third-set match point and force Djokovic to go the five-set distance in the semis.

Djokovic and Nadal run neck and neck as the top two returners in the men’s game, but the quality of Djokovic’s return will be more important because Nadal is the more aggressive player. Nadal gets great mileage out of the “serve-plus-one” tactic, whereby he serves, steps well into the court and wallops a massive forehand off the return. At his best, Djokovic could keep Nadal from executing that strategy.

As well, Djokovic has turned the drop shot into a go-to stroke on the slow, damp, low-bounce clay. It has worked so well for him that he said a few days ago, “I love the drop shot, but maybe too much.”

Nadal has excellent speed, but if Djokovic can maneuver him off the court with consistency, the dropper could be the money shot in the match.

How is this different from their previous matches?

The main thing for Djokovic is that he knows he can beat Nadal on clay at Roland Garros, a claim that can be made by only one other man, Robin Soderling (Nadal is 99-2 for his career at Roland Garros). Djokovic pulled off that feat in the quarterfinals in 2015. Oddly, it’s the last time they met in Paris.

That one, like most of their six previous matches all won by Nadal, was played in early June, usually under conditions that enabled Nadal to pound his way through Djokovic’s best in-game defenses. As ESPN analyst Jason Goodall put it, “Nadal [typically] likes to dictate play and dominate points, forcing opponents into errors or force them to take too many undue risks.”

Djokovic’s solution to that in 2015 was to use all the tools at his disposal instead of falling into endless rallying.

“I tried to mix up the pace,” he said after that landmark win. “I got to the net, [hit] drop shots, high balls, fast balls, always something different.”

Although Djokovic said he would take inspiration from that match and implement some of the strategies that proved successful, the conditions might not offer him as many options. Besides, Nadal is a much different player than in that last meeting. In 2015, Nadal was in the midst of the only serious slump of his career. He was down to No. 7 in the rankings at Roland Garros (hence the quarterfinal meeting), and would ultimately fall as far as No. 10.

Look for both men to play with more variety and perhaps more risk than usual. Both have more weapons and tactics at their disposal now than in many of their previous battles. They are older, with mature games and a veteran grasp of tactics.

Whom do the conditions favor?

Before the tournament started, the challenges the cool, wet conditions would pose for Nadal were a main topic of conversation. Yet here we are, with Nadal having powered through the tournament without losing a set.

No, the ball doesn’t bounce as high as it does on sunny, dry days. But the strategies and tactics that worked for Nadal in the full sunshine of June work in October as well. He puts unrelenting pressure on an opponent, wears down resistance and knows how to win crucial points. His aggressive mindset is supported by a foundation of excellent defense.

Djokovic might find the lower bounce to his taste, but the slowness of the court will make it more difficult for him to execute those sometimes devastating transitions from defense to offense that have become something of a trademark for him on faster courts. So unless Djokovic can find a way to disrupt the rhythm of rallies, the match is destined to be dominated by the long, punishing rallies that are so emblematic of clay-court tennis.

“I don’t care [about the conditions],” McEnroe said. “Rafa is still the greatest clay-court player of all time.”

Who has the mental edge?

Nadal trails Federer by just one Grand Slam singles title (20-19) on the all-time list for men. He has done a great job keeping the theme in the background. For years now, Nadal has consistently and credibly said that he’s not hunting the record, although he won’t complain if it falls in his lap.

In stark contrast, Djokovic has repeatedly announced his intention to shatter that record, among others. He has put himself under a lot more pressure to perform, and that could have an impact Sunday because this could be a pivotal moment in the great chase.

Djokovic has 17 major titles, and he’s still the youngest of the Big Three. But he’s at an age now when the titles become harder to lock down and the body is less resilient. Djokovic also knows he squandered an excellent opportunity when he was defaulted during his fourth-round US Open match.

The thoughtless action that resulted in Djokovic’s default (he smacked a ball in anger after losing a point and inadvertently struck a line judge) has been his most egregious display of emotion, but he has indulged in a few others. They suggest impatience and a slight lack of self-control. It’s enough, though, to bend a W into an L.

“Will Djokovic get frustrated with something or someone?” Goodall asked. “That can happen, and when it does he can very quickly find a very dark place mentally.”

Nadal, by contrast, is legendary for treating every point as if it were an entire match in and of itself. The real reason he takes so long between points might be that he’s wiping the slate clean. That kind of self-discipline and emotional consistency gives Nadal an edge in the mental game and leaves Djokovic with yet one more factor to reckon with on Sunday.