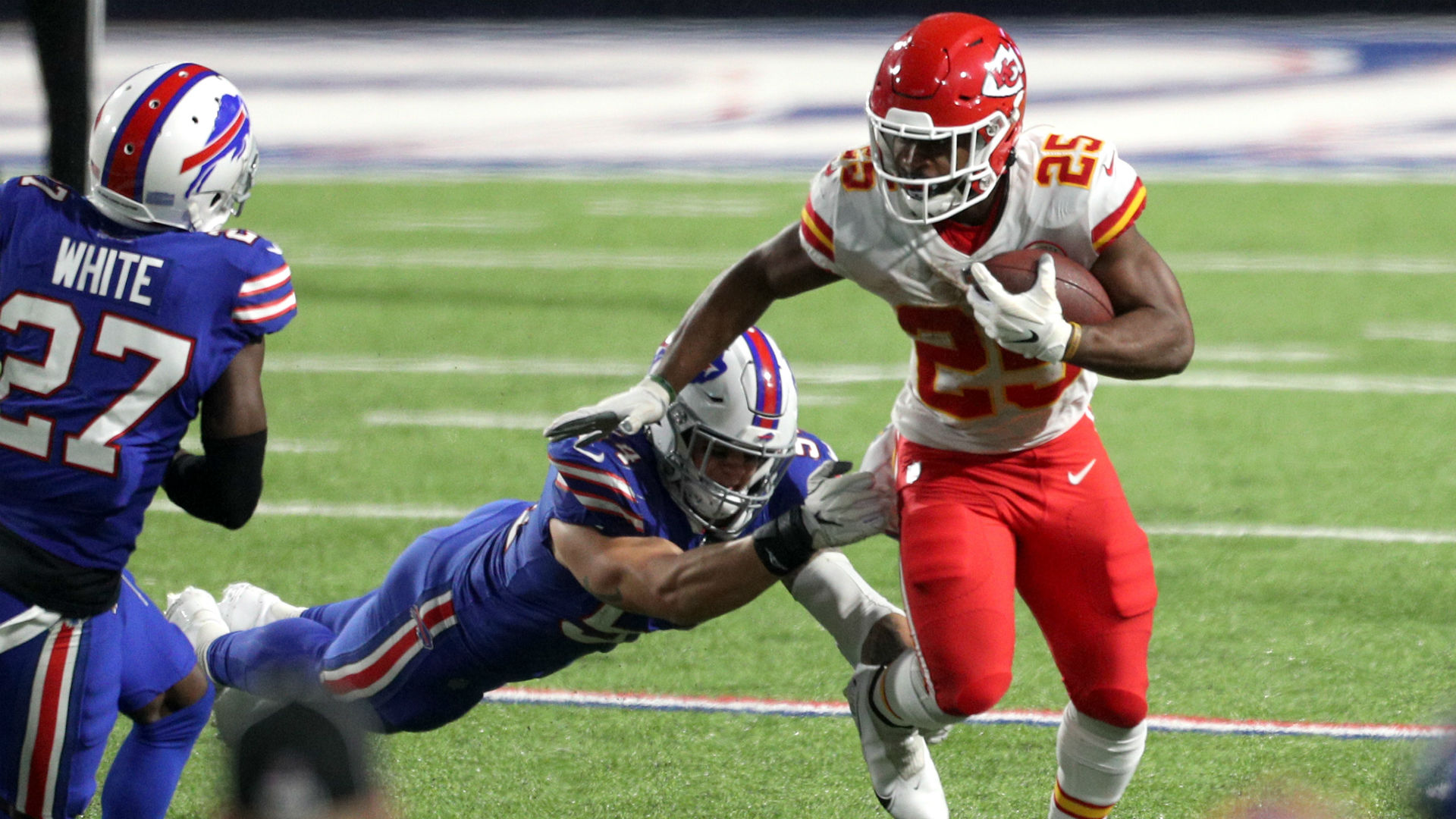 A lot of people probably were expecting the Chiefs to dominate their Monday evening matchup with the Bills through the air. Instead, Kansas City pounded its way to a 26-17 win.

Kansas City ran the ball 46 times for 245 yards, the most rushing attempts by the Chiefs in Andy Reid’s eight seasons as Kansas City head coach. Clyde Edwards-Helaire was the main man, racking up 26 carries for 161 yards (6.2 yards per carry). Backup running back Darrel Williams added six carries for 26 yards and a touchdown. His 13-yard score on fourth down late in the third quarter gave Kansas City a 20-10 lead.

The Chiefs used their next two possessions to run out the clock. They kicked a pair of field goals to keep Buffalo at bay.

“I want to throw it deep every time . . . But if teams are going to play us like this, we [have] got to show that we can run the football,” said Chiefs quarterback Patrick Mahomes, who didn’t throw as much as he typically does but was still effective, completing 21 of 26 passes (80.8 percent) for 225 yards and two touchdowns. He also had 10 carries for 36 yards.

Mahomes’ counterpart, Josh Allen, was much less effective, completing 14 of 27 passes (51.9 percent) for 122 yards, two TDs and a late interception with the Bills chasing the game trailing by nine. Allen had his moments, but ultimately he couldn’t find the same consistency as Mahomes as he struggled with accuracy in rainy conditions. Buffalo couldn’t get much going on the ground either, gaining just 84 yards on 23 carries.

7:57 p.m. — INTERCEPTION.  Daniel Sorensen hauls it in with one hand as Allen throws it up for grabs. That should do it.

7:38 p.m. —  Bills nearly recover a fumble, but the call is overturned as Edwards-Helaire’s knee was down before the ball was knocked loose. Kansas City ball, second and 14 on their 31-yard line with 5:20 to play.

7:18 p.m. —  The Bills stall out after a false start penalty turns fourth and 1 into fourth and 6, forcing a punt. The Chiefs get it back, but it’s at their 6-yard line with 14:27 remaining in the fourth quarter.

5:36 p.m. — TOUCHDOWN, CHIEFS.  Patrick Mahomes floats it to Travis Kelce, who rumbles forward for the score. Kansas City leads, 7-3 with 3:05 remaining in the first quarter.

5:27 p.m. — FIELD GOAL, BILLS.  Buffalo takes the lead on a 48-yard field goal by Tyler Bass, 5:42 left in the first quarter. Better drive from Allen that time, though he had a couple of chances for big plays and missed. Weather seems to be having a negative affect on both QBs on a few occasions.

5:15 p.m. —  The Chiefs move the ball to midfield but stall out. Bills get the ball back at their 32-yard line after a nice return by Andre Roberts, 10:09 left in the first quarter.

5:09 p.m. —  Three straight incompletions leads to a three and out on the opening possession for Buffalo. Kansas City takes over at its 17-yard line.

5:08 p.m. —  The Bills get the ball to start this one and Josh Allen look to lead the Bills to an early scoring drive.

Bills vs. Chiefs is not a “Monday Night Football” game, and is scheduled to start at 5 p.m. ET. Fox will broadcast the game nationally.

Joe Buck and Troy Aikman will be working their second game in as many nights with Erin Andrews on the sidelines. Former NFL vice president of officiating Mike Pereira will serve as the rules analyst.