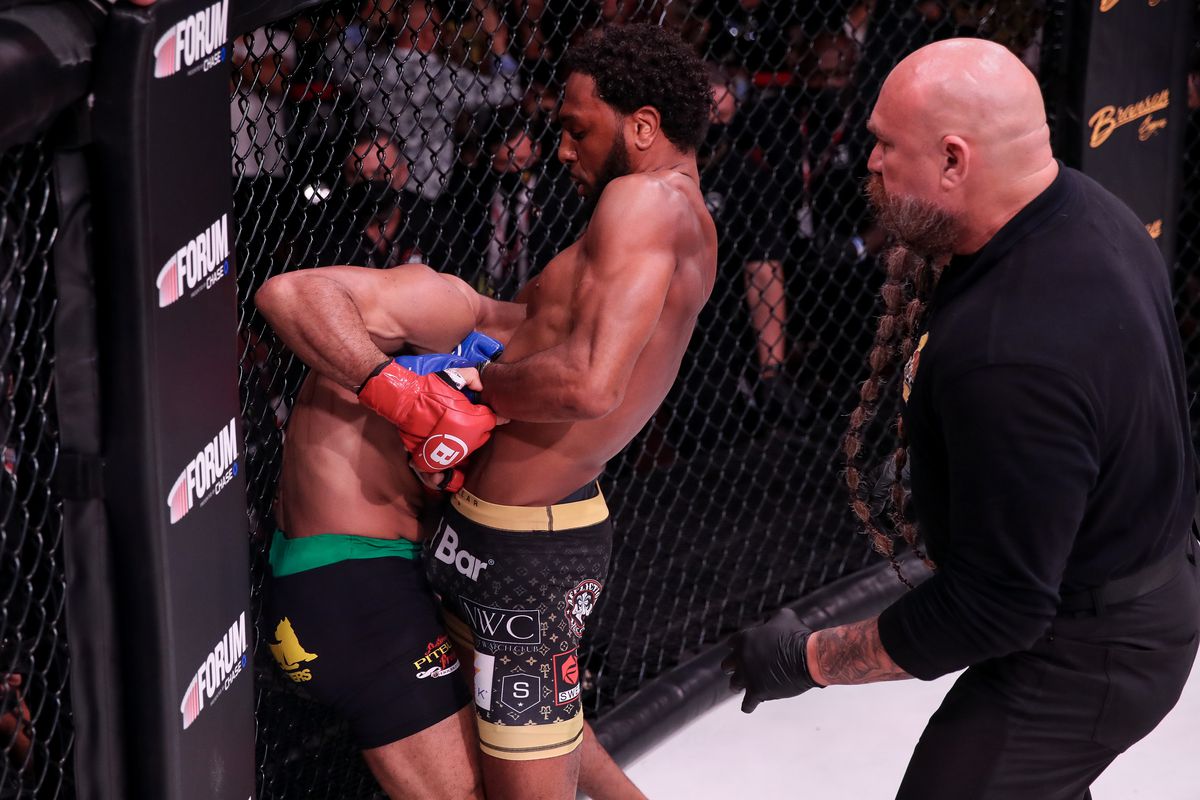 A.J. McKee won the Bellator featherweight title via guillotine choke at 1:57 of the first round in front of a loud, large crowd of audience at the LA Forum on Saturday night in the main event of Bellator 263.

When McKee, a native of Long Beach, California, walked out, the nearly sold-out audience erupted in applause and yelled “A.J.” before the fight began. When McKee won the fight, the Forum erupted, and fans rushed the cage, only to be halted by security. This was McKee’s biggest win of his career in one of the biggest fights in promotion history, a kind of torch-passing moment.

The halt was unexpected. McKee landed a left head kick on “Pitbull” and then came to a halt as if he had won. Referee Mike Beltran, on the other hand, instructed him to keep fighting. McKee then put a fragile Freire in a guillotine choke while both of them were still standing, and squeezed until “Pitbull” looked to pass out. Beltran stepped in and put a stop to it at that time.

Before Saturday night, “Pitbull” had only been defeated once in his MMA career, and it was in 2016 against Benson Henderson due to a leg injury.

ESPN had “Pitbull” ranked third in the world at featherweight when he arrived. Freire is Bellator’s most accomplished fighter, owning a slew of the organization’s most illustrious titles. He is also the Bellator lightweight champion, having defeated UFC lightweight contender Michael Chandler in the first round via TKO.

McKee is Bellator’s hot rising star, and he has the potential to be one of the biggest draws in MMA in the future. There was also bad blood here. At the news conference on Thursday, Freire and McKee almost got into a physical brawl, and “Pitbull” had to be taken off stage. Freire was enraged when McKee threatened to beat him in front of his wife and children, which followed after Freire threatened to beat McKee in front of his father and coach.

McKee (18-0) has won four consecutive fights. “The Mercenary” has the most straight victories in Bellator history (18), the most submission wins in Bellator featherweight history (six), and the most Bellator 145-pound division stoppages ever (13). McKee, 26, is mentored by his father, Antonio, who is a former MMA fighter.

Freire (32-5) came in on a seven-fight winning streak and has won 15 of his previous 17 fights. The native of Brazil has the most wins (20) and title fight wins (10) in Bellator history, as well as a tie for the most finishes with Chandler (13). Freire, 34, is a two-time Bellator featherweight champion who has successfully defended his belt seven times.